What's That Shadowy Head Next To Fringe? 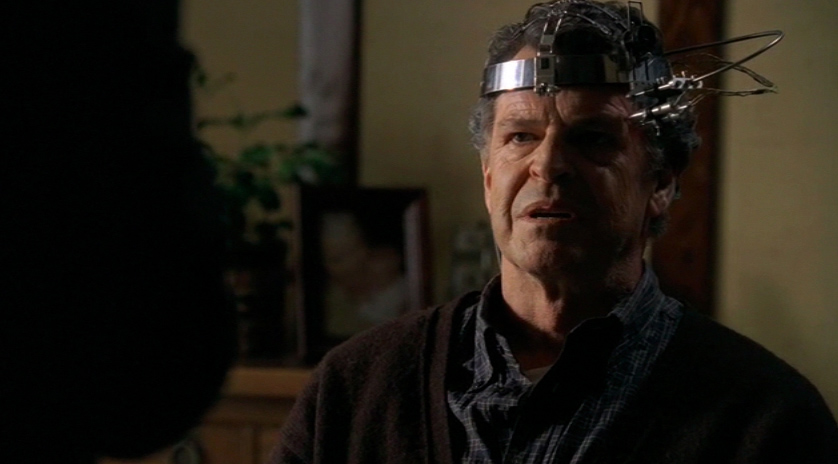 Here’s another thought on the visual tics of TV (I seem to be having a lot of such thoughts lately for some reason) which occurred to me while watching tonight’s very good episode of Fringe. If you look at what the directors do on this show, and many others, they usually try to have something else in the frame besides the actor. So when Walter Bishop (John Noble) is alone in the shot, but he’s talking to someone else, we’ll usually see the shadow of the other character’s head, or a wisp of hair, or an arm. Other times, the camera will move sideways while the character is talking, causing objects or shadows to move in front of him or her. A character might move into the shadows and the next shot will begin with a special effect of a shadow being “removed” from the frame, making it feel like somebody has walked out of the way (even though no such thing has actually happened). The point is that something usually has to be there; the director doesn’t want to let just the actor be alone, isolated in the shot, unless there’s a specific visual reason for it.

This technique is very common in today’s TV, and it’s one of the subliminal ways that television has conveyed a more sophisticated, cinematic look. It used to be very common for television scenes to alternate between tight medium close-ups where each character was completely isolated: they’d shoot a master, then they’d shoot one actor, then they’d shoot the other actor, and they’d cut between these three angles. What they don’t have time to do, in many cases, are the intermediate angles, the “over the shoulder” scenes where the other actor is actually in the shot, but seen from behind. What the modern TV director often tries to do is simulate that kind of shot; they don’t have the actor or even a convincing double to do the over-the-shoulders, but they put in something (like the shadowy outline of a head) to make it feel like there is someone else in the shot. This helps create that cinema-style look that TV aspires to, and avoid the choppy look that television drama was often associated with. It’s also a way of adding something to the composition of a shot that might otherwise look drab.

And finally, I suppose it’s also a way of dealing with the fact that most shows have to be filmed in such a way that the sides of the frame don’t matter: every show is now shot in widescreen, but they’re also supposed to be cropped for older televisions, and that means the side is going to be cut off in some versions. So the director must make sure that part of the frame is expendable — but he or she can’t let them look pointless or irrelevant to the compositions. The use of shadows, hair, arms (of extras, in short) helps to make that work.

As to what the subject heading means: I found myself calling John Noble’s Walter “Fringe” at one point, as in “Fringe is looking into the alternate universe.” I realized that just as Bart Simpson called Gordon Gekko “Wall Street,” I’m tempted to think of Walter as “Fringe.” Well, after all, he is the show.