Why Networks Prefer To Own The Shows They Produce 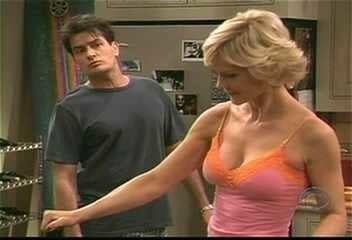 I mentioned a while back that CBS’s success with comedy has been achieved entirely with shows that are produced by outside companies. But networks still generally prefer to order shows from their own parent companies, and a recent lawsuit, filed just before Christmas (ho, ho, ho) reminds us of one of the reasons why: your own company is less likely to sue you (though it still can happen).

An ongoing dispute between Warner Bros. TV and CBS over “Two and a Half Men” has reached the courts.

Warner Bros. filed a $49 million suit against the Eye in Los Angeles Superior Court on Tuesday, arguing that the network has refused to pay sums it had agreed to hand over to the studio if “Two and a Half Men” turned into a hit.

Almost every show operates at a deficit early on, since the money that the network pays to license the show never covers the full cost of producing episodes. (That’s why syndication is the holy grail, the shankara stone, the ark of the covenant: that’s where you make money after losing money for four or five years.) Warner Brothers is basically claiming that CBS promised that if Men became hit, they’d pay back all the money WB lost in the early years, as well as increasing the license fee.

I have no idea who wins the suit (if it even goes to trial, which these things usually don’t) since the reports are very confusing about what CBS is supposed to have promised or what specific ratings feats Men had to accomplish to fulfil its part of the agreement. But that’s not the point; the point is that this is the kind of thing that’s more likely to happen when networks order their product from outside companies. (Even if this is an outside company that actually is partners with CBS/Viacom in the CW “network.” But they’re at least technically an outisde company.) Even though it’s just in-fighting and bookkeeping between big companies who spend most of their time trying to figure out ways to claim that they don’t owe their writers and actors any money, I kind of enjoy that kind of fight and find it, in a strange way, a sign of health, a reminder that hit TV shows are still valuable enough to be squabbled over by competing corporations.