Companies get colleges to do their training 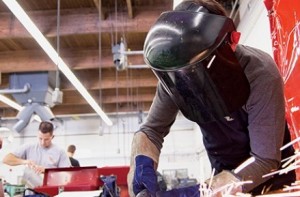 Amy Gordon was in the middle of completing her second university degree when she decided to go to college instead. Gordon already had a degree in biology from the University of Alberta, and was studying chemical engineering at the University of Calgary. “I was getting really tired of learning lecture-style theory. I had an itch to get more hands-on and learn more,” says the 29-year-old.

So she left U of C, and is now nearing the end of a two-year diploma program in instrumentation engineering at the Northern Alberta Institute of Technology (NAIT) in Edmonton. Gordon has been getting the hands-on training she wanted in labs supported by—and named after—Spartan Controls Ltd. The company has poured about $8-million worth of equipment into the program since 2007, essentially creating labs that replicate what it’s like to work in a refinery, giving students access to training on new technology.

Colleges and institutes across the country have long had a cozy relationship with companies and industries, with a goal of fuelling economic growth and funnelling students into vacant jobs. But with the country’s skilled-labour shortage worsening—it’s estimated to reach four million over the next quarter-century—worried companies are coaxing colleges into ever closer and more creative partnerships. In some cases, they’re even helping design new programs.

That’s what launched the energy-asset management program at the Southern Alberta Institute of Technology (SAIT). Energy companies were looking for workers with a broad understanding of the oil business, from managing joint venture projects to the actual flow of oil through pipelines. But that kind of interdisciplinary education didn’t exist, at least not in North America. “They saw the skill shortage and what people call ‘the great crew change’: baby boomers retiring and a lack of people coming into the industry,” says Gord Nixon, vice-president of academics at SAIT. So major players in the energy sector including Encana, Cenovus and Suncor formed the Centre for Energy Asset Management Studies and sent out a request for proposals for a new program, which SAIT won.

“They worked with us to develop the program and helped us raise $2 million” to fund it, Nixon says, noting that the provincial government wasn’t going to put up any money for the project. The first 64 students graduated from the two-year program in 2011, with a 92 per cent employment rate. “The direct customer is the student,” Nixon notes, “but the ultimate customer is the employer. When you recognize that you have two customers, then industry involvement is not seen as an interference.”

It was a similar case with last year’s ambitious expansion of the power engineering program, which trains people to operate and maintain machinery and boilers for large industrial projects. SAIT took a $3-million donation from Cenovus to help triple the number of graduates by 2016. Cenovus had determined it could employ every graduate of all the Alberta power engineering programs, and still need more workers, and it already helps fund the power-engineering centre at NAIT. There’s a critical shortage of power engineers right across the country, Nixon notes, and it’s not just in oil and gas. The mining sector, which also employs power engineers, is expecting one-third of workers to hit retirement age by 2015.

Colleges and companies are also co-operating closely to respond to major government contracts. On both coasts, colleges are ramping up to pump out a variety of graduates in the marine sector, thanks to the National Shipbuilding Procurement Strategy. It includes the building of new warships in Nova Scotia by Irving Shipbuilding Inc. The company has long-standing connections with Nova Scotia Community College (NSCC)—many of the teachers in the college’s marine programs are former Irving staff—and the company is giving $250,000 a year to NSCC for the lifetime of the shipbuilding contract to help recruit students into marine-related trades. The college will also be tailoring the training more specifically to the marine environment and launching new programs in areas of navigation and marine geomatics, notes the college’s president, Don Bureaux.

Similar work is under way in Victoria, where Camosun College is also looking to capitalize on the federal government’s shipbuilding plans. Vancouver Shipyards Co. Ltd. won the non-combat vessel contract, and Camosun is building a new Marine and Metal Trades Centre to meet expected labour demands in welding, metal fabrication, shipbuilding and repair. Students will be learning on the latest technology, says the college’s vice-president of academic, John Boraas, after Wärtsilä, a marine engine company, announced in January it will donate an engine worth $850,000 for training.

For smaller, more immediate labour needs, colleges can also react quickly, churning out new programs and workers in a matter of months. Bell Aliant, the telecom company, needed more fibre-optic technicians in Nova Scotia, so it contacted NSCC. Seven months later, a 16-week program had been devised, targeted at training Aboriginals. “Bell Aliant provided some equipment. They provided, from time to time, some personnel,” says Michael Kellaway, manager of flexible learning at NSCC. Graduates from the program are now working for Bell Aliant.

It may be surprising to many to discover the degree to which companies are outsourcing their workplace training to colleges, especially when some estimates peg business investment in education and training at just 1.5 per cent of the amount spent on salaries. But college presidents say these kinds of programs are doing precisely what they ought to be doing: supplying workers to industry. And it can be profitable. “We absolutely have a concern” about labour shortages, says Suncor’s director of talent acquisition, Michelle Dupont. It has led the company to invest more than $8 million in post-secondary institutions between 2010 and 2012. Those many millions of dollars in donations every year ensure more than skilled labour: they offer brand advertisements, an opportunity to push one company’s technology over another and influence top education decision makers.

College officials insist they maintain academic independence. No one company gains a stranglehold on a campus or its students, they argue, in part thanks to policies that welcome simultaneous funding from rivals. Take the example of Spartan Controls and NAIT. “We have some of their competitors’ equipment in these labs,” notes NAIT’s George Andrews. “There is no discomfort about our relationships back to industry.” As demand for skilled workers grows, it’s hard to say who stands to benefit more: firms with strategic alliances, or schools with soaring graduate employment rates.