In the skilled trades, the future looks better than the present

The oil crash will have an impact on grads entering the workforce this year. Fortunately, the future isn't all doom and gloom 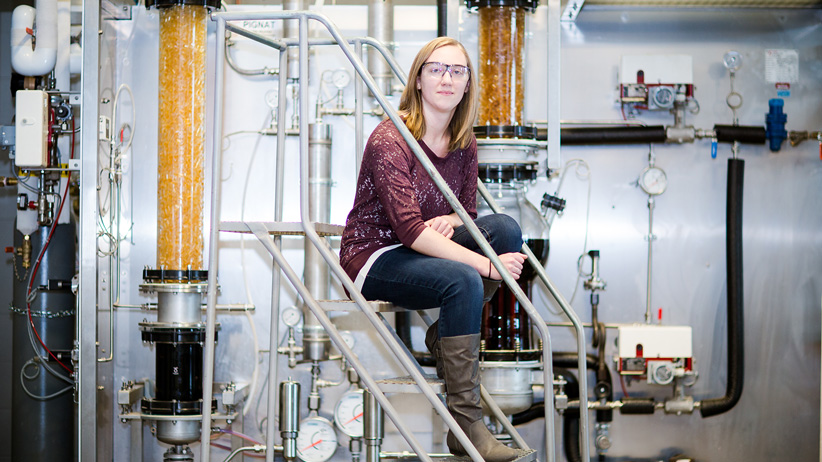 When Jodi Mowers enrolled in the chemical engineering technology program at Calgary’s Southern Alberta Institute of Technology (SAIT) in the fall of 2013, the oil and gas industry was filled with talk about the bounty of work opportunities coming down the pipe. With oil prices above $100 a barrel, new projects were sprouting up across the province and the industry faced a skilled-labour shortage. But when the 22- year-old from Medicine Hat, Alta., graduates next month, with oil in the $40 to $50 range, she will count herself among the lucky few if she can land a job in her field right away. “I’m not super-discouraged,” she says, “but [the job market] doesn’t look very promising.”

Crude tumbled to less than $43 a barrel, as of last week, and many new projects have been cancelled or postponed. Companies have resorted to layoffs or hiring freezes. As the Human Resources Institute of Alberta (HRIA) pointed out in its March job-trends report, the hiring binge is over. The institute’s hiring-confidence index, a measure of how employers feel about hiring over the next six-month period, fell to 52.3 from 58.1 a year ago. At the same time, HRIA noted that temporary layoffs are lasting longer. In the first half of last year, 55 per cent of laid-off staff returned to their jobs within three months, but that has dropped to half, while, over the same period, the share of temporary layoffs that became permanent rose from 10 per cent to 13 per cent. “Should the price of oil remain weak without finding its bottom, then expect temporary layoffs to increase overall as their length widens further,” the report said. 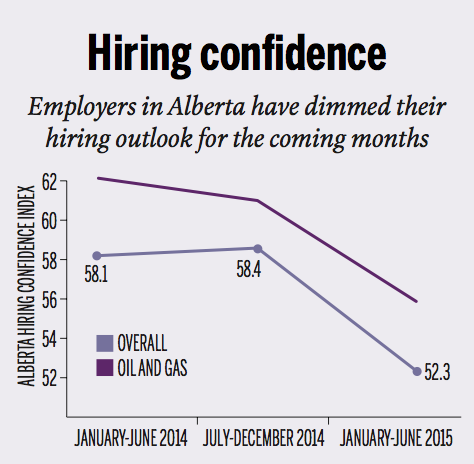 “The skilled-labour shortage will lighten up quite a lot,” says Todd Hirsch, chief economist at ATB Financial. “We’re already seeing over the last couple months, especially February, layoffs in those skilled trades.” That means new graduates like Mowers entering the labour market will face competition not just from other grads, but also from contract workers and those recently laid off.

“There’s less of a demand for many of these technical positions or jobs in general,” says Chris McNelly, chief executive of HRIA. “You’re also going to see the shift from buy to build, in the approach to talent management.” In other words, companies are going to opt for the cheaper option of training the workers they already have rather than engaging in bidding wars for talent.

Related: Can the mining industry recover?

It’s not all doom and gloom, and experts see this as more of a slowdown of growth than a downturn. Forty-four per cent of organizations plan to add to their total employee counts over the next six months, according to the HRIA report. And while fewer job openings aren’t great for workers, they actually afford industry the time to compose itself as sanity returns to the job market. HR professionals aren’t facing a glut of job openings, as they were this time last year. With a more manageable demand-to-supply ratio of jobs, they can scrutinize applicants a bit better and find the right fit.

Nor has the problem of an aging workforce gone away. Over the next decade, almost a quarter of employees in the oil and gas industry will be eligible for retirement, which should open up around 45,000 jobs, according to a 2013 study by the Petroleum Human Resources Council of Canada. “The jobs are still there,” McNelly says. “Essentially, we’ve gone from great to good.”

With new technologies on the horizon in the oil sands, the slowdown also offers an opportunity for companies and prospective employees to deal with the skills mismatch in the industry. “A lot of people might now use the opportunity to return to school and increase their skill set,” says Carol Howes, director of the petroleum human resources division at Enform Canada, an oil and gas safety association. “This is a good time to do it and prepare for when the markets do turn around.”

So for those who want to acquire a trade for work in Alberta, experts say the low oil prices and hiring freezes shouldn’t discourage them from acquiring the necessary skills. “Unless,” says Hirsch, “they’re graduating this spring, in which case they might have some trouble finding work. [Two years from now], I think Alberta’s energy sector and Alberta’s economy is going to bounce back.”

Many of Mowers’s classmates already figured as much, and are opting to pursue further education, she says. “They don’t think they’ll get jobs, so they’re not even going to try to look.” Mowers herself, however, doesn’t have the money for another degree and will be on the hunt for work come April. “I’m trying to stay positive,” she says. “I don’t have a backup plan for what I want to do if I didn’t get a job.”