The workplace of the future will probably remain under surveillance 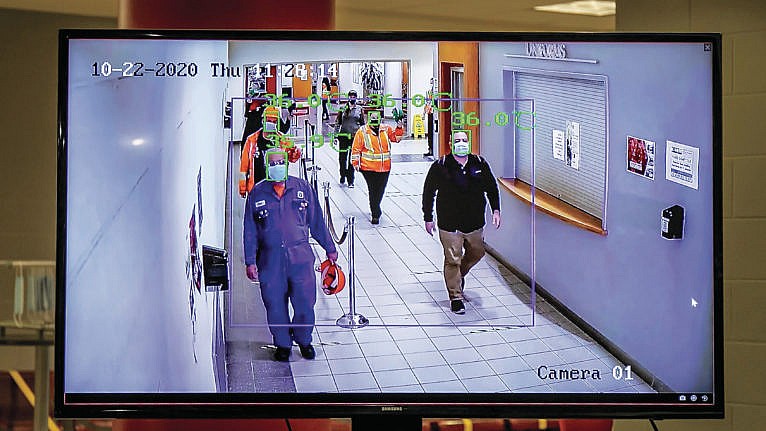 Workers are screened for COVID-19 as they enter the Toyota plant in Cambridge, Ont.(Courtesy of Toyota Canada)

In a video he recorded on his smartphone—in-person tours are out of the question these days—senior national manager of external affairs Scott MacKenzie demonstrates what the entrance procedure looks like for workers at the Toyota plant in Cambridge, Ont. He walks from the parking lot through a set of revolving doors, which have signs asking workers to please use their elbows to push them.

Distance markers on the floor remind people to stand six feet apart. There are four numbered stations to pass through: health check, hand sanitizer, mask, temperature check. At the health check station, workers enter information into a laptop confirming they don’t have any COVID-19 symptoms; at the temperature check station, a digital sensor confirms they don’t have fevers, storing that data along with an image from a surveillance camera for 24 hours.

“It was a big change for our team members,” MacKenzie says. “People had a routine and now they have a new routine.”

This is what going to work looks like for people across the country in the COVID-19 era. Canadian companies are rushing to fill the new market for digital tools to keep the virus out of workplaces, such as thermal scanners, contact tracing wearables and artificial intelligence-powered video surveillance software to monitor social distancing. People working from home, meanwhile, face digital monitoring of a different kind, with companies that sell software that tattles on employees who aren’t working during work hours seeing huge increases in demand.

Some of these digital tools are helping workplaces stay open and employees stay healthy, with Toyota Canada crediting its new procedures for the fact it hadn’t, as of October, had a single case of the virus being transmitted in its plants since bringing its 8,500 employees back to work in May. But technology experts are asking what will happen after the virus is gone and the security cameras remain wired into the walls. Thanks to the pandemic, the workplace of the future will likely remain under heavy surveillance, with implications for labour rights and privacy.

“There’s a big risk that the pandemic is leading us down this route of more extensive and long-term data collection that will eventually be unconnected to the current COVID-19 crisis,” says Sarah Villeneuve, a policy analyst at the Brookfield Institute for Innovation + Entrepreneurship, a think tank at Ryerson University in Toronto. “It might set us up for workplace environments where this type of software is normal.”

Since the spring lockdown, at least six Canadian start-ups have started selling software to help companies keep COVID-19 out of their workplaces. The market is proving lucrative. Calgary’s Provision Analytics, for example, has seen contracted revenue grow 20 times this calendar year.

Chief marketing officer Kevin Davies says the pandemic has inspired companies in the food industry to finally ditch their paper-based supply chain tracking systems in favour of Provision Analytics’ digital solution. The start-up’s software allows companies to verify employees are symptom-free before starting their shifts, trace those who need to be isolated and identify equipment to be sanitized in the event of an outbreak.

Companies that moved workers out of their offices and into their homes when the pandemic hit are reaching out to software providers for a different reason: to keep track of what employees are up to now that managers can’t see them. ActivTrak, a company that sells software that monitors how much time workers spend in various apps and includes an option to take screenshots at set intervals, says interest from new clients is double pre-pandemic levels. Hubstaff, which provides similar software, says the number of Canadian customers it serves has increased 293 per cent year-over-year, from March 2020 to early October.

READ: Personal care workers describe what led them to their jobs

The use of technology to monitor workers may be more intense than ever before, but the concept is as old as capitalism. In the 1920s, American farm workers started protesting the short-handled hoe, a tool that allowed supervisors to easily see who was taking a break because working with it required stooping over. While Canadian employers have the right to introduce monitoring technology as long as their workers consent to it, Toronto-based employment lawyer Andrew Monkhouse says they risk creating similar labour unrest.

“You’re going to get a lot of pushback from employees,” Monkhouse says. “You have to roll it out correctly or you’re really going to hurt morale.”

Léa, a Los Angeles-based graphic designer who asked that her last name not be used because she’s worried about the professional repercussions of speaking out, experienced just such a hit to morale when her biggest client asked her to install Hubstaff on her personal computer during a dispute about billable hours in late April. She says she seriously considered agreeing because the client accounted for about half of her monthly income, but ultimately decided to drop the firm because of the payment dispute.

“I didn’t think at that point I would be able to get other work. Everyone was super pessimistic. The quarantine had just started,” she says. “I felt extremely hurt by them asking me. It’s such an invasion of privacy.”

Monitoring technology meant to keep in-person workplaces safe from COVID-19 is getting a better reception from most workers. The Laborers’ International Union of North America is advocating for it, working with Richmond Hill, Ont.-based startup Facedrive to issue wristbands loaded with a contact tracing app to construction workers. Davies, the chief marketing officer for Provision Analytics, says unions and employees have been supportive of the start-up’s symptom monitoring app: “It’s the tool that enables them to feel safe in showing up that day.”

Brenda McPhail, director of the Canadian Civil Liberties Association’s Privacy, Surveillance and Technology Project, says feeling safe and being safe are two different things. She says she’s concerned employers might not be thinking hard enough about the personal health data generated by such technologies and whether the risk of privacy infringement is worth what might be marginal health benefits.

“In the security context, we talk about security theatre. I think increasingly what we’re seeing is health theatre. We’re seeing technologies being leveraged as a way of showing somebody is doing something that is protective, or has safety in mind,” McPhail says. “Sometimes it’s all just for the show, because there’s really no evidence that it’s going to be effective.”

At Toyota, it’s impossible to know how much of the company’s success at keeping COVID-19 from transmitting in the workplace is thanks to technological measures and how much is due to other policies, like its rule that workers must be either six feet apart or separated by a physical barrier at all times. When the carmaker brought people back to work in May, MacKenzie says it was prepared for questions about how it would protect workers’ privacy with the data it collects through the temperature scans and symptom checks, but didn’t receive a single one.

For now, many workers may be happy to trade some privacy for increased safety and the ability to keep their jobs. But McPhail says employers shouldn’t add surveillance technology without thinking about the trade-offs. Companies that didn’t ask enough questions about how to properly safeguard the data collected might come to regret their choices if it gets hacked, leaked or abused.

“In times of crisis, we’re increasingly coming to see technology as a magic fix, a silver bullet,” McPhail says. “There’s a real question as to whether the potential benefits outweigh the incredible intrusion into people’s lives.”

This article appears in print in the January 2021 issue of Maclean’s magazine with the headline, “The boss is watching.” Subscribe to the monthly print magazine here.