Kim's Convenience: A TV first that doesn't buckle under the pressure 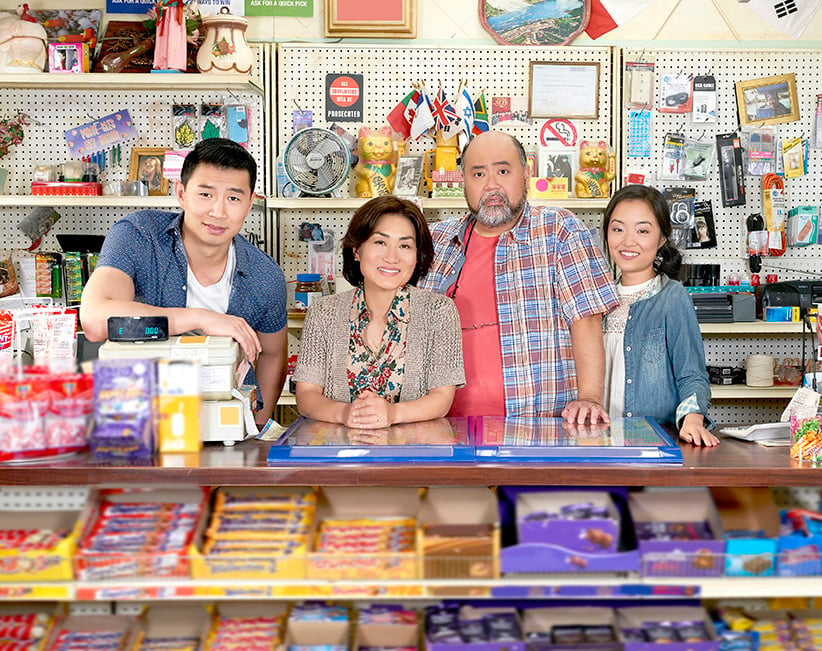 The cast of the new CBC sitcom, Kim’s Convenience, stand together for a portrait. The show will premiere on Tuesday. Oct. 11. (CBC)

Two gay men enter a convenience store in a gentrifying Toronto neighbourhood and ask its cantankerous Korean shop owner if they can put up their Pride Week poster. He stiffly declines. “I have no problem with the gay,” he says, continuing to restock shelves. “But I have a problem with the parade: traffic, garbage, noise. If you is the gay, why can’t you be quiet, respectful gay?”

The little scene says a lot—about immigrants’ inquisitive relationship with unfamiliar communities, to the idea of the “model minority” that hangs over so many Asians in North America. But it also says that Kim’s Convenience, which premieres Tuesday, isn’t what many might prejudge it to be. With a not-so-PC introduction, it dismisses fears that the show could be a treacly and bland “diversity effort” from a vanilla public broadcaster. And while Kim’s Convenience is making history—it’s Canada’s first TV sitcom led by Asian actors—it shows that just because it’s a cultural first, it’s unwilling to be anything other than a charming, effervescent, and modern sitcom. Model minority bedamned.

But its creator demurs. “Thinking about it now, and I didn’t even think about it until now—it is kind of a gutsy first scene,” said a laughing Ins Choi, 42, who wrote the much-loved play that forms the foundation of the series. It wasn’t even intentional—the decision to vault the audience right into a world that remains oddly unfamiliar to many Canadians, and eschew the scene-setting norms of a pilot episode, came from a last-ditch pitch about the idea of a “gay discount” to network execs. “The executives chuckled, but they were also kind of worried. And it was just happenstance that it was the first episode.”

That kind of inadvertent success feels right, given Choi’s trajectory. Kim’s Convenience was his first-ever play, a simple effort at writing what he knew—and the touching script he wrote, about a Korean shop owner and his immigrant family, turned into a monster success. It sold out a string of Toronto Fringe shows in 2011 before a national tour and a smash run at Toronto theatre company Soulpepper.

MORE: The tricky politics and practicalities of actors doing accents

It wasn’t long before TV and movie producers began clamouring for an adaptation. But Choi, who even today feels wowed by the success of his play, didn’t feel quite ready for it. “I was in no rush—but I was scared, and I didn’t want to make a mistake. Everyone smelled…not fishy, but not warm,” he said. “Whenever there’s a person of colour, whether it’s an artist or writer or producer, there’s so few of us out here that whenever there’s a little bit of opportunity, it’s like, ‘Don’t ruin it for all of us, okay?’ And then people had such a rich experience with the show, I didn’t want anything to taint it. There was a definite palpable pressure.”

He put the time to good use. He worked on other shows. He toured Kim’s Convenience nationally, finding success in big theatres in communities like Winnipeg and Port Hope, Ont. That tour gave the pair that help form the heart of the play—storeowner Appa, inhabited by Paul Sun-Hyung Lee, and his religious, hopeful wife Umma, played by Jean Yoon—more time to live in the characters. That move paid off when the CBC cast Lee and Yoon in the same roles for the TV adaptation; the fact that they’ve played them for years gives the show a big, confident head start.

“It was so striking finally hearing my own dad’s voice and seeing my family’s story depicted so authentically,” says Lee, who plays Appa—Korean for “Dad.” “I knew I wanted to be part of this.” 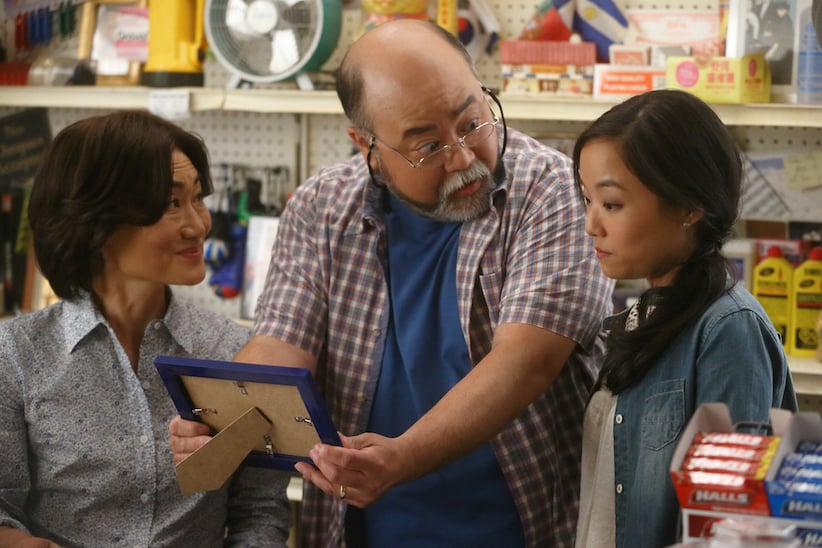 In the meantime, the landscape for Asians in pop culture shifted, even if ever so slightly. Before the cancelled Selfie and 2015’s Fresh Off the Boat—now entering its third season—there have only ever been a handful of shows that featured Asian leads: the vapid spinoff Mr. T and Tina, Margaret Cho’s doomed All-American Girl, the Maggie Q vehicle Nikita, and CBS’s Martial Law*. The yellow-face shadow of Sixteen Candles‘ Long Duk Dong looms large as Asians remain limited to somewhere on the miniature spectrum between kung-fu master to nerdy friend. “I’ve played a doctor so many times, I told my mom, ‘I don’t need to go to medical school, I know what it’s like from TV,’ ” said Lee.

Less representation on screen also means fewer opportunities for Asians in the industry. “There’s a dearth of Asian actors, especially of a certain age,” said Lee, 44. “You start off wanting to be a lead of a series or this or that, and it becomes very apparent that you’re not going to get these opportunities—you don’t look a certain way, or there’s no opportunities for you that aren’t ethnically specific. So you’re caught feeling like you have to play the same stock stereotypical characters. As an older actor, you can drive yourself mental getting over that fact.”

But for proof of the pace of TV’s belated revelation that everyone’s stories are worth telling, look no further than the quick-rising career of Simu Liu, who now has prominent roles in both Kim’s Convenience and the upcoming NBC series Taken—despite entering the industry less than five years ago. (Disclosure: The author and Liu are friends from high school, where they performed together in an all-Asian boyband, because of course they did.) On Kim’s, he plays Appa’s troubled heartthrob son Jung, in a “bit of a conscious choice,” according to Choi, and as Liu chuckles, it makes him one of the first Asian men to be sexually objectified on Canadian TV—a small strange thing perhaps, but not insignificant to a demographic that’s so often represented as the emasculated eunuch. “It is a huge achievement, to be objectified,” laughs Liu, 27. “But having positive Asian role models is a big thing, I never really had that growing up.”

But he’s deferential to the work that paved his way. “Whatever trouble I’ve experienced as a performer of colour absolutely pales in comparison to what Paul and Jean endured. It means there’s been real progress that’s been made—and there’s work to go and room to grow in the future.”

What makes Kim’s Convenience work, though, goes beyond the Korean heritage that the show refuses to leave behind—it’s because of the universality of its spirit. That’s intentional, Choi says, adding that he and his writing partner, Kevin White, didn’t initially model the show off Fresh Off The Boat or Master of None, Aziz Ansari’s exploration of being Indian, but rather shows like Louie, Arrested Development, or Modern Family. “We wanted not to serve the audience too much, but hang back and hope they come toward us. We didn’t want to force-feed to the audience what they were seeing, or translating it for them. You write for the intelligence of the audience, that was definitely part of the strategy around the show we wanted to create.”

That’s an attitude usually gifted to shows that bear far less pioneering pressure than this one. And so, that gutsy first scene. In a country where a CBC/Angus Reid poll suggested that 68 per cent of Canadians agree with the bloodless, senseless conceit that immigrants “should do more to fit in better with mainstream Canadian society,” where its politicians toy with the idea of “values,” and where, despite that, Canadians smugly believe their race issues aren’t nearly as riven as America’s, Kim’s Convenience is perhaps necessarily bold.

“That first scene will make some people feel a little awkward, not knowing whether to laugh, or if they can laugh,” said Choi. “I mean, the idea of the ‘model minority’ doesn’t really translate over to LGBTQ groups, but that’s in there too. We’re asking: What kind of Syrians do we like? What kind of lesbians are acceptable?”

So there are no apologies for making Canadians think about immigrant issues, right away. There’s no handholding explanation of the role of the convenience store in Korean life. No justification or Anglicization of Appa’s thick immigrant accent, an accent that Lee is proud of. No warning or explanation when one parent or the other slips into Korean. Kim’s is just a TV show, using its big shot to be bold, be itself, and be good. Radical, indeed.

Correction, Oct. 11, 2016: A previous version of this post suggested that there were only two shows with Asian leads before 2014. There have been at least four.