A world of economic hurt awaits Canada's next government 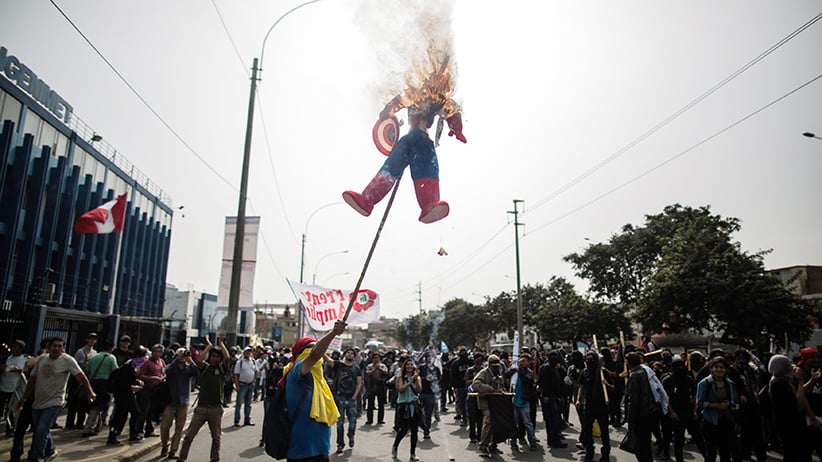 The skies over Lima are often grey. Last week was no exception, making it the perfect setting for the annual jamboree of economics and finance that accompanies the annual meetings of the International Monetary Fund and World Bank, the institutions created after the Second World War to provide balance to the global economy. Hundreds of finance ministers, central bankers, financiers and economists clogged the Peruvian capital’s already thick streets, as police escorts guided their shuttles and sedans to public talks and private meetings. They were a gloomy bunch. “The world is not in crisis, but there’s a great sense of unease,” said Tharman Shanmugaratnam, Singapore’s deputy prime minister.

Harvard University economist Lawrence Summers set the tone, using a newspaper commentary to label the current situation the most dangerous since the investment bank Lehman Brothers collapsed in 2008 and sparked a global financial crisis. The IMF last week openly discussed the possibility of stagnation, as it cut its outlook for global economic growth to a meagre 3.1 per cent. The meeting concluded with no clear commitment to do something about the situation, as there was no consensus on what could, or should, be done. What characterized the meetings was a sense of powerlessness. “This is a pretty unforgiving environment,” Bank of England governor Mark Carney said. “It’s not the type of economy in which one can make mistakes. And it’s not the type of economy in which, if one has some misfortune, or made a mistake, one has the luxury of time not to react.”

This is the world that awaits the winner of the federal election next week. There will be no hiding from it, because, as a relatively small, open economy, all storms tend to shake Canada’s shutters and rip shingles from the roof. The collapse in commodity prices, especially that of oil, caused the country’s economy to contract in the first half of the year. Tepid global demand will hurt, because Canada’s exporters already struggle to compete with upstart trading powerhouses in Asia and Latin America. The dollar could weaken if investors continue to shy from risk. In theory, that will be good for Canadian exporters—though it hasn’t helped very much yet—but it will also make it more expensive for Canadian companies to import machinery and parts. It will also make it more costly for Canadian companies to pounce on acquisitions abroad to expand. Canada’s next prime minister will not have full control over his promise to boost the economy; fulfilling those promises will require understanding the world’s suddenly tricky economic currents.

There are so many red flags in the global economy, it’s difficult to choose where to begin. Nouriel Roubini, one of a handful of economists said to have foreseen the financial crisis, counts 10 things that could cause trouble, if they aren’t doing so already, including the bursting of asset-price bubbles, unusually weak business investment, and extreme income inequality. “We are living in a world of volatility, uncertainty,” he said. Yet Roubini’s list omitted two of the biggest questions being asked in Lima, perhaps because they were too obvious. First: What is going on in China? Second: When will the United States Federal Reserve raise interest rates?

China is growing up, and that means its adolescent economy, naturally, is slowing down. After years of double-digit growth, the country’s gross domestic product will expand by 6.8 per cent in 2015 and 6.3 per cent in 2016, according to the IMF. This is what Beijing wants. The boom was driven by an unsustainable level of public investment and an overdependency on exports. The plan always was to create an economy like that of the U.S., which generates most of its economic activity at home through domestic consumption. Maurice Obstfeld, the IMF’s chief economist, said China’s services trade is “booming.” But its manufacturers are suffering. Equity investors endured one of the nastier stock-market tumbles in memory this summer, dealing a blow to confidence. Beijing’s desperate attempts to contain the damage suggested there are limits to the government’s technocratic prowess.

It would be one thing if this were Vietnam, another communist country in Asia, only considerably smaller. (Vietnam, actually, is one the few economies that is performing decently at present.) But China is massive, and many countries had come to depend on its voracious demand for commodities. Take Peru, a big miner of copper. China accounts for about half of the world’s imports of metal, compared with about 10 per cent a decade ago. When a buyer that important visits the market less often, only one thing can happen: oversupply. Prices have plunged, altering the world’s ability to generate wealth, create jobs and reduce poverty. In Lima, officials lamented the loss of “potential,” or the maximum rate at which an economy can grow without stoking inflation. Think of the human heart: There is only so much exertion each one can take before it red-lines. Same with economies. Peru’s finance minister, Alonso Segura, told an audience of bankers that a big drop in potential output cost his country two percentage points of growth. Peru has lots of company. Even the Bank of Canada says the Canadian economy can no longer grow as fast as it used to because of the collapse in oil prices.

Some question whether the real economy is as bad as volatile markets make it appear. The cost of commodities such as copper, natural gas and wheat once was set primarily by the laws of supply and demand. That’s much less true now. Betting on commodities has become a popular game for the gamblers at the Wall Street casino. On the weekend, Bank of Canada governor Stephen Poloz told a group of reporters that about 90 per cent of the oil price was the result of the “financialization” of energy markets. For this, the Fed must accept some of the responsibility. Its aggressive post-crisis monetary policy to drive down interest rates made the buying and selling of bonds unprofitable. So traders ventured elsewhere in search of yield. They bought the debt of companies in emerging markets. They borrowed money cheaply in the U.S., and used it to buy assets in places where returns were higher. They purchased farmland and pieces of paper whose value was tied to oil and metals.

There is more risk in these unconventional assets than most investors care to stomach. As soon as interest on bonds begin to rise, conventional wisdom dictates that all that money will rush back to the safety of U.S. treasuries. This is already happening, which is one reason financial markets have become so volatile. The Fed’s leaders earlier this year indicated they would raise their benchmark interest rate from effectively zero before the end of 2015. There are only two months left in the year and the Fed still hasn’t done it, passing on what some saw as a golden opportunity in September. The indecision is starting to wear on people. “I’d like to see the Fed tighten,” said Brian Porter, chief executive officer of Scotiabank. “It feels like it is the right time to do it.”

Unlike Canada’s other big banks, Scotia does significant business outside North America. Porter made a bet on Mexico, Peru, Chile and Colombia, countries that form a South American trading area called the Pacific Alliance. Those nations should have bright futures. They have young populations that are getting steadily richer. But all are heavily dependent on trade. Some worry about what will happen to them in the months ahead, especially if the Fed’s eventual interest-rate increase becomes a trigger for capital flight. Emerging markets were in a position to take growth for granted and, now, some could get burned by complacency, said Reza Moghadam, vice-chairman for global capital markets at Morgan Stanley, a New York-based investment bank. Carney said the biggest threat is all the debt governments and companies in emerging markets piled up in the post-crisis years when international investors were happy to lend to them. He said regulators and bankers must be ready to deal with a significant increase in defaults.

Porter said he worries about the volatility in financial markets. “If you are in the mining business, this is your financial crisis,” he said. Yet he doesn’t accept the Summers argument that the economy has shifted permanently into a lower gear, a condition called “secular stagnation,” in which savings dwarf investment. Porter counters with his investment in Peru. “We can run a very good bank at two to three per cent growth,” he said. Maybe the current state of the economy is simply a matter of perspective? Peru averaged annual economic growth of more than six per cent for the 12 years until 2014. That’s what drew Scotiabank to Peru. The calculation would be more difficult today.

Like Porter, Canada’s central bank governor thinks commentators are overly negative on the state of the economy. “Uncertainty is two-sided,” he said on the weekend. Certainly, Canada is benefiting from its deep ties to the U.S., one of the stronger economies at the moment. A surge of investment south of the border would change Canada’s prospects markedly. But that remains a hope, while the malaise that has descended on the global economy is real. “Everyone needs to recognize there isn’t going to be a big surge of demand from abroad,” Carney said.

Investment and growth-enhancing policy changes such as freer trade and efforts to increase the number of working women are badly needed if Canada aspires to something better than mediocrity. All three parties have promised policies that would help. The winner must be prepared to implement them quickly.