Why Jeffrey Simpson is both right and wrong about Keystone

On GHG emissions and the environmental assessment

Today’s Globe and Mail column from Jeffrey Simpson takes on the question of Keystone XL and greenhouse gas emissions.  For the most part, Simpson is correct—the final environmental impact statement is not a green light, its conclusions do hinge on the assumption that the pipeline changes nothing with respect to the oil sands production decision, and it does conclude that oil sands emissions are higher than the emissions from the crude currently being run in the Gulf Coast refineries served by Keystone XL. His conclusions on these issues are not dissimilar from what I wrote in this space when the report was released.

What’s off, however, is Simpson’s conclusion that, “if the Obama administration wants to focus only on emissions within U.S. territory, and not on global emissions, it could argue that saying no to Keystone will help cap emissions in the U.S.” That conclusion is not supported by the State Department report (see Volume 4-14). 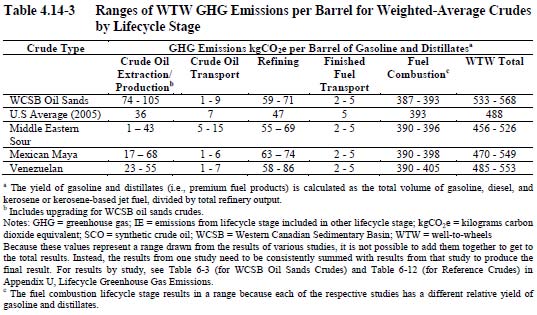 If you look at the figure above, you’ll see the comparison of greenhouse gas emissions between oil sands crude and the Mexican and Venezuelan crude it would displace. The total emissions (right-hand column) are, indeed, higher with oil sands by a significant margin, but the added emissions are all on the production end of the process (left-hand column). In terms of emissions which would occur within the U.S. (refining), as well as emissions which would occur partially within the U.S. (combustion), oil sands crude would be expected to generate lower emissions within the U.S. The environmental assessment also goes on to discuss emissions from the combustion of petroleum coke and other by-products, which are slightly higher with oil sands than with Mexican or Venezuelan crude, but not significantly so.

As the graphic below shows, the incremental emissions associated with crude displacement (excluding the question of whether oil sands crude would be produced anyway and any emissions from rail transportation) are actually less than the difference in total extraction emissions.  In other words, quite opposite from what Jeffrey Simpson argues, the State Department Environmental Impact Assessment shows that U.S. emissions would likely be lower with the pipeline than without it.

So, even if you ignore the issues of whether or not the oil would be produced as Simpson suggests you should, the question for the President coming out of the final environmental assessment is not one of capping U.S. emissions, but rather a question of the degree to which he wants to use U.S. domestic policy to cap emissions in Canada and substitute those for fewer emissions in Mexico and Venezuela.