Should professors speak out more? 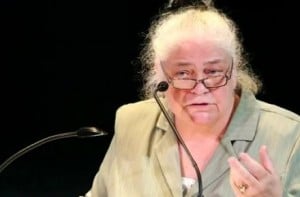 Mary Eberts at Congress (from FedCanada)

Mary Eberts was a junior law professor at the University of Toronto in 1974 when she told her colleagues she planned to miss the July 8 faculty meeting to help get out the vote for Pierre Elliot Trudeau. Their reaction was bewilderment. Professors weren’t often politically involved.

Eberts got her day off and then left U of T in 1980 to join a Bay Street Firm. She remained an activist, giving her time to organizations like the Native Women’s Association of Canada.

Now she’s back in the academy as the Ariel Sallows Chair in Human Rights at the University of Saskatchewan. Three decades after her first academic job, she says it’s just as difficult for professors to get involved in civil society and speak out about their political beliefs. She argues Canadians are losing their expertise as a result.

I sat in on her talk at Congress 2012, Canada’s largest gathering of Humanities and Social Sciences, in Waterloo, Ont. (click to see a recording) and then I interviewed her in her house in Toronto’s Annex neighbourhood. Here’s what she said about why professors so often stay silent, why she believes they shouldn’t, and how to square civic activism with their roles as teachers.

Should professors step up and engage more in civic life, even when it’s politically controversial?

Yes. I gave an example [in my speech at Congress] of a group of environmental law professors who are now putting forward a letter of concern that the Government of Canada is using the budget process to repeal or alter a lot of environmental laws. One of my colleagues who has taught environmental law for 30 years, said “I haven’t seen anything like this in 30 years, we should really be sounding the alarm here.” When someone with that degree of knowledge say this is worth sounding the alarm about, then people listen, and you can trust what they say.

Is there a certain point where an academic gains enough authority that he or she can speak out on things? Or would it be as appropriate for a PhD or a post-doc to speak out?

I would like to think that students as well as professors would be bringing their knowledge and their perspectives to public debate. But my concern is that there are many vulnerable members of the university community who are not as free to do that. Doctoral students are one category and professors or teachers who are not in the tenure stream are another.

Unless a doctoral student is under the wing of a very powerful professor who himself or herself is doing this initiative, then I believe it’s somewhat dangerous to speak up. Because those people don’t have, for the most part, strong collective agreements, measures can be taken to thwart their careers without much notice being taken of them.

What forms of civic engagement do you think are appropriate for professors?

Some of them are very substantial, like the professors who have left the university either temporarily or permanently to run for office. The former mayor of Toronto, David Crombie, Monique Bégin from Montreal, and the political science professor from Alberta, Ted Morton…

Another category is university presidents who had been on the National Action Committee on the Status of Women, or professors who have been involved in organizations that have been seeking social justice and social change like Amnesty International or the Women’s Legal Education Action Fund.

In another category altogether, there are also these occasional forays issue by issue into public speech. When the [Mike] Harris government came into power in Ontario and was implementing its Common Sense Revolution, there was a coalition of professors from U of T and York who put on a public meeting to talk about what all this meant.

What about things like Occupy—going down to St. James Park [the movement’s Toronto base] and being a part of that? Do you think that’s appropriate for professors?

I think that if you are a professor and you want to engage in something like the Occupy Movement or go and march in the Labour Day Parade, you do that as a citizen and you don’t necessarily have, by reason of being a professor, any more to bring to that than anyone else.

I think as a professor you have the same limitations on you as everybody else, and that is that you do things peaceably and with respect for the views of others and that you don’t use the demonstration to violate the rights of others.

But you see a chilling effect that prevents non-tenured professors from participating in those civic activities?

Of all of the applications for doctoral fellowships put in to the university to pass on to SSHRC, 37 to 40 per cent of the applications actually got through the university screening method. So that’s 60 per cent of those applicants who aren’t getting hired because their university won’t put them forward. We don’t know why the university chose not to put them forward, but a young academic trying to make good decisions for his or her career is going to say, “geez, I guess I better not piss anybody off.” The way to be successful is to be the least objectionable to the most number of people.

What would you say to parents who are concerned you’re using university time to do political things?

Just because I’m a professor doesn’t mean that the university owns me 24-7. I have as much right to be a citizen as anyone else. But then you get into the question of how well and how sensitively do I engage in my civic activities. I think it’s really important—essential—for any professor who’s engaged civilly not to force their views down the throats of students.

When you’re in the classroom, you’re not trying to convince the students of your opinion?

We have to realize that every teacher—whether he or she is wearing their opinions on their lapel or not—has opinions. A basic tenet, in my opinion, is that it’s always more fair if the students know where the teacher is coming from. If you’re a well-known peace activist for example, and you teach in a history department… your obligation is to not penalize students who are not peace activists.

I don’t know if you’ve heard, but there’s a Carleton University professor who taught a class on climate change and he doesn’t believe climate change is man-made. His fellow profs have condemned him, but Carleton administrators stood by him. What do you think of that?

How does he treat his students? Does he evaluate students fairly? If he gets student essays and they’re arguing climate change is man-made, does he fail them all just because he doesn’t agree with that basic principle? Or does he give them fair evaluation? That’s the test.

You allude to the fact that tenure protects freedom of speech. You argue that professors without tenure are more vulnerable when they civically engage. Why does it matter?

This is an issue of great importance to potential students and parents of potential students, because often those people, those nontenured people, are quite good teachers. This point was made in the [January 2011] article in Maclean’s. Students really bond to them. They’re dedicated teachers. But the university doesn’t respect them. It doesn’t give them the time to do the full range of academic work. It doesn’t give them any time to write. It doesn’t give them any opportunity to prove themselves. It doesn’t even give them the basic respect of knowing two weeks before they’re going to teach that they’ve got this class to prepare. To me that shows a lot about the respect that a university has, or doesn’t have, for undergraduate students and the families of those undergraduate students who are often struggling to send them to university.

[The administrators] are saying, we’re happy to let the serfs, these people who are not in the tenure stream, teach 40 to 60 per cent of the undergraduates. If a university is prepared to use slave labour to teach all those students who, with their parents, are busting their butts to get an education, does that show the university respects them? I don’t think so.

You call these tenure-less academics a lost generation? What do you mean?

Just at a time when we need of good practitioners of democracy, we are loosing the university as an incubator of democracy.