The Cougars? The Redmen? Oh, how offensive!

The naming of sports teams is now fraught with peril 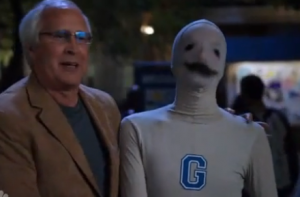 The Human Beings Mascot from Community on Citytv

One of the best running gags in the TV show Community is that Greendale College’s teams are called “The Human Beings”—an absurdly bland moniker designed to insulate the school from complaints and controversy—the sort of complaints levied periodically against the Cleveland Indians or the Washington Redskins.

The fictional school’s feckless Dean might have a point, though, because naming sports teams, at schools especially, is now fraught with peril.

This danger was underscored last week when Utah’s Corner Canyon High School had to do away with its team name “Cougars.” The term, which, in some circles has come to mean an older woman sexually interested in younger men, was the subject of complaints. Canyon teams will now be “The Chargers.”

The Cougar incident is an instance of a public too eager to complain, and bureaucrats too eager to avoid controversy,  but there are plenty of cases where team names seem genuinely objectionable in retrospect, or poorly chosen from the outset. Controversy erupted recently when the new London, Ontario baseball team was named “The Rippers” complete with a mascot called Jack in darkly-covered Victorian garb. Team officials say that the name refers to “ripping” the cover off the ball (even though the conventional expression is tearing the cover off the ball) not to the infamous Jack the Ripper who killed numerous women in that other London. I remain unconvinced.

A more common offense to women is the habit of calling male sports teams by the regular name and denoting the female teams with a qualifier.  Indeed, when I was an undergraduate it was still common to refer to Western’s male sports teams as “The Mustangs” and the female teams as “The Lady Mustangs.” Feminists, rightly to my mind, complained about this usage because it implied that the male team was the real team and the ladies’ team was some lesser version. I had thought this usage had fallen by the wayside (like “lady doctor”) but a reliable source informs me that at Laurentian University, for instance, the teams are known as the Vees and the Lady Vees.

Perhaps even more controversial are team names that use racially charged appellations. Folks at the University of North Dakota were incensed by the NCAA’s policy to discourage racially-based team names, a policy that threatens their “Fighting Sioux.” Canada is not immune to such problems, either. Last year a Saskatoon high school was embroiled in controversy over its “Redmen” name and its red-faced, feather-adorn logo. Such crude appropriations are not racist in the worst sense, but are insensitive and cavalier and are rightly falling by the wayside.

The situation at McGill University, where the teams are also called “Redmen,”  is more complex. Sports Information Officer Earl Zukerman says that the origins of the name go back to the 1920s when “Red Men” referred to the colour of the hockey team’s uniforms. Later, though, designers assumed that the name referred to Aboriginal Canadians and for many years some Redmen logos, including one displayed on the football helmet, featured elements meant to evoke that group. Those designs have since been abandoned, but the name remains, no doubt the subject of some future brouhaha.

Stories like these surely bring sighs of relief at schools with more innocuous nicknames. I’ve seen no reports yet of depressed people offended by “The Varsity Blues” or overweight people offended by “The Huskies,” but as the fictional Greendale Human Beings remind us, innocuous names are not always without their drawbacks. I always giggle a bit when I remember that the University of Ottawa teams are called “The Gee Gees.” Meanwhile, here at Cape Breton University, my friends root for “The Capers” which sounds fine if you are from Cape Breton (where people proudly think of themselves as “Capers”) — but everywhere else, a caper is a kind of pickled bud used in cooking. If it were up to me, they would be called The Highlanders.

Oh wait. That might not work. Scottish Canadians are probably already penning letters of protest.