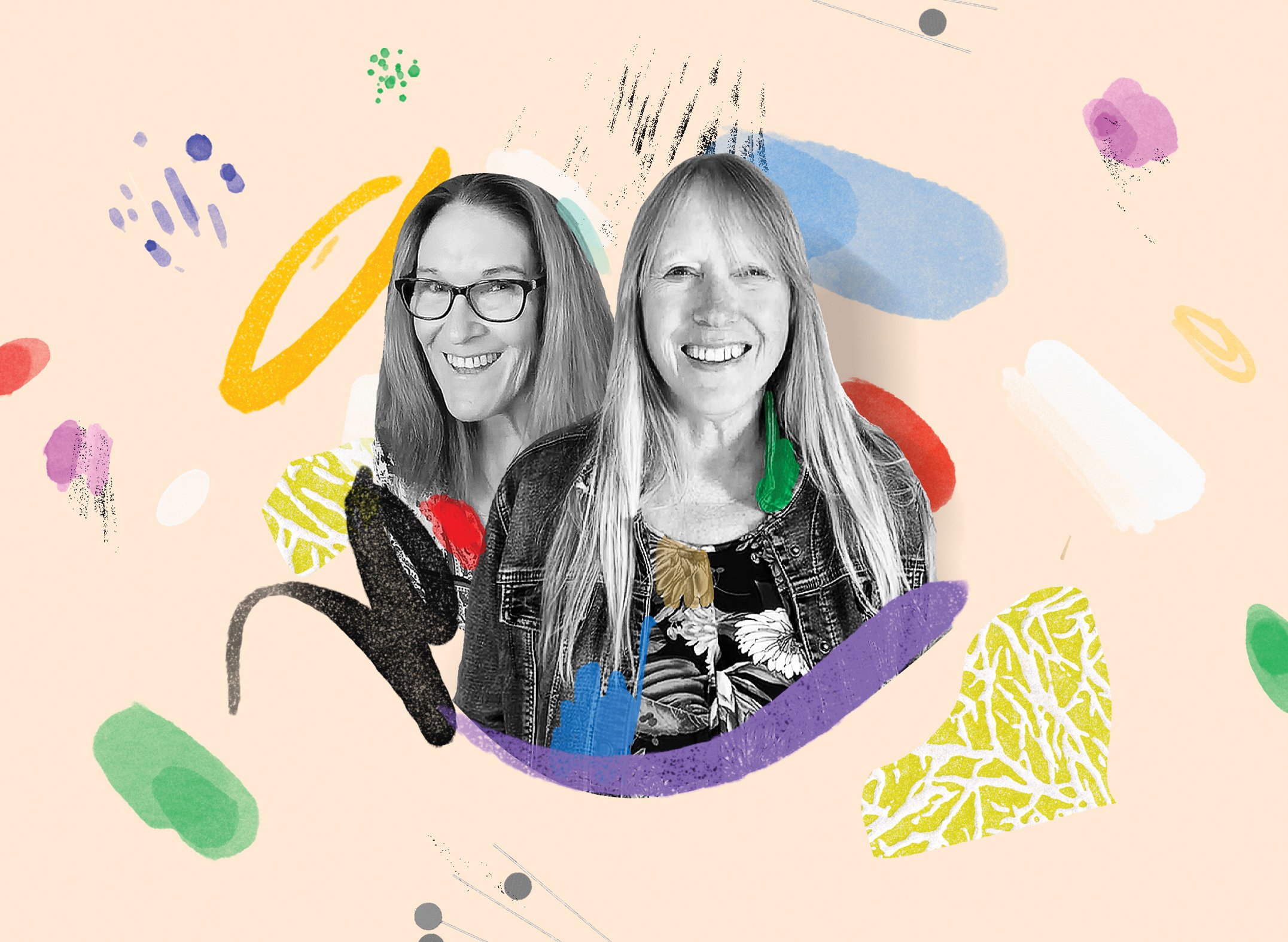 After an Alzheimer's diagnosis, these sisters became Tiktok stars

Two women in B.C. show that you can own your dementia—one irreverent TikTok at a time

A few years ago, Kathy Collins was running her own art supply store and art school in Calgary when she began to experience troubling symptoms. She had always been a workaholic, capable and driven, but suddenly, in her early 50s, she was having cognitive glitches, like forgetting to place orders for the store. Her older sister Jean Collins noticed that when they spoke on the phone, she was forgetful and uncharacteristically weepy. While Kathy at first hid her struggles, she eventually admitted that things had gotten so difficult that she couldn’t run the business and was filing for bankruptcy.

Jean, who was living on Vancouver Island at the time, went to Calgary to help Kathy through the process. Once she was with her sister in person, the scale of Kathy’s difficulties became clear. She had lost weight because she wasn’t cooking or eating, and she was neglecting personal care and housekeeping, while fixating on repetitive activities like playing mah-jong. Alzheimer’s didn’t occur to them at the time, but it was clear that something was very wrong. Initially, Kathy’s doctor tried medication to treat depression, but she continued to struggle. A few months later, Jean persuaded her sister to visit Vancouver Island for a week. She never left.

It took months of medical visits to get answers, and when Kathy finally learned she had early-onset Alzheimer’s, the devastation of the diagnosis was eased by the relief that she finally knew what was going on. First, the sisters lived together in Jean’s home, and Jean even hired Kathy to work at the residence for adults with disabilities where she was a manager. But as the disease progressed, they both stopped working and moved in with their octogenarian parents in Cobble Hill, a farming village in the Cowichan Valley just north of Victoria.

By the spring of 2020, Kathy had established a routine of swimming and attending a day program on a farm caring for horses once a week, getting around using a transportation service for people with disabilities. But then the pandemic hit. The life they had built was wiped out, and they both suddenly had a lot of time on their hands. One day about two months in, Jean, otherwise a Twitter addict, downloaded the TikTok app out of sheer boredom. They were immediately hooked. “It’s just bursting with creativity, and it’s funny and moving,” Jean says. “So we were just in our rooms scrolling.”

The Kathy Project’s look at life with Alzheimer’s can be moving, or unapologetically funny. A sampling: 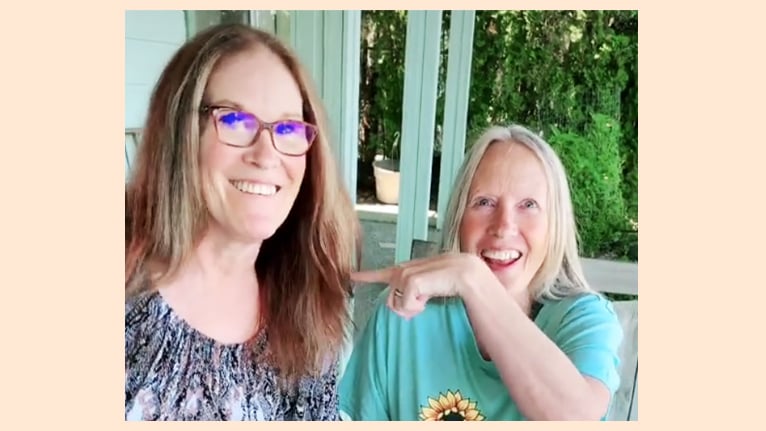 August 2020 25,200 views Kathy and Jean do a quiz: who’s had the most success with men (Kathy), who talks the most (Jean) and who is physically strongest (Kathy). 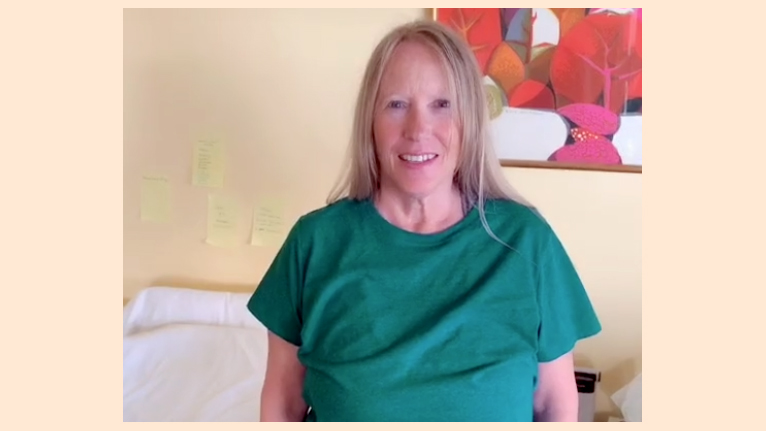 June 2020 90,200 views Kathy talks about her transformation, from not wanting anyone to know she has Alzheimer’s to sharing the experience with the world. 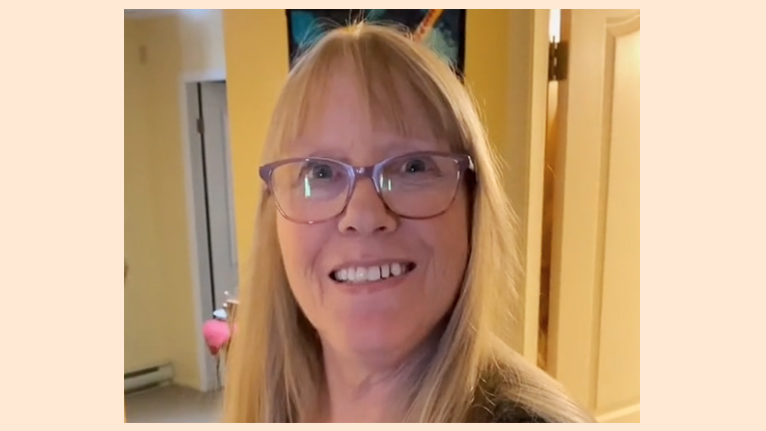 January 2022 51,900 views Kathy and Jean stage a comedic recreation of life with Alzheimer’s, complete with repetitive questions and bloopers.

After a couple of weeks as admiring viewers, they decided to make their own TikTok. In it, “Jeanie behind the camera,” as she introduces herself, interviews Kathy briefly about having dementia. Kathy explains the sticky notes on her bedroom wall that serve as reminders. She describes the worst part of dementia—no longer being able to drive—and the best: “I can rewatch movies all day long and say, ‘Jean, this is a great movie!’ ” They both crack up at that.

It was their third video that made them bona fide TikTok stars. In it, Kathy stands outside their parents’ house, wearing a long denim jacket, with a bird chirping somewhere in the background like it’s been hired for an idyllic spa soundtrack. Jean holds the camera and offers interview prompts, asking about the big decision they recently made. “We moved into our parents’ basement,” Kathy replies, her eyes widening in comic horror. But while things are hard, they are also great, Jean says, panning to show Mill Bay sprawling below the backyard of their house.

When Jean swings the camera back to her, Kathy leans in conspiratorially. “Living with the parents at this age is just highly unusual,” she says. They explode in more uproarious laughter, and instantly, you understand why 1.6 million people watched this video and 138,000 love the sisters enough to follow them on TikTok now.

As with all of the videos that would follow, it’s matter-of-fact, even buoyant, smart-assed and empowered. As a snapshot of life with disability and serious illness, Kathy and Jean’s TikTok account has little of the treacle or tragedy usually associated with the subject. “My gig is that, yes, I have Alzheimer’s, but there’s more things to it,” Kathy says in an interview.

RELATED: Why TikTok food is ugly and disgusting and completely addictive

On TikTok, they are known as the Kathy Project, which aims simply to spread comfort and love to people with Alzheimer’s and their families. That, and comedy. “Kathy always says those are our stripper names,” says Jean. “She’s Comfort, I’m Love.”
An entire community has grown among the other disability- and dementia-focused TikTokkers they chat with and follow. In comments, a parade of people wish them well, asking nervously for advice about their own dementia worries, or admonishing Jean to talk less and let Kathy talk more. She knows, she’s working on it, it’s been this way all of their lives. People recognize Kathy when they go out shopping, a TikTok celebrity in their midst.

They know there will come a time when the videos will have to stop, to safeguard Kathy’s dignity. But she trusts Jean to know where that line is, and it’s still a long way off. For now, there are their hundreds of thousands of viewers, a steady stream of viral hits and a community where you own your dementia, but it doesn’t own you.

The appeal of the Kathy Project is simple and obvious to Jean: it’s Kathy, and it always has been. “It’s been like that for your life. People have always liked you,” she says to her sister. “Thank you,” Kathy exclaims, as though she has just won an unexpected Oscar. They double over laughing, side by side on the bed like teenagers.

This article appears in print in the May 2022 issue of Maclean’s magazine with the headline, “Sister act.” Subscribe to the monthly print magazine here.