A budget to drive Newfoundlanders away

Facing a huge deficit, Newfoundland and Labrador chose to heap taxes and levies on its labour force—and send a dire message to its young people 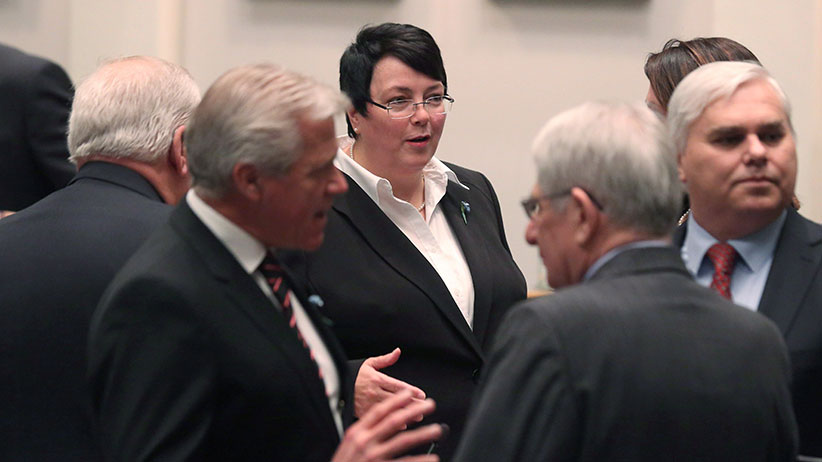 Newfoundland and Labrador Finance Minister Cathy Bennett makes her way past colleagues after presenting the 2016 provincial budget at the House of Assembly in St.John’s, Thursday, April 14, 2016. (Paul Daly/CP)

As expected, Thursday’s Newfoundland budget proved a fount of nausea-inducing numbers—but the most disturbing can be found in the province’s birth and death rolls, not its red-splattered balance sheet.

Since 1971, Newfoundland and Labrador has gone from boasting the country’s lowest median age, 20.9, to its highest, at 45. That’s five years older than the Canadian median.

Why does this stat line matter? Because the script that Finance Minister Cathy Bennett wrote for Newfoundland’s fiscal crisis is sure to make matters worse, driving away the young, hard-working people she desperately needs. Instead of addressing the collapse in oil royalties with an aggressive cut to provincial spending—à la Ralph Klein in 1990s Alberta—Bennett has looked almost exclusively to the revenue side, jacking up everything from provincial income taxes to the fee for licensing an old Edsel. The government even flip-flopped on its recent decision to hold down the HST.

The most infuriating move to many Newfoundlanders, however, will be the imposition of a “deficit reduction levy” ranging from $300 to $900, depending on income. A worker making $49,500, for example, would pay $600; someone making $74,500 (considered middle-income in Toronto) will pay $750. People making more than $202,499 (not unheard of among tradesmen working the province’s mega-projects) will shell out the full $900.

Which brings us to the age thing. Because, symbolically speaking, it’s hard to imagine a money grab more repellent to a working-age person than this “temporary” measure. It as much as admits that the reward for getting a job, working longer hours or earning a long-awaited raise is the privilege of bailing the government out its budgetary bind. Even after hiking taxes on incomes and gas, and after raising fees for insurance, birth certificates and death certificates, Bennett evidently sees no option but to fish in Newfoundlanders’ pockets for whatever nickels and dimes are left.

Some already appear to be voting with their feet. After four years of healthy growth, the size of the province’s labour force declined in both 2014 and 2015. It now stands at about 269,200, down about 5,600 from its peak in 2013.  With their job options dwindling, and their government apparently bent on taking from them whatever it can, young Newfoundlanders are once again boarding planes and ferries in search of brighter prospects.

Did Bennett have other options?

Surely. This is a province where gross provincial spending rose from $5 billion at the start of its oil boom in 2005 to $8 billion in 2015. Per capita, Newfoundland routinely spent 20 to 36 per cent more during that period than the average of other provinces, hiring workers and doling out raises. No one relishes the thought of laying off public-sector workers, or cutting cherished services. But the numbers alone called for a more equitable distribution of pain.

Instead, the government sought to minimize public-sector job reductions, saying it would cut 650 positions from a public service of 46,000. The projected savings from its cost-cutting, alas, will cover just $243 million of what would have been a $2.7-billion deficit. The heavy lifting is instead to be done through a projected $647 million of tax and fee hikes, which are supposed to pull this year’s deficit down to $1.83 billion.

By imposing these burdens, the government hopes it can buy some time, while continuing to fund the services required by a population only beginning to exert the full weight of its need on the provincial treasury—in health care, home-care and ancillary services.

How many working-age people will stay in Newfoundland and keep paying? That, apparently, is a question for another day.