Being transgender in the Canadian military

Experts say there is a higher proportion of transgender people in the military than the general population. Why they choose to serve. 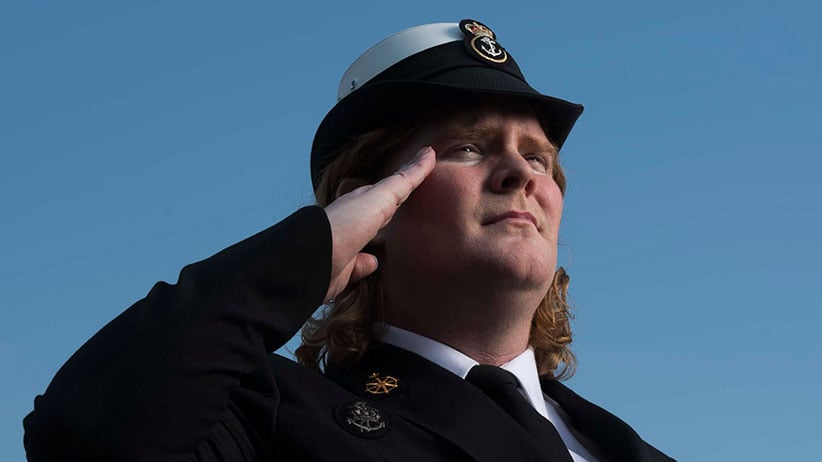 Leading Seaman Danielle Dewitt poses near HMCS Toronto on a jetty in the Canadian Forces naval dockyard in Halifax. (Photograph by Darren Calabrese)

Though Leading Seaman Danielle Dewitt hails from landlocked Calgary, she always knew she wanted to work on the water.

“I’ve seen the land, I’ve seen the sky. Let’s see something I haven’t seen before,” she recalls thinking as a young adult before joining the Canadian Armed Forces naval reserve in 2006.

And though Dewitt, now 35, was assigned the male gender at birth, she knew always something was wrong with that identity. When deployed in the Mediterranean on HMCS Fredericton in 2015, she came out as a trans woman to her commanding officer during the NATO mission Operation Reassurance.

She had been spotted by someone from the ship while dressed as a woman at a hotel and, rather than hide, took charge of her uncertain future.

“I informed my chain of command that my intentions upon returning to Halifax was to transition from male to female,” Dewitt said. But the mission came first. “I started the deployment as a male and I would finish it as a male,” Dewitt said from Halifax, where she is on light duties while recovering from gender confirmation surgery earlier this year. She was previously a regular force boatswain.

That day and the rest of the deployment went on as normal. The only thing different was Dewitt’s sense of relief. She quickly obtained clearance to start dressing as a female sailor, and a medical diagnosis of gender dysphoria to spur further transition.

“The big secret was out, there was no turning back, and I could finally be who I know I am.”

In a series of tweets in late July, U.S. President Donald Trump suddenly reinstated the ban on transgender troops that Barack Obama had lifted the year before, citing “disruption” and “tremendous medical costs”—though it was later reported the military spent more on Viagra. On Aug. 25, he signed an order formally ordering the Department of Defence to reverse Obama’s order, though it remains unclear how the controversial directive will be carried out.

In contrast, the CAF responded to the Trump missive not with criticism, but with recruitment in a tweet of their own: “We welcome (Canadians) of all sexual orientations and gender identities. Join us!”

In Canada, LGBT people have openly served in the armed forces since a 1992 federal court ruling. A transgender policy has been in place since 2012, with an update expected late this year.

While the U.S. and Canadian militaries don’t collect LGBT statistics, a widely-cited study from the Williams Institute on Sexual Orientation and Gender Identity Law and Public Policy at the UCLA School of Law suggested there actually may be a higher proportion of transgender people in the military than among American adults generally.

The same may be true in Canada.

“It’s hard to get an estimate, but certainly discussions among a number of different countries suggest it’s likely there may be more trans individuals serving in the military than in the general population,” said Alan Okros, a professor at the Canadian Forces College in Toronto and an expert on diversity in the military.

Right now, it’s believed around 300 transgender members serve in the CAF. That amounts to about 0.45 per cent of the active armed forces that in May totalled 66,225. About half a per cent of the general population is believed to be trans. Dewitt and others believe the 300 figure is low. That best guess is based on word of mouth and the number of people accessing the medical system for hormone therapy or surgery.

As for why transgender people find an unlikely refuge in the armed forces, experts have floated a theory of meritocracy.

“One of the things the military tries to emphasize is this idea of not being discriminatory, and respecting the dignity of all people. There’s a reputation that says the only thing that matters in the military is whether you can do the job,” Okros said. “I think for some people, there’s a perception the military can be a more welcoming place, provided you’re competent and can do the job, than many civilian employers.”

For Dewitt the calculation was simple. She wanted to sail. And she felt safe doing that dressed in navy blue.

“For me, it was the lack of gender. The uniforms are exactly the same, except our dress uniforms,” she said. “We all do the same job, we’re all expected to do the same thing. There’s no difference.”

There are subtler reasons a trans person would be attracted to a masculine, heteronormative culture, said Amanda Ryan, president of Ottawa-based Gender Mosaic and member of Trans Equality Canada, which advocated for recent changes to human rights legislation to include gender identity.

“There’s a fairly high proportion of trans people who join the military or take ‘he-man’ jobs, particularly the male-to-female trans person. The military represents manliness and that appeals to a trans person who is trying to push that part of their personality aside,” Ryan said.

This phenomenon, known as a “flight into hypermasculinity,” was first described in a 1988 study, “Transsexuals in the military,” published in the Archives of Sexual Behaviour.

While Okros believes there are more trans females in the military, there are trans men as well, who may be attracted to the freedom of embracing a masculine identity. As one advocate put it, “there’s no battle for femininity” in the uniform.

“Canada has been one of the most progressive militaries in the world when it comes to LGBT community since the 90s, when it allowed gays and lesbians to serve,” said Kristopher Wells, University of Alberta professor and faculty director at the Institute of Sexual Minority Studies.

The armed forces now see diversity as a recruitment tactic as it aims to add 3,500 full-time members and 1,500 reservists over the next 20 years. “As long as you get the job done, and you want to serve your country, that’s the bottom line. We value our people and that’s why we invest so much time and energy into policies like this,” said Lieutenant Colonel Sarah Heer, director of the Human Rights and Diversity Directorate for the CAF, who is leading work on the diversity policy.

On the day Trump’s tweets caused widespread confusion and outrage, Heer was in Washington to participate in a panel discussion about Canada’s diversity strategy.

There are, however, still problems with the military. A 2015 report on sexual harassment in the military found “an underlying sexualized culture in the Canadian Armed Forces that is hostile to women and LGTBQ members, and conducive to more serious incidents of sexual harassment and assault.” In a 2016 Statistics Canada survey of 960 regular force members, about one in three reported having seen, heard or personally experienced discrimination on the basis of sex, sexual orientation or gender identity. Four in five agreed that the CAF took the complaints seriously and did not tolerate that conduct.

RELATED: How the U.K. is at the vanguard on transgender equality

A 2013 report prepared by the military academic Okros, based in part on interviews with four transgender members of the army, navy and air force, indicated that while improvements have been made, “a degree of open misogyny, homophobia and transphobia” remained that had led to trans members changing units or leaving the military entirely.

The study concluded with optimism that “understanding and acceptance of trans issues will become the norm in the next few years.”

Sergeant Nina Usherwood, 55, an aircraft technician at CFB Comox was born a “base rat” to military parents. She joined the air force as a male at 17.

Usherwood remembers well the ban on “homosexuals” and people with a “sexual abnormality” and was witness to the years-long purge—one she called a “witchhunt” and which is now the subject of a class-action lawsuit.

Keeping her secret was necessary but “very, very isolating,” Usherwood said.  “I lived with fear for decades.”

She kept her door locked and made few friends.  To buy women’s clothes, she traveled hundreds of kilometres away from her base. But Usherwood came out as trans to her squadron chief in 2009, two years before there was even a policy in place.

“The reaction from my unit was very supportive, right from the very beginning,” she said. “It was like, ‘Okay. You’ve said this. Now we have to figure out how to make it work.’”

Usherwood had been with her unit for seven years, calibrating and maintaining 10,000 aircraft tools. “They knew who I was, they knew my work ethic. That helps a lot,” she said.

Over the decades, Usherwood has gone from living in fear to being commended for her “exceptional and insightful leadership on women’s and transgender challenges within and outside the military,” for which she received the Royal Canadian Air Force’s Deputy Minister Diversity Ambassador Award in July. She has made friends.

She believes in the future, gender identity will become as irrelevant as any other attribute.

Despite a mixed record, the CAF has made efforts to improve how it handles diversity in the ranks. At the highest levels, that includes Canada’s top military officer launching Operation Honour in 2015 to eliminate inappropriate behaviour. At the base level, that includes setting up proactive “Positive Space Initiative” groups that identify CAF members from various ranks who can offer understanding and support to colleagues.

The first such group, at CFB Halifax, raised the base’s Pride flag this year. Through her participation in the project, Dewitt bas been asked to explain to other units the transition process and how to react when a colleague changes their name and appearance. The CAF is considering making this a more organized, national program.

“A lot of people are old-school and have never been around the LGBT community, or they know about being gay but they don’t know about being trans,” Dewitt said. “A lot of questions they have are, ‘if I screw up, am I going to get in trouble? How do I get around this whole transgender [name change]? Do I call you a she?’”

Dewitt reminds them rank has no gender.

“Just say LS Dewitt,” she tells them. “If you can’t use she/her pronouns just call me by my rank and last name. That’s how we are technically supposed to address someone.”