Carbon tax ruling is a modest win for Trudeau—but after a string of losses, whatever works 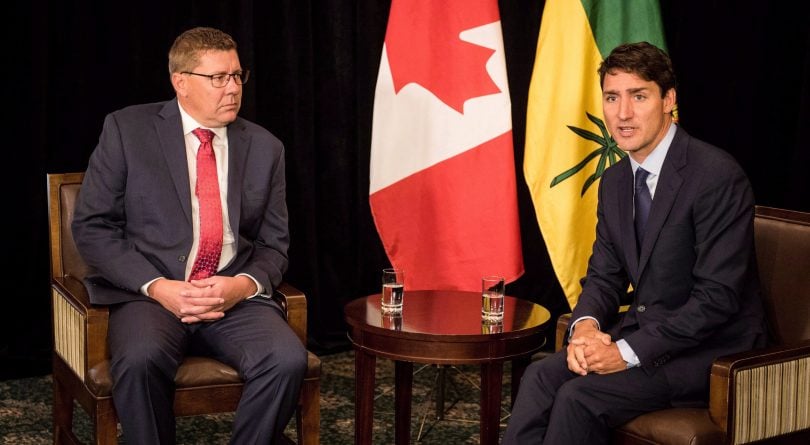 Let’s recap the last six months for Prime Minister Justin Trudeau. He became landed in the middle of a tug-of-war between China and United States over Huawei, prompting the vise of Chinese pressure upon imprisoned Canadian citizens and restrictions on agricultural products. He lost two top cabinet ministers and his principal secretary in a cascading scandal that revealed his utterly shaky crisis-management skills, and weakened his status as a feminist and partner in Indigenous reconciliation. And a few weeks ago Alberta, a populace he’s often strived to court, chose a new premier whose campaign relied on heavily disparaging  his opponent’s closeness to Trudeau.

But finally, on Friday, PMO aides could pop wine corks at the office—and not to drown their sorrows.

The Saskatchewan Court of Appeal’s decision to uphold of the federal carbon tax was a win for them to savour, if only because they’ve had so few in the last while. Yes, it was a narrow 3-2 verdict. Yes, Premier Scott Moe pledged immediately to take the case to the Supreme Court of Canada, which would probably keep the law’s status in limbo in 2020. And yes, another decision looms with Ontario’s constitutional challenge of the federal pricing plan, with both Manitoba and Alberta planning their own court fights.

But Trudeau and his team will gladly take this ruling, and shout about it from the rooftops. With the federal carbon levy backstop in place, they can now make the election a contest between their greenhouse gas strategy and whatever Andrew Scheer’s Conservatives put forward this summer.

And consider the alternative: The Grits are already lagging in the polls ahead of the Oct. 21 vote. If Saskatchewan’s high court struck the tax down, voters would be deciding between a probably weaker Conservative plan and a constitutionally fragile Liberal one. “Vote for us, and we’ll fight to save the planet assuming that we can persuade a panel of judges to find that other judges engaged in flawed reasoning!” would not be the best sales pitch at doorsteps in Oakville.

RELATED: Tiptoeing back to Trans Mountain

Jason Kenney, the newest provincial Blue Knight of the Resistance, found out Friday that the way he bashes carbon tax isn’t the easiest sell in some quarters (at least those outside Alberta’s borders). After he backslapped at Queen’s Park with fellow BKOTR Doug Ford, he delivered a speech to the Canadian Club of Toronto. As he trotted out his line about his province’s forthcoming Bill 1 to erase the NDP’s carbon tax—an easy applause line at all his Alberta campaign rallies. But from this business crowd, Kenney drew a hush by raising both arms above his shoulders in a defensive posture. “Now, I know not everybody agrees with this, although I think almost three-quarters of Albertans certainly do,” the new premier said.

The mood is different in Toronto, where Kenney came to drum up investment and wave his province’s own “open for business” placard. The major banks and many blue-chip companies support carbon pricing; they don’t see it as “punishing ordinary people for living ordinary lives.”

While the Alberta premier, like Ford and Moe, deems the carbon tax a measure that’s all economic pain with no environmental gain, the body of evidence suggests otherwise, Saskatchewan Court of Appeal Chief Justice Robert Richards wrote in his majority decision.

“Significantly, the factual record before the Court indicates that GHG pricing is not just part and parcel of an effective response to climate change. It indicates that GHG pricing is regarded as an essential aspect or element of the global effort to limit GHG emissions.” The judges used this as basis for their conclusion that setting minimum standards for carbon pricing ought to qualify as a national concern under the constitution’s peace, order and good government powers—the part of the ruling that might generate the most scrutiny ahead of a Supreme Court appeal. The Saskatchewan majority also dispensed with the Blue Knights’ claim the carbon tax is a cash grab, or even that it is a tax in the conventional sense, since by design the money generated does not go into federal coffers. In fact, it need not be generated federally at all, if it is a provincial tax as stringent or tougher than the federal minimum plan.

In responding to the defeat, Moe said Saskatchewan will continue to fight the carbon tax “with every tool in the toolbox”—language that echoes what B.C. Premier John Horgan said about the Trans Mountain pipeline. On both scores, the premiers may wind up being unable to find the right wrench to throw into the federal gears. Meanwhile, an interesting parallel is emerging between how conservatives fight the carbon tax and how environmentalists, Indigenous leaders and progressive politicians try to thwart pipelines: lob every jurisdictional argument and legal obstruction you can; if that fails, file a different court challenge by a different party; if that too fails, try bringing change through the ballot box  if that fails; or try bringing change through the ballot box. It’s a safe bet—we think—to assume Moe and Ford won’t hold sit-ins in the federal finance minister’s office.

In any case, the Liberal must enjoy the glow of victory while they can. This legal win landed the same day that CTV reported that Liberal MP Andrew Leslie is willing to testify against the government on behalf of Vice-Admiral Mark Norman, suspended in a case over alleged cabinet leaks. It’s been that kind of 2019 for them. Perhaps that bubbly on ice can serve dual purposes.