Colleen Jones on her brush with death and curling 'killer instinct'

'I was thankful to be alive, and I had these messages that I wanted to share,' says one-time curling champion Colleen Jones 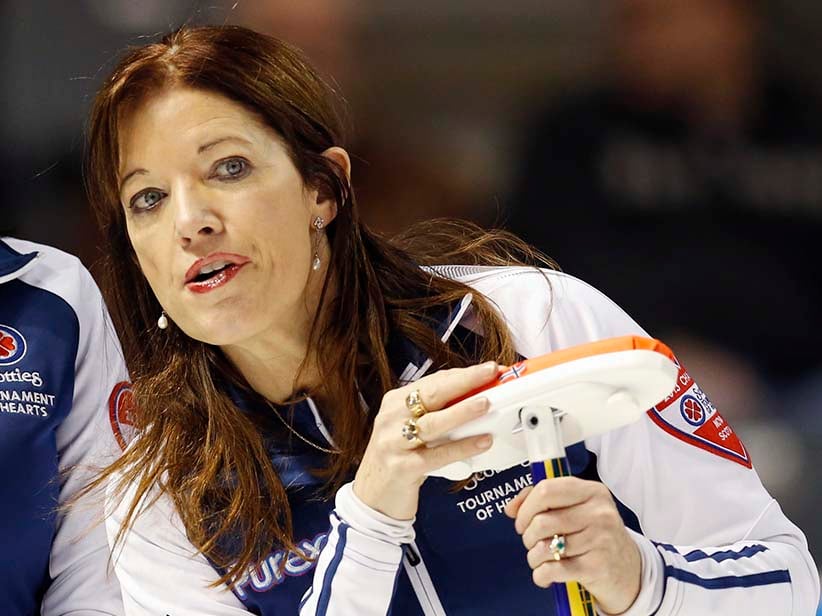 Colleen Jones is one of Canada’s most successful curlers, and is recognized coast-to-coast, thanks to her three-decade CBC television career. Her memoir, Throwing Rocks at Houses: My Life in and Out of Curling, written with journalist Perry Lefko, has just been published by Viking. She recently spoke with Maclean’s senior correspondent Jonathon Gatehouse.

Q: You start the book with the tale of a serious illness, a case of bacterial meningitis that you contracted in December 2010. Was it that potentially fatal experience that made you want to tell your life story?

A: Definitely. I had returned to the Scotties—the shrine of Canadian women’s curling—in 2013, and it was a place I didn’t expect to be at, even though I had been there many times before. So to come full circle after the close call with bacterial meningitis, and then brain surgery—it turned out that I had a hole in my head that they had to plug—so getting back to curling was the completion of the journey for me. And I definitely had the epiphany, or the glow you get, when you’ve just survived something. I was thankful to be alive, and I had these messages that I wanted to share.

Q: You mentioned the hole in your dura, the sac that surrounds the brain. You also write that you had been leaking cerebral-spinal fluid for four years. How is that even possible?

A: In fact, it was way more than four years. I can’t even document when the leakage started. I originally thought I had a sinus infection and got some antibiotics. They didn’t do any good. Then I thought I was allergic to everything; I have dogs and cats and I eat peanut butter and that must be why I’m chronically dripping. I just thought it was normal. As long as I kept my chin up all the time, nothing happened. So I changed the handlebars on my bike, then put up with it when I curled or did yoga. I never went to the doctor and said, “Yeah, I’ve got this annoying thing . . .” But they figured it out when I contracted meningitis and did surgery to correct it. And now I’m as good as new.

Q: Let’s change the subject. You’re one of nine kids, and you curled, on and off throughout your career with various siblings. Is there something about the sport that rewards the family dynamic? An advantage in communication?

A: There have been a lot of family teams, like Brad Jacobs and his brother and cousin, who won gold in Sochi. Russ Howard and Glenn Howard. But if you’re lucky on a team, even if you’re not sisters or brothers, you become such a family that you get that kind of open and honest relationship. Where the chemistry is great and even if tempers flare, you forgive each other. I was always looking for a sisterhood. You’re not always lucky enough to get that magical chemistry, but you can’t win without it.

Q: When you began curling, you say you weren’t a natural, but you loved it. How long did it take you to start feeling like it really was your sport?

A: The first couple of years of junior curling, I was still trying to figure out how to play the game and make the turns. Coaching wasn’t what it is now; you basically had to teach yourself in the 1970s. But I was determined to keep up with my big sisters and I did practise hard. Then I think I became a natural. I loved it early. I loved the chess-game-on-ice aspect, and I could see that I was getting better.

Q: Most Canadians know you from TV, where you seem like a very happy-go-lucky person. But you were very intense on the rink and not much of a good loser. How do explain that dichotomy?

A: My curling personality really had the killer instinct, compared to the real me. I kind of liken it to when a surgeon is going into the operating room and has to put his game face on. But in real life, he might be a charming guy to have a beer with. Everybody always told me that I had Maurice Richard eyes when I competed; that the intensity that was on my face was scary. But that was what I needed to bring when I stepped on the ice. And even to this day, when I get on the rink, that person comes out pretty quickly. My brain and body know that I’m going into battle.

Q: You write that you used to get very nervous, and often physically ill, before games. It sounds miserable. It made me wonder why you kept at it for so long.

A: Because I loved the game and I loved the social aspect of it, the team. It’s like if you had the same golf foursome for a long time, or if you’re a bridge player, or a beer-league hockey team. You start to look forward to that time together and camaraderie, and having something that you do just for yourself. The stress got a lot easier to handle when we brought Ken Bagnell, a sports psychologist, on board. He gave me strategies to handle my anxiety: meditating, listening to music. If we had found Ken earlier, we possibly could have had even more success, because I was getting in the way of myself.

Q: So conquering your nerves and doubts was the key to finding success on the rink?

A: It was, because nothing else changed about my game. Once I could control the mind better, things started working a lot better. Ken was magic for us. I was working on some of these things on my own, trying to be more mindful and stay in the moment, rather than what happened two ends ago, or the shot you just missed. And with Ken, that morphed into controlling my thoughts, staying more positive on the ice, and that was the turning point for us. We were the first to bring a sports psychologist to the national championship and, now, almost every team does. That positive thinking still helps me in my life today, like when I was dealing with bacterial meningitis.

Q: Your rink won its first Scotties Tournament of Hearts in 1982, and then you went 17 years before your next one. The sport changed a lot over that period. What was the biggest difference?

A: When I went to my first national championship in 1979, there were no fans in the stands. Then, in 1982, Scott Paper came on board and revolutionized women’s curling—they marketed it, they promoted it—and suddenly, there were 4,000 people there for each game. It was mind-blowing. And then CBC and, later, TSN started televising it. And that changed the stakes, too. Money came into play.

Q: You had a very long competitive career, and you and your teammates won six Canadian titles and two World Championships. You covered a lot of Olympic Games for CBC, but you never made it as a competitor. Is that a regret?

A: I don’t have any regrets, really. What I got out of the sport was more than I ever dreamed was possible. We took some good runs at the Olympics, but the closest we got was third in the Canadian trials. But I can’t ever say I regret that, because I loved the career we had. And for me, that was enough.

Q: Has your relationship with curling changed, now that you’re no longer competing at the highest levels?

A: It’s changed even since I wrote the book. Then I was just happy to have the game in my life. But now, we’re playing in the over-50 classification, and I would love to win a Canadian Senior Championship. I appreciate all the people I’ve met through curling. It’s been woven through the story of my life. But that win-at-all-costs attitude is, thankfully, no longer there. Still, when I step on the ice, something goes through my veins. It’s showtime. When you’ve spent over 40 years chasing something, it never leaves you.