As Canada declared a climate change emergency, Drake's private jet was burning the equivalent of 25,000 lbs of coal above Toronto. It gets worse. 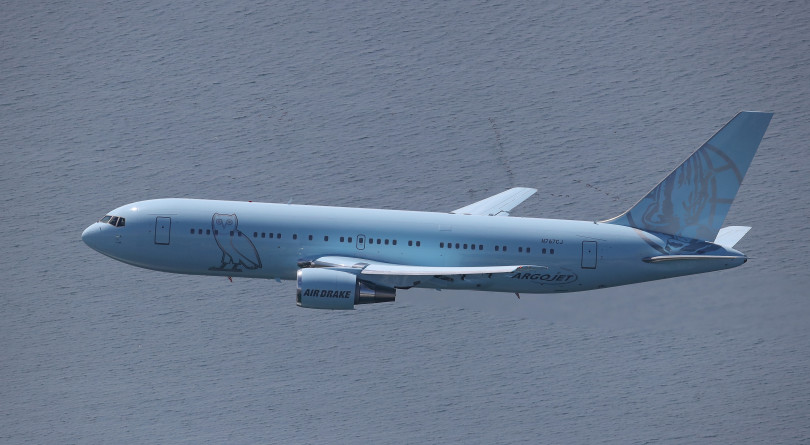 Drake's plane lands at the island airport as fans turn out for the Toronto Raptors NBA Championship Victory Parade on June 17, 2019, in Toronto (Tom Szczerbowski/NBAE/Getty Images)

On the day Toronto paraded through the streets to celebrate its first-ever NBA championship, there was, unbeknown to most spectators on the ground, a second celebration happening in the sky. Drake’s personal plane—nicknamed “Air Drake” and donning his record label’s owl logo—was doing a victory lap above the city. The Canadian rapper, meanwhile, was riding a double-decker bus with the players, taking in the atmosphere.

It’s hard to fault Drake’s unwavering enthusiasm for both the team and the city. But it turns out that his celebratory flyover did more harm than good—that is, for the environment.

Ryan Katz-Rosene, a professor at the University of Ottawa and the president of the Environmental Studies Association of Canada, decided to draw out Air Drake’s flight path using Google Earth, and ball-parked a distance of about 317 nautical miles (a unit of measurement used in both air and marine navigation). Then he determined how much fuel Air Drake burns. The aircraft—a Boeing 767-200ER—consumes about 48,570 kg of fuel flying from New York City to Los Angeles and back, which translates to 22.8 kg of fuel burned per nautical mile.

Then there’s the greenhouse gases (GHG) his plane emits. A report from the International Air Transport Association, a trading group comprised of the world’s airlines, suggests that the combustion of 1 kg of jet fuel in an aircraft engine produces an average of 3.15 kg of carbon dioxide (CO2)—which, in turn, contributes to the Earth’s warming and the ongoing climate crisis. 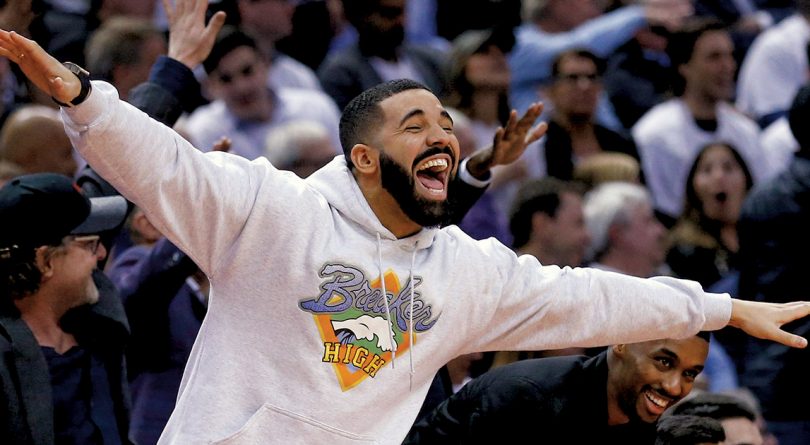 Drake gets in on the fun as the 4th quarter winds down. Toronto Raptors vs Philadelphia 76ers in1st half action of Round 2, Game 5 of NBA playoff play at Scotiabank Arena. Raptors win 125-89 and now lead series 3-2. (Rick Madonik/Toronto Star/Getty Images)

All this to say, when Katz-Rosene did the math, he concluded that Air Drake’s victory lap above Toronto—which occurred on the same day that Parliament declared a national climate change emergency—produced 22,766.9 kg of CO2, the equivalent of four homes’ electricity usage for a year, according to the EPA’s greenhouse gas equivalencies calculator.

To be clear, says Katz-Rosene, the “margin of error is fairly significant because there are so many factors at play” such as flight altitude, route, weather, time of day and the weight that was carried.

But it is most likely an underestimate, because there is more than just CO2 to consider. “One of the amazing things about aviation is that we now know that the climate footprint, in terms of climate change, is about double what the carbon dioxide footprint is,” he says. For example, the “radiative forcing” of aviation, Katz-Rosen explains—a measurement for how much solar energy stays in the Earth’s atmosphere—can impact the climate in a variety of ways, especially when you consider other emissions and contrails produced by planes. And when these are factored in, the toll of a flight on the Earth is “about twice as much as what it would be if you’re just looking at carbon dioxide.”

To make up for his carbon footprint, the EPA’s calculator suggests that Drake would have to plant 376 tree seedlings and make sure they survive for at least a decade, but Katz-Rosene suggests that donating up to 500 trees to Toronto might be a more fitting offset, just to be safe.

When reached by Maclean’s, Drake’s publicist, Melissa Nathan, said she had no comment to offer at this time. Both the Raptors and MLSE, the team’s parent company, also declined to comment. (Drake is the team’s global ambassador.)

Drake showed off his new plane to the world in May. And since then he’s been trotting the globe—touching down in places like Turks and Caicos, the Bahamas and Los Angeles. Maclean’s tracked Drake’s flights between May 11 and June 20 using the website FlightAware (excluding the trip from Las Vegas to Hamilton carrying the Raptors’ roster the day of their championship parade) and punched the numbers: Air Drake has left a footprint of roughly 894,316.29 kg of CO2.

Attributing all of this to Drake himself may be a little unfair. After all, travelling to perform in front of massive crowds is part of his job, usually with his entourage alongside him. But it’s also part of a larger societal problem. In June, Flightradar24 tracked as many as 217,326 flights in one day and the number of airline passengers globally has more than doubled since the beginning of the century. “Aviation does offer so many benefits—it brings people together and offers all kinds of economic benefits to our society,” Katz-Rosene says. “But unlike EVs [electric vehicles], green options for aviation are pretty limited. There are some, but it’s kind of a distant dream for now.”

There’s a policy dilemma underneath it all. Emissions from international flights out of the country are not part of Canada’s domestic climate plan, despite having grown by 85 per cent since 1990. But while airline emissions only represent about 2.5 per cent of the world’s total annual GHG emissions, the industry is rapidly growing. There have been some technological innovations, Katz-Rosene says, but “the problem is that the sector has grown so substantially that the net-growth in emissions have outdone the efficiency gains.”

For Katz-Rosene, Air Drake’s celebratory flight seemed to match the rapper’s loud persona. But he doesn’t hold it against him—he doubts Drake knew what kind of impact his aircraft’s emissions would have. He was simply flying high in the moment. “It’s just a symptom of our complete failure as a civilization to deal with aviation emissions,” Katz-Rosene says. But if the Grammy winner is open to the idea of donating the precise number of trees to the 6ix, he would be happy to crunch the numbers.