From 'Aboriginal' to 'Indigenous': Changing terms in the Trudeau era

Many terms have been used by the Canadian media to refer to the original inhabitants of Canada. The Trudeau era has seen rapid change. 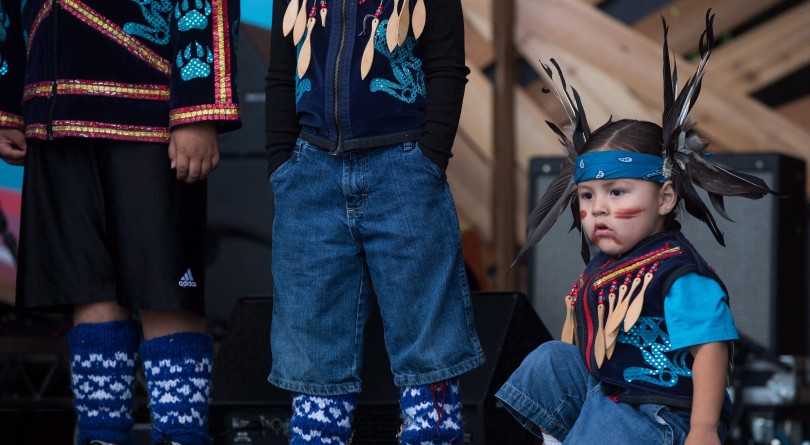 A young First Nations boy waits to dance after the Walk for Reconciliation in Vancouver, B.C., on Sunday September 24, 2017. The two kilometre walk was held to promote positive relations between Indigenous and non-Indigenous people in Canada. THE CANADIAN PRESS/Darryl Dyck

Mathieu Landriault is a political studies professor at the University of Ottawa.

Justice and reconciliation with Indigenous Peoples have been key priorities since Justin Trudeau was elected in October 2015.

Prime Minister Trudeau and key cabinet ministers have often expressed their desire to strike a renewed relationship with Indigenous Peoples, one in which the Indigenous will have a meaningful role to play in formulating and implementing policies that impact their communities.

The impact on public discourse has been significant, not to mention the effect on language. As an academic who researches media and public opinion on Arctic security, sovereignty and governance, I’ve observed a shift in the use of the terms “Aboriginal” and “Indigenous” in the mainstream news media. My preliminary research indicates that this change has been driven by the election of the Trudeau government.

What’s in a designation?

Many terms have been used by the Canadian media to refer to the original inhabitants of Canada: Indian, First Nations, Native, Aboriginal and Indigenous. But the term used in public discourse is important because it’s tied to identity and it matters whether this identity is provided by outside officials or by the group itself.

The term “Indian” might be the most obvious example of a name being thrust upon First Nations from those outside their communities. The term “Aboriginal” was also considered to be an external creation, and prompted the Association of Manitoba Chiefs and the Anishinabeks of Ontario to reject it in 2014.

However, “Aboriginal” carries legal ramifications as it is used in the 1982 Canadian Constitution in both Section 35 and the Charter of Rights and Freedoms, for example.

Recently, the term “Indigenous” has gained credence as a more appropriate terminology as it refers to rights laid out in the United Nations Declaration of the Rights of Indigenous Peoples. Both terms, Aboriginal and Indigenous, are tied to legal documents with important consequences in terms of consultation and rights, although Indigenous carries a more global undertone.

What about the terms preferred by the Canadian media?

From Aboriginal to Indigenous

Such question can only be answered by looking over long periods of time at different media outlets. My research suggests there is strong evidence that the Canadian media started to change their practice after the election of the Trudeau government.

As seen in the table below, the term “Aboriginal” was the dominant one used in televised reports and newspaper articles before October 2015; the situation evolved dramatically after October 2015. We can also conclude from the data below that Indigenous issues have gained more attention and reached an extended audience after the 2015 election. 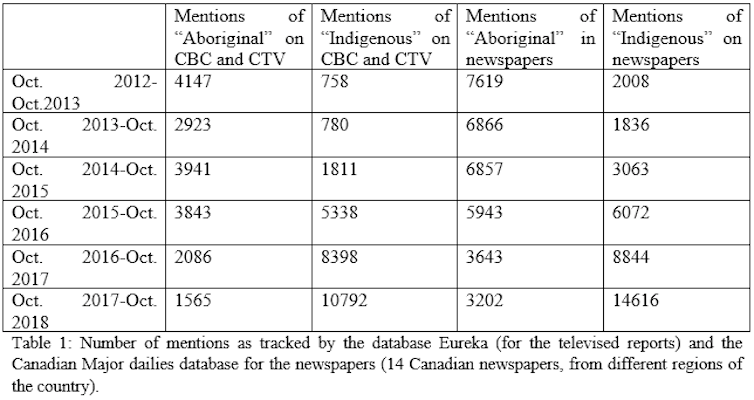 There are different ways to explain this evolution.

For one, maybe specific initiatives can account for the increased use of the designation “Indigenous.” For example, the mentions of the National Inquiry into Missing and Murdered Indigenous Women, Indigenous and Northern Affairs Canada or the United Nations Declaration of the Rights of Indigenous Peoples could have explained this change of language.

That would suggest the shift is more a consequence of specific institutions or documents than a change in journalistic practices.

But these three initiatives only account for under 10 per cent of the hits after October 2015.

Another explanation could be that left-leaning or more progressive media such as the CBC or the Toronto Star have led this evolution. However, Postmedia newspapers (including the National Post, Ottawa Citizen and Montreal Gazette, among others) also joined this movement in 2016-2017 by using Indigenous more frequently than Aboriginal.

The role of social media

Political leadership can create momentum on issues, in this case for an increased emphasis on Indigenous justice and reconciliation. In fact, the evolution in media practices followed another important phenomenon: the change of political messaging by the newly elected Trudeau government.

Elected representatives use Twitter as part of their daily political messaging strategy. Politicians, most of them Liberal or left-leaning, led the way in the year following Trudeau’s election by using the term “Indigenous” in their social media communications, as we see below: