From foster care to missing or murdered: Canada's other tragic pipeline 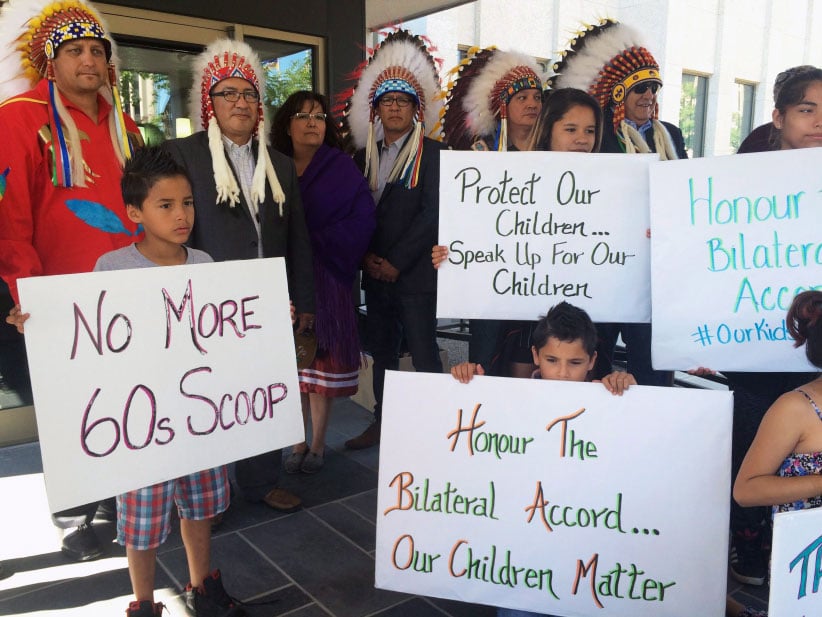 Prime Minister Justin Trudeau has been taking a great deal of heat over the Liberal government’s recent approvals of Kinder Morgan’s Trans Mountain pipeline and Enbridge’s Line 3 pipeline, while TransCanada continues to pursue the Keystone XL and Energy East projects. These decisions have inspired major media attention, political debates, litigation, and on-the-ground protests because of their inherent threats to the health and well-being of people, land, water, plants and animals. But there’s another pipeline that’s arguably more lethal than those that carry oil and gas, but gets far less attention from the media or politicians: the pipeline from Canada’s foster-care system to murdered, missing and exploited Indigenous women and girls.

The increasing number of First Nations children being placed into foster care in Canada is nothing short of a crisis. Although Indigenous children make up only seven per cent of the population in Canada, they represent 48 per cent of all children in foster care. It is an astounding number until one examines these rates on a province-by-province basis. In Alberta, Manitoba and Saskatchewan, Indigenous children represent a shocking 73 per cent, 85 per cent and 87 per cent of all children in care respectively, according to the most recent Statistics Canada report. However, Manitoba reports that their numbers of Indigenous children in care are increasing and currently stands at 90 per cent, which represents one of the highest rates in the world. This isn’t much of a surprise given that one newborn is taken away from his or her mother every day in Manitoba as a matter of course—the vast majority being Indigenous. They are not the only provinces implicated as Indigenous children in Ontario are 168 per cent more likely to be taken into care than white children.

What is surprising is that neither federal or provincial governments seems to have learned from their disastrous policies and practices of the past. The report from the Truth and Reconciliation Commission (TRC) detailed the many horrors faced by Indigenous children who were stolen from their families and forced into Indian residential schools where many were starved, beaten, raped, subjected to medical experimentation, and tortured; ultimately, more than 6,000 children died. As residential schools started to close, however, the federal government paved the way for child welfare agencies in the provinces to continue the assimilation project of separating Indigenous children from their families. The removal of 20,000 Indigenous children between the 1960s and 1980s—now referred to as the “’60s Scoop”—found those children taken out of their communities by the busloads and placed for adoption in non-Indigenous families in Canada, the U.S. and the U.K., often without parental consent. The ’60s Scoop became a market for the advertising, buying and selling of Indigenous children—an act that many of the victims consider to be human trafficking.

Canada has since apologized for the devastating impacts of residential schools on many successive generations of Indigenous families. In 2008, Prime Minister Stephen Harper said that “it was wrong to forcibly remove children from their homes and we apologize for having done this,” and acknowledged that the objectives of residential schools “were based on the assumption Aboriginal cultures and spiritual beliefs were inferior and unequal. Indeed, some sought, as it was infamously said, ‘to kill the Indian in the child.’ Today, we recognize that this policy of assimilation was wrong, has caused great harm, and has no place in our country.” More recently in 2015, former premier Greg Selinger offered an official apology on behalf of the province of Manitoba for the ’60s Scoop, admitting that the removal of Indigenous children from their families “was a practice that has left intergenerational scars and cultural loss.” But there are three times more Indigenous children in care today than there were during the height of residential schools. And most Indigenous children are taken into care for reasons of neglect and structural factors beyond the parents’ control, like conditions of poverty and poor housing, and less likely than non-Indigenous children to be taken into care for reasons of physical or sexual abuse. Apologies mean very little if the practice continues, and in the case of Indigenous children, the practice of separating Indigenous children from their families is getting much worse.

Residential schools, the ’60s Scoop and the current foster care crisis have and continue to result in the loss or severe diminishment of Indigenous cultures, languages, identities, family ties, and a sense of belonging.  The forced disconnection from one’s family, community and culture are considered to be root causes of depression and suicide amongst Indigenous peoples. However, the added suffering from mental, physical and sexual abuses resulting from these assimilatory policies and practices can also result in inter-generational trauma and post-traumatic stress disorders. Recent research also indicates that even children not directly impacted by these policies are at significant risk of depression and symptoms of trauma given their close contact with impacted parents. What awaits Indigenous children forced into the foster care pipeline can be just as horrific as the worst of residential schools.

Tina Fontaine is one of many examples of Indigenous girls from the child welfare system who become victims of sex violence and/or trafficking once they are separated from their families and communities and sent to live in hotels in urban cities. Tina ended up murdered despite being in contact with child welfare, medical personnel and police officers in the hours before her death—none of whom protected her and or returned her to safety. These girls are often unsupervised and easy prey to pimps and johns, and in some cases, even become victims of sexualized violence from government officials, including prison guards, police officers and judges. Recent evidence shows that half of the victims of human trafficking within Canada are Indigenous women and girls and many come from the child welfare system. The women and girls being trafficked in Canada are sold to doctors, lawyers, teachers, police officers, judges and soldiers—making this a societal problem and not one that can be blamed on the victims.

In the U.S., 60 per cent of child sex trafficking victims come from foster homes or group homes, and it is expected that the national inquiry will discover similar levels in Canada. The over-representation of Indigenous children in foster care has become a pipeline to suicide, prison, sexual exploitation, and those who are murdered or go missing. It makes no sense for federal or provincial governments to apologize for past policies and practices if they continue today at even higher rates. Dr. Cindy Blackstock, who heads the First Nations Child and Family Caring Society won a human rights claim against Canada at the Canadian Human Rights Tribunal (CHRT) which found the federal government discriminates against First Nations children in care through underfunding, simply because they are Indigenous. It is long past time that governments—independent of residential school settlements, ’60s Scoop litigation, or the national inquiry—set up a specific plan of action to end the overrepresentation of Indigenous children in foster care. The fact that Trudeau continues to ignore compliance orders issued by the CHRT to address the discriminatory underfunding should be viewed as a crime.

The lives of Indigenous children literally hang in the balance. They are the most vulnerable in Canadian society and they face significant risks in foster care. We owe them more than a future apology. They deserve our action and protection—right now.

Pamela Palmater is a Mi’kmaw citizen and member of Eel River Bar First Nation. She has been a practicing lawyer for 18 years and currently holds the Chair in Indigenous Governance at Ryerson University.