At 'Read by Queens,' kids take in storytime from drag queens in public libraries, part of a wider trend in exploring gender and individuality 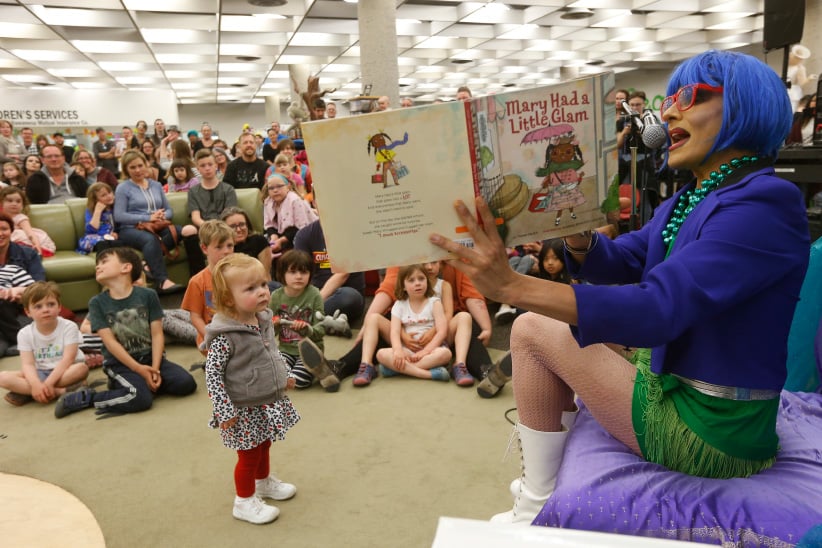 Pharaoh Moans reads to children and parents at the Millennium Library in Winnipeg Saturday, May 20, 2017. Winnipeg Public Library hosted Read by Queens, a family storytime event with stories read and performed by local drag queens on on May 20, 2017. (Photograph by John Woods)

While children and parents tiptoe with anticipation to the Ah kha koo gheesh area of Winnipeg’s Millennium Library—meaning Groundhog Place, in Anishinaabe—drag queens are putting their final touches on dramatic makeup and bright, punchy costumes. An audible buzz fills the air as the drag queens chat excitedly about the upcoming storytelling program: Read by Queens. This event, the first of two planned in Winnipeg Libraries in the month of May, marks the first time many of these drag queens will perform for such a young crowd.

“I’m a big kid myself. I still watch cartoons and everything,” says Picky, whose striped costume is punctuated by bright green pom pom breasts and black heeled boots. “It’s a whole new generation, and it’s showing them you can be anything that you want, and you can have fun with it.”

The brainchild of Corinne Mason and Margaret Bryans, local parents in the queer community, the event is a collaboration with the Winnipeg Public Library and the drag queens—some of whom are participants of the Like That program at Sunshine House, a drop-in and resource centre focusing on harm reduction, population health promotion, and social inclusion.

For Mason, this event is a rare opportunity for queer-focused family programming. “I spent maternity leave super frustrated and super bored. My family wasn’t represented, or I just didn’t feel like I belonged in a lot of spaces, or my family didn’t belong in a lot of spaces,” says Mason.

Bryans agrees, noting that for her six-year-old child, this is the first time there’s been an event outside of Pride that lets their family be seen.

“I have a kid that gets to choose her family. And she gets to have six-feet-tall glamazons looking fierce as hell at her back. And that is something that all kids deserve,” says Bryans.

It may be 2017, but this simple acceptance of a queer-centric children’s event in a public facility—without any opposition or protest—still feels notable. The popularity of the TV show RuPaul’s Drag Race, now in its ninth season, might reflect this growing mainstream acceptance of drag culture today, but it hasn’t always been the case.

Gender-bending in entertainment has existed in some form since Ancient Greek theatre, but anti-gay legal systems in the 1950s and 1960s pushed drag queens to few nightclubs that would accept them, including New York’s famed Stonewall Inn. The Stonewall riots in 1969 led primarily by trans women of colour are widely considered the birthplace of queer activism in the U.S.; famed activist and drag queen Marsha P. Johnson was one of the first to fight back against the police raids that persecuted queer and trans people.

While gender nonconforming folks still face social and legal persecution across the world, under the bright fluorescent lights of the library on a Saturday afternoon, a brighter story unfolds. 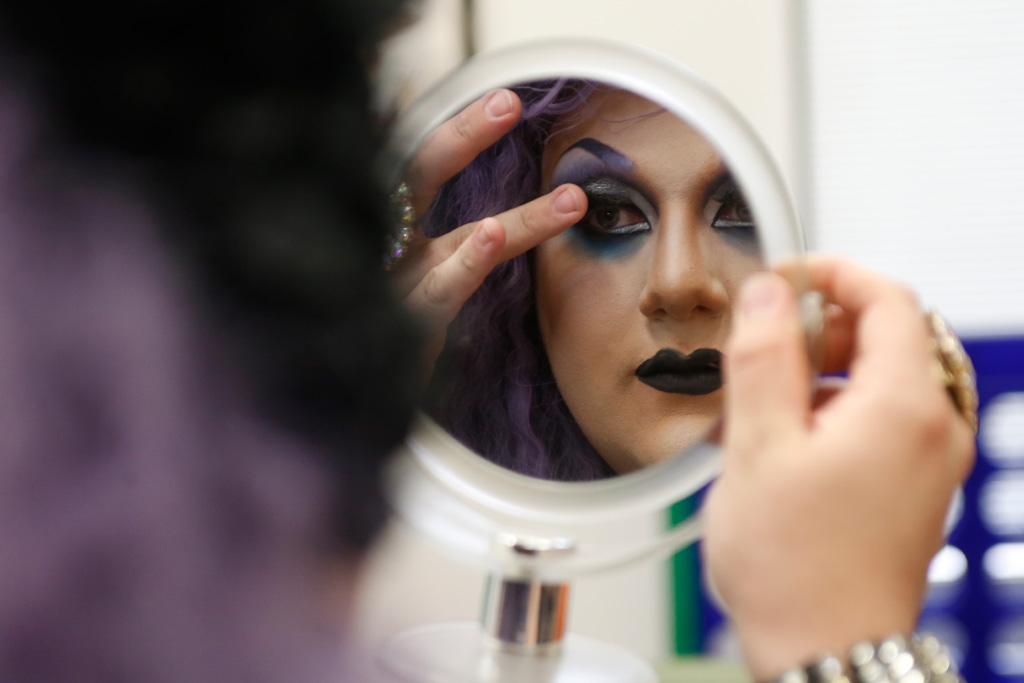 Cake gets ready to read to children and parents at the Millennium Library in Winnipeg Saturday, May 20, 2017. Winnipeg Public Library hosted Read by Queens, a family storytime event with stories read and performed by local drag queens on May 20, 2017.

Children and parents take their seats on colourful chairs and cushions, leaving few empty seats remaining, while back in the green room Prairie Sky (a.k.a Levi Foy, ‘Like That’ program coordinator at Sunshine House) is psyching up their fellow queens and going over the program.

When the audience catches their first glimpse of the drag queens filing onto the stage, infectious cheers and smiles erupt from little ones and parents alike.

The children are attentive listeners as the drag queens take turns sitting on a blue tulle-covered hot-seat, set in front of a backsplash of glittery silver fabric with pink, orange, and yellow stars. The stories chosen are a mixture of childhood classics and newer titles, but each drag queen playfully shares their connection with their chosen story. In The Very Hungry Caterpillar, for example, the caterpillar emerges out of a cocoon as a beautiful butterfly—a fitting metaphor for coming out as a dazzling drag queen.

The glam queens also find themselves in other stories, like Mary Had a Little Glam and The Paper Bag Princess.

“Little does she know that that paper bag is very fashion-forward,” says Cake, tossing her long lavender locks over her shoulder to get a better read of her book. The children’s giggles spread, as more and more kids move to sit on the floor directly in front of the drag queens for a better view of the action.

Lady Quinnzarr, decked out in green pants with a pattern resembling mermaid scales and red sequinned sky-high heels, performs a lip-sync rendition of The Little Mermaid’s “Part of Your World.” When she jumps up from the floor and onto the upholstered chair—still wearing high heels—a gasp, then laughter, erupts from the crowd as she sticks her landing like only a pro drag queen could.

Toddlers dance in the centre, free to be themselves, while other kids cuddle up on their parents’ laps, singing along to every word.

Satina and the event’s sole drag king, Ruddy, perform a rendition of “The Cat Came Back,” which rouses “meows” from the children, who aren’t shy to show off their dance skills. If it weren’t for the shelves of books surrounding the enclosure, one might forget the library setting. Positivity and freedom of expression are second nature to this audience.

Reflecting on the event afterwards, Prairie Sky said the opportunity to work with children was “extra important, because children should be exposed to various different types of life and expression and art.”

For parents, the event offered an opportunity to introduce an understanding of gender at an early age.

“We were explaining what drag queens were on the way in, so it gave her a chance to talk it out and think about it,” said Alex Krosney, who attended with her girlfriend and her girlfriend’s five-year-old daughter. “When she came in she was like, ‘Look at that boy dressed up.’ And so we said, ‘When they’re dressed up as girls, we’re going to talk about them like they’re girls, so we’re going to say “she.” ‘ And it took her a while to get that, but I think it was cool to have the chance to think about it in a different way.”

Joseph Moore, the school LGBT2SQ+ equity and inclusion coordinator at Winnipeg’s Rainbow Resource Centre, stresses the positive impact of introducing gender exploration to children, as children learn about themselves through play and creative self-expression.

“When their individuality is supported by their caregivers and those around them, there is an increase in their self-confidence,” says Moore. “As caregivers, we should strive for our children to feel acceptance and nurturance so that they can grow into confident individuals who have learned to show respect to others regardless of their identities.”

When storytime is ends, it’s clear that these kids don’t want their time with the drag queens to be over. “They were really colourful, and some of them were really pretty. I like them all,” says Marie, a 10-year-old in the audience. Amid a sea of little ones and glamazons, the crowd divides as some children eagerly wait in line to get a photo with their favourite drag queen or king, and others flood to the craft tables to create glitter beards, magic wands, and tiaras.

Despite the fact that some in the outside world will inevitably try to place these kids into strictly defined gender boxes as they age, for now, dress up and gender play is smile-inducing. After Read by Queens ended, one parent posted on the event’s Facebook page that their child had the time of her life, and went home and declared herself a drag queen.

And why not? Whether you’re five years old or forty, we could all use a little more glitter and sparkle.

Sam K. MacKinnon is a freelance writer based in Winnipeg.