'They wanted big and cheap,' shrugs Don Foulds of the Moose Jaw officials who commissioned his sculpture. 'Aesthetics is not the primary concern for a group like that' 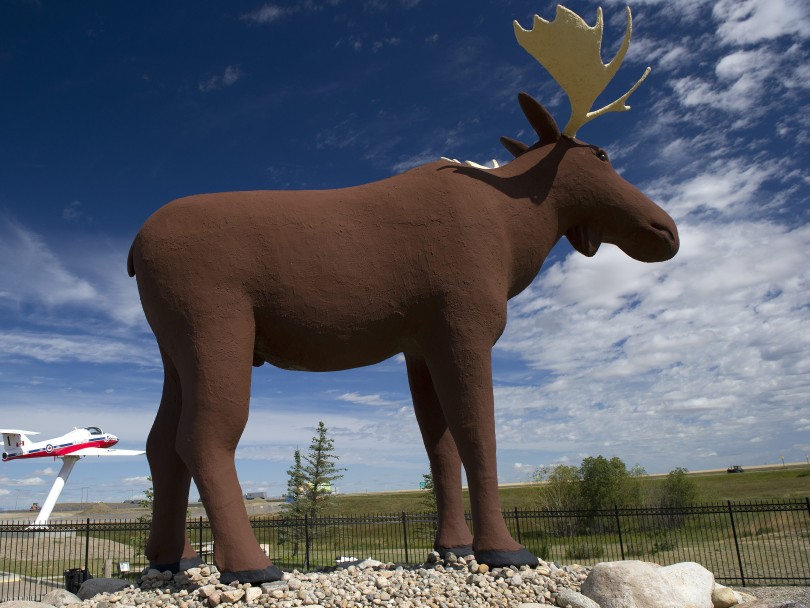 Mac the Moose on his pedestal outside Moose Jaw, Sask. (The Canadian Press Images/Larry MacDougal)

It was a moment of national deflation, when word got around that Norway had unveiled the world’s largest moose—thus unseating Moose Jaw’s Mac the Moose of its coveted title. Over the past week, comedians and news outlets around the world have noted the rivalry between Canada and Norway with our poor, dejected, Mac often bearing the brunt of cruel comparisons. Maclean’s Jen Gerson spoke with Mac’s creator, Don Foulds, now retired. Foulds created Mac in 1985 and spoke amid the recent controversy from Costa Rica.

Q. Tell me about your history with Mac the Moose. How did you come to create the world’s second-largest moose.

A. I was working full time as a sculptor doing my own work but in the summers I would take on projects. Projects of any sort, make some money. I made a number of roadside kind of things. A Turtle for Turtleford. An Indian Head for Indian Head in Saskatchewan. Deer for Tantallon. Moose Jaw people heard about me, I guess, called me up and asked about doing a moose.

Q. I get the sense that you weren’t super passionate about these projects. They were more money-making proposals.

A. Oh I don’t think I would have made Mac the Moose on my own, no.

Q. When they came to you what did they say?

A. Essentially those things are done in a committee format and so someone contacted me then a gang of them came out to where I was working just outside Saskatoon. It was the mayor and a couple of council members and they had no aesthetic concerns whatsoever. They wanted big and cheap.

Q. Oh no. As an artist that must just break your heart.

A. Not really. The reality about those kinds of community projects is that they are not about about the artistic side. As an artist I get to do 99 per cent of the time on my own work, doing my own thing. When I feel strongly that involvement in your own community or communities is an important thing for artists to do.

Q. But was there a lot of civic pride tied up in the fact that it had to be the biggest moose?

A. Early on in the day when we were talking I laid out a base and price and they just kept on wanting to keep the price the same but then make [the moose] bigger and bigger and bigger. My inclination was strongly keep it a reasonable size and go after quality. Given the amount of money I can actually do a good job with. The committee, I feel, was very clear that what they wanted was something that had a certain spectacle aspect to it, and the size was definitely the key to all of that.

Q. Do you feel that the quality or artistic vision got compromised in that conversation?

A. I am quite happy saying that aesthetics is not the primary concern for a group like that. They didn’t come to me to get the world’s best figurative animal sculpture. If they had, they would have received something very very different. They came looking for a roadside attraction.

Q. So how did you go about constructing this moose?

A. I started on it and then immediately started getting phone calls. Like any committee-driven project, everybody thought they were in charge, and so when I first started it was actually kind of funny because I went out to my studio, I would do a drawing on the floor in chalk. Before I could even get that done, I got a phone call asking if I could make it bigger. I said, it’s not a big deal but understand the price was set at $12,000 and for that amount of money you’re only going to get so much. There’s only so many materials and so much time going in. That’s the way it is.

Q. I’m not familiar with sculpture, how exactly did you make it?

A. You arrive at rough dimensions, then I welded an armature in steel, a bit like a skeleton. Then you’ve got to start figuring out a pose or a posture for it that isn’t too dreadful. For a huge thing like this, there are no options; you need to have four feet on the ground for fear that the thing would topple. It is so big that the danger involved in having a thing that big is too great, you just can’t do it so that it’s graceful and tippable.

Q. It sounds like this moose could survive a bomb.

A. My primary intent, other than the community issues, was not to kill people.

Q. So it’s made out of steel tubes, concrete and paint on top of it?

A. So no, now you have it in steel pipes so it’s solid. Then you put wire mesh over it, expanded metal mesh that is for concrete work that is three dimensional. Now you can get some of the details like the face and eyes. Then over top of that, you start coating it with concrete. You do a final coat of light cement with coloured pigment on it. There was never any paint, though I see now from the video that was online just now that they have painted it.

Q. With the pigmented concrete, it wouldn’t chip.

A. That’s it. When you put the pigment into the concrete, it’s there forever. Moose Jaw over the years has asked me if I can fix cracks and fissures and I have essentially said that anybody who has good masonry skills now could step in and fix the thing up. The pigment that was used was a standard one that you’ll see around basements. You could buy it anywhere.

Q. You were very pragmatic about your approach to this. You made it really easy to maintain.

A. Exactly, because there will be maintenance. Over the years, people have done all kinds of things to it. People hit it [with vehicles] and—I’m not sure if it’s true—but I think somebody shot it.

Q. How do you feel about the Norway sculpture? Are you in love with it?

A. No not in love with it but I admire that it is highly crafted. That sculpture is worth hundreds and hundreds of thousands of dollars. In Norway there is a lot of public funding for sculpture. Much much more than in Canada. They have a real respect for artists and public artists. We could learn from that. 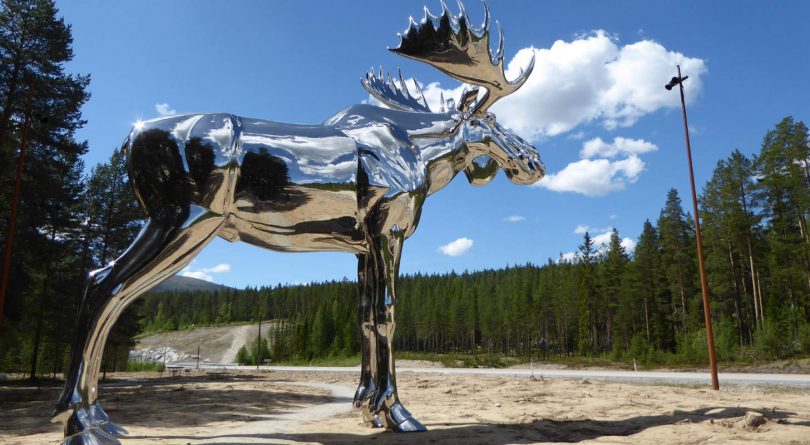 The moose at Storelgen, Norway (VisitNorway.com)

Q. Do you think it’s a bit ironic given what you went through to build this moose that Norway built a bigger one?

A. Not ironic, I think it’s actually exactly the kind of thing that the politicians like the mayors love. I can’t imagine that Moose Jaw isn’t just revelling in all the publicity that it’s getting. From their perspective that is complete success for their sculpture.

Q. Comedian Stephen Colbert made some pretty nasty comments about the Moose Jaw moose. He said: “Norway has the T-1000 Terminator moose. Canada has a papier-maché dog from an abandoned theme park.” I thought that was pretty harsh.

A. Well no, that’s what humour should do. That he is saying that kind of stuff is just great. If he said that kind of stuff about the things that I made that I am personally engaged with and committed to, it would be another thing. As for the moose in Moose Jaw I actually think it’s kind of true, but it’s also a comment on how funding comes about in Canada.

Q. Is there any part of you that has an affection for this moose?

A. Oh sure, with all of the roadside attractions that happen, the big-for-big’s-sake, there is a sort of humanity to them that is very appealing to me. As a working artist, I spent a huge amount of time in my studio, on my own, just working away. Public things, where I have to deal with people like the mayors, is a radically different experience, but one I feel comfortable with. That’s good. It’s good to be part of the community.

-Moose Jaw is now working on ways to enlarge Mac. Norway is also reportedly looking into creating another, even larger moose stature. This interview has been edited for length and clarity.