Quality wigs are in high demand—and prone to theft

Eva & Co. Wigs, a Vancouver specialty wig store, has experienced three break-ins over four years. Its human-hair wigs sell for between $2,500 and $3,500 each. 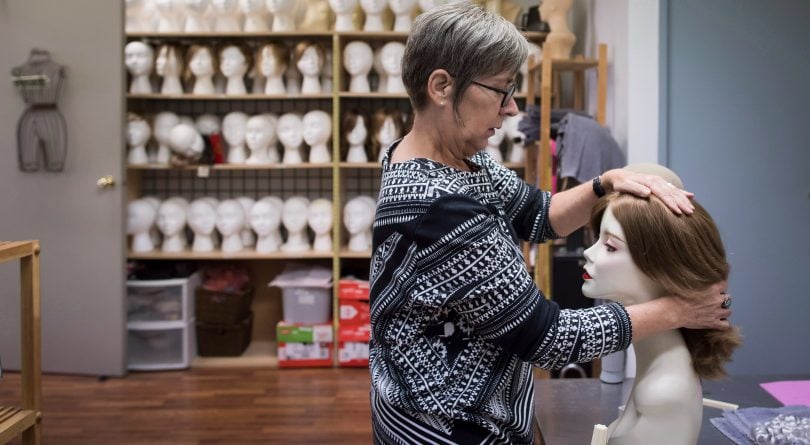 Frances Rae, manager of Eva and Company Wigs, works at the store where a collection of wigs worth more than $350,000 that were intended for cancer patients at B.C. Childrens' Hospital were stolen, in Vancouver, on Wednesday September 12, 2018. (Darryl Dyck/CP)

Sometime after 3 a.m. on Sept. 7, a thief crawled through the back of a closet in a specialty wig store on West Broadway in Vancouver, having smashed a hole through the wall of a neighbouring tea shop with a crowbar. Knocking over some paint cans in the process, the thief emerged into the store’s back room and began stufﬁng over $350,000 worth of wigs into a garbage bag taken from under one of the cupboards. Before the thief escaped through the parking garage, one of the wigs’ tags—labelled “six-year-old”—fluttered to the floor. It was picked up later that morning by Eva & Co. Wigs’ store co-owner, Cindy Yip, as she surveyed the scene alongside members of the Vancouver police. “It was worse than I expected,” recalls Yip. “They took pretty much everything, and in particular a lot of the kids’ wigs.” Of the 150 stolen, 15 wigs were destined for B.C. Children’s Hospital as part of a non-proﬁt organization that supplies free wigs to children with hair loss.

A week later, 66 of the wigs were recovered in a Downtown Eastside hotel; a resident in the building called police after she saw a bag full of hair in the hallway and connected it to the heist on the news. The wigs, however, were no longer usable. “They were sitting in a garbage bag for two weeks,” says Yip. “It’s not something I would ever want to put on anyone’s head.”

The heist was the store’s third break-in over the past four years. Established in 1971 by Yip’s mother-in-law, Eva & Co. provides natural-looking wigs to a wide variety of clients, from movie stars like Lindsay Lohan and Tyra Banks to people going through chemotherapy or suffering from alopecia. And while a wig store may seem an unlikely target for theft, high-quality human-hair wigs like the ones Eva & Co. makes in-house sell for $2,500 each, or up to $3,500 for custom orders.

“The ﬁrst question they ask is, ‘Will it look natural?’ ” Yip says of her customers, particularly those suffering from medically related hair loss. “They’re already going through so much. They don’t want anything more to be different.” The process of making a wig that doesn’t look like a wig is tedious, not to mention expensive. “Virgin,” or untreated, human hair is sourced from Europe and added to the cap by a method called hand-tying, or venting, in which one strand is afﬁxed at a time using a tool similar to a crochet needle. “You take the one hair, you put it through the hook, you put the hook through the wig cap, you pull it back, you tie it in a knot, you get another hair,” explains store manager Frances Rae. A vented wig can take as long as 60 hours to create, and that’s for an experienced wig-maker like employee Suzanna Fung. Now 65, she began working as a wig-maker in Hong Kong at the age of 12.

The process may seem arduous, but it’s why the store’s wigs are sought-after by ﬁlm stars and patients—and apparently thieves. “Even oncologists will say, ‘Oh my gosh, you haven’t lost your hair yet?’ ” Yip says of the wigs. “That’s how natural they look.”

But quality takes time, and with so many orders coming in at once, customers can typically expect a three-month wait for custom wigs. Yip and her co-workers had just ﬁnished a batch of custom orders when the theft occurred. Instead of calling to tell clients that their wigs were ﬁnally ready to be picked up, they had to break the news that their long-awaited wigs had been stolen.

Then, exactly four months after the robbery took place, police told Yip they had arrested a suspect they believed responsible for the heist: 52-year-old Martin Weigelt. “Getting to the charge approval stage took a lot of work by our detectives, but we’re quite happy with the arrest that we’ve made,” says Sgt. Jason Robillard.

With 84 wigs unaccounted for, the investigation into the break-in at Eva & Co. remains open. One resident of the hotel where the wigs were found told Maclean’s he’d seen sex workers who reside there wearing them, but he had not reported the information to police. While most of Yip’s clients want hair to maintain their identity, many sex workers use it to hide their own.

Regardless of where the wigs ended up, the damage had already been done. “People were so deflated,” says Rae. “When I called customers to tell them their wigs were gone, a couple of them just burst into tears.”