Aimed at making up for Harper's 2008 omission, the PM delivered a tearful apology: 'Saying that we are sorry today is not enough' 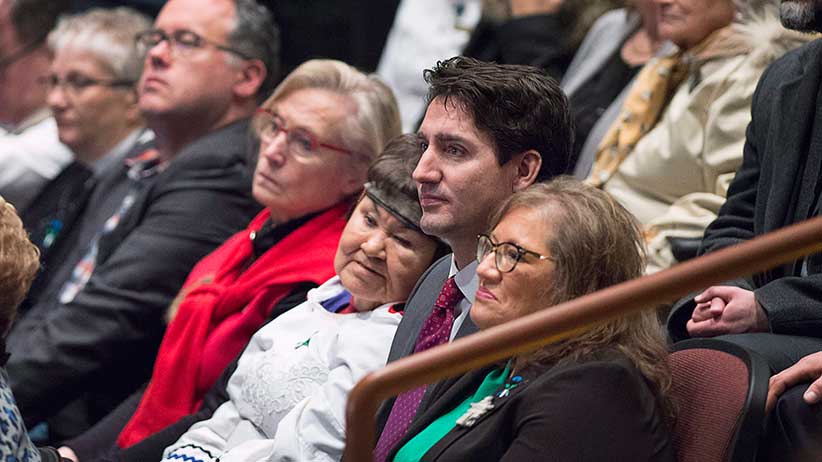 Prime Minister Justin Trudeau sits in the crowd before he delivered an apology on behalf of the Government of Canada to former students of the Newfoundland and Labrador Residential Schools in Happy Valley-Goose Bay, Nfld., on Friday, Nov. 24, 2017. THE CANADIAN PRESS/Andrew Vaughan

Stephen Harper’s 2008 apology to residential school survivors was considered a historic, if largely symbolic, step towards reconciliation with Canada’s First Peoples. In making the gesture, however, Harper failed to acknowledge the Innu, Inuit and NunatuKavut people of Newfoundland and Labrador. Why? Because residential schools in the province were set up before Newfoundland and Labrador joined Confederation. The five residential schools that operated in the province—the last closing in 1980—weren’t federally run, and so the Harper government evidently felt no need to recognize the thousands of survivors who attended them, nor their families or communities.

The decision was seen as a particularly glaring flaw of the apology—one that translated as a distinct lack of sincerity and empathy for Canada’s Indigenous people. A class-action lawsuit ensued and, last year, the Liberal government agreed to distribute $50 million to Indigenous survivors who were left out of the original apology and settlement.

On Friday, Prime Minister Justin Trudeau moved further to make up for the previous government’s omission with a tearful apology delivered to hundreds of former students and their families in Goose Bay. “Saying that we are sorry today is not enough. It will not undo the harm that was done to you. It will not bring back the languages and traditions you lost. It will not take away the isolation and vulnerability you felt when you separated from your families, communities and cultures,” the Prime Minister said. “We share this burden with you by fully accepting our responsibilities—and our failings—as a government and as a country.”

The full transcript can be read below.

At the turn of the twentieth century, the Moravian Mission and the International Grenfell Association established schools with dormitory residences for Indigenous children with the support of the province of Newfoundland and Labrador. Their stated purpose was to educate Innu, Inuit, and NunatuKavut children from the communities of Black Tickle, Cartwright, Davis Inlet, Goose Bay, Hebron, Hopedale, Makkovik, Nain, Northwest River, Nutak, Postville, Rigolet, Sheshatshiu and other parts of Newfoundland and Labrador. We now know, however, that Indigenous children in these schools were isolated from their communities, families, traditions and cultures. These residential schools were operated from 1949 until the last school closed in 1980, with the support of the Canadian government.

To move forward with reconciliation, we must understand the role of residential schools in our history. We must recognize the colonial way of thinking that fueled these practices. It’s important because it was there, in these residential schools, that many former students were sorely neglected, while others were subjected to tragic physical and sexual abuse. Many experienced a profound void at the loss of their languages and cultural practices, while others were not properly fed, clothed or housed. Ultimately, every single child was deprived of the love and care of their parents, families and communities.

Children who returned from traumatic experiences in these schools looked to their families and communities for support but, in many cases, found that their own practices, cultures and traditions had been eroded by colonialism. It was in this climate that some experienced individual and family dysfunction, leaving a legacy that took many forms. Afterwards, some experienced grief, poverty, family violence, substance abuse, family and community breakdown, and mental and physical health issues. Unfortunately, many of these intergenerational effects of colonialism on Indigenous people continue today.

On September 28, 2016, the Supreme Court of Newfoundland and Labrador approved the negotiated settlement agreed to by the parties to provide compensation to those who attended the residential schools in Newfoundland and Labrador and those who may have suffered abuse. The agreement also includes provisions for healing and commemoration activities identified by former students. This settlement was made possible because of the exceptional courage and strength of representative plaintiffs and other former students who came forward and spoke about their experiences. Sadly, not all are here with us today, having passed away without being able to hear this apology. We honour their spirits – and we cherish their memories.

We heard you when you said that the exclusion of Newfoundland and Labrador from Canada’s 2008 Apology to Former Students of Indian Residential Schools and the absence of an apology recognizing your experiences have impeded healing and reconciliation. We acknowledge the hurt and pain this has caused you – and we assure former students that you have not been forgotten.

Today, I stand humbly before you, as Prime Minister of Canada, to offer a long overdue apology to former students of the five residential schools in Newfoundland and Labrador on behalf of the Government of Canada and all Canadians. I also offer an apology to the families, loved ones and communities impacted by these schools for the painful and sometimes tragic legacy these schools left behind.

For all of you – we are sincerely sorry – pijâgingilagut – apu ushtutatat.

To the survivors who experienced the indignity of this abuse, neglect, hardship and discrimination by the individuals, institutions and system entrusted with your care, we are truly sorry for what you have endured.

We are sorry for the lack of understanding of Indigenous societies and cultures that led to Indigenous children being sent away from their homes, families and communities and placed into residential schools. We are sorry for the misguided belief that Indigenous children could only be properly provided for, cared for, or educated if they were separated from the influence of their families, traditions and cultures. This is a shameful part of Canada’s history – stemming from a legacy of colonialism, when Indigenous people were treated with a profound lack of equality and respect – a time in our country when we undervalued Indigenous cultures and traditions and it was wrongly believed Indigenous languages, spiritual beliefs and ways of life were inferior and irrelevant.

Saying that we are sorry today is not enough. It will not undo the harm that was done to you. It will not bring back the languages and traditions you lost. It will not take away the isolation and vulnerability you felt when separated from your families, communities and cultures. And it will not repair the hardships you endured in the years that followed as you struggled to recover from what you experienced in the schools and move forward with your lives.

But today we want to tell you that what happened in those five schools – at the Lockwood School in Cartwright, the Makkovik Boarding School, the Nain Boarding School, the St. Anthony Orphanage and Boarding School and the Yale School in Northwest River – is not a burden you have to carry alone anymore. It is my hope that today you can begin to heal – that you can finally put your inner child to rest. We share this burden with you by fully accepting our responsibilities – and our failings – as a government and as a country.

And this year, as we reflect on 150 years of Confederation across Canada, we have an opportunity to pause – to think about the future we want to create, that we must create, that we will create, together, in the coming decades and centuries.

We have an opportunity to rebuild our relationship, based on the recognition of your rights, respect, cooperation, partnership and trust. The Newfoundland and Labrador residential schools settlement is an example of reconciliation in action, a settlement with healing and commemoration at its core.

We understand that reconciliation between the Government of Canada and Indigenous peoples can be a difficult process and is ongoing – and we know it doesn’t happen overnight. But it is my hope that in apologizing today, acknowledging the past and asking for your forgiveness, that as a country, we will continue to advance the journey of reconciliation and healing together.

Former students, families and communities that were impacted by the Newfoundland and Labrador residential schools continue to display incredible strength in the face of adversity. Your resilience and your perseverance are evident through your actions every day. By telling the story of Newfoundland and Labrador residential schools, we ensure that this history will never be forgotten. All Canadians have much to learn from this story and we hope to hear you tell your stories – in your own way and in your own words – as this healing and commemoration process unfolds.

While we cannot forget the history that created these residential schools, we must not allow it to define the future. We call on all Canadians to take part in the next chapter – a time when Indigenous and non-Indigenous people build the future we want together.”

On behalf of the Government of Canada
The Right Honourable Justin Trudeau,
Prime Minister of Canada