Last Saturday, Pride Steinbach organizer Michelle McHale took to the public address system to announce that the morning’s march was delayed. So many were flocking to support the town’s controversial, inaugural Pride march that traffic had backed up 20 km down Highway 12, stranding cars all the way to Ste. Anne, Man. On hearing this, many in the crowd quietly wept. “It’s so overwhelming,” Brenda Schade, who is gay, said, tears running down her face. “I’ve never felt anything like this before.”

In the end, as many as 5,000 flooded the community of 13,000 for Steinbach’s first Pride march on July 9—surely the biggest Pride event small-town Canada has ever seen.

They came from Vancouver, Toronto and Orlando, Fla., after Steinbach’s mayor, its Conservative MLA, its Conservative MP and its city council—barring one councillor—announced they would not attend. “I have made my position public on my values of faith, family and community,” said Provencher MP Ted Falk, in refusing to attend.

There have been repeated flare-ups over gay-rights issues in Steinbach over the past three years, with each controversy triggering a new backlash aimed at the local LGBT community. But in a series of speeches on Saturday, the message was redemptive: “The love and understanding we seek will take time,” said Chris Plett. “But with patience, love, and forgiveness, things will come together.”

“I’m proud of the city today,” said local Rick Toews, who watched the march with his family. “We’re turning a corner.”

MORE: Inside the fight for LGBT rights in the giving community of Steinbach

By Pride standards, this was a stunningly tame affair, befitting the conservative, Mennonite community. There was no music, no beads, no bubbles, no booze.

Many signs integrated gentle Mennonite humour, as well as the Low German still spoken in the area. “Oma says: Yay gay!” one read. “It doesn’t matter who you metaschlope with,” read another. And “We want: borscht, zweibach, perogies, somma, equality.”

Nor was there a hint of hostility in the air. Indeed, none of the protesters who had threatened disruption showed up. 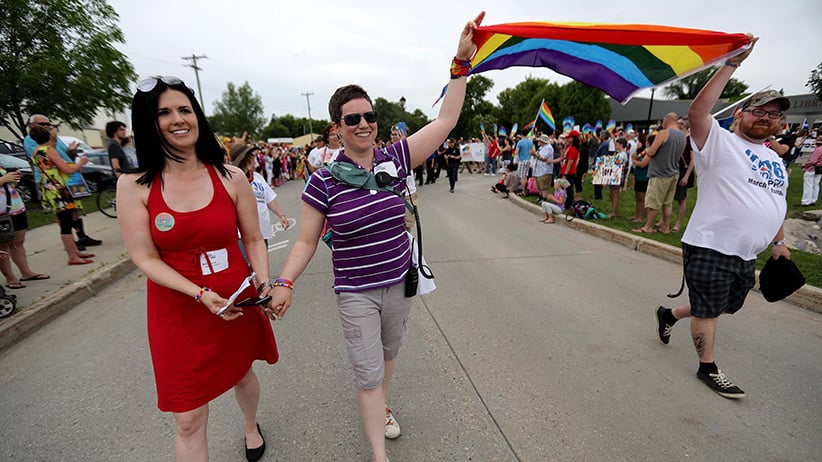 Still, the silence from Steinbach’s elite was deafening. The speeches were held on the steps of City Hall, which issued a statement: “Council has not officially endorsed the July 9 Pride March. Steinbach residents will decide for themselves whether they wish to attend this event.” The route wound past some of the community’s biggest businesses, all of whom had refused to support the parade, including the Steinbach Credit Union and the major auto dealers, who’d made a name for the city by luring Winnipeggers with deep discounts and the famed slogan, “Steinbach—it’s worth the trip!”

Steinbach Councillor Cari Penner was the lone local politician who attended. “We all struggle, and we are supposed to be together as brothers and sisters,” says Penner, who did a lot of soul-searching and deep reading after someone close to her came out. She came out of it believing God’s message is that people must love and support one another.

Pride is always a merry, raucous affair. But veterans of some of the world’s biggest Pride parades, including Toronto’s, Vancouver’s and New York’s, who were there in Steinbach agreed: this was the most genuine, emotional, cathartic and necessary Pride any had attended.

Maclean’s spoke with several young Steinbachers, who recalled being overwhelmed by often relentless bullying, shunning, angry stares and ugly messages. Each recalled how close they came to ending their lives, but they also spoke about how their lives had been transformed since coming out.

I lived a life in hiding, in fear and in shame. Growing up, I used to go out and disappear into the bush and cry, alone. I believed I was a bad person. I believed I had a dirty secret I couldn’t tell people. High school was a long path of verbal, emotional, and physical abuse.

One day, I walked into an outbuilding on the farm, I took a 22-calibre rifle, filled it up, put the gun in my mouth, put my finger on the trigger and started to squeeze. As I did, my best friend—who just happens to be my dog—came and scratched on the door. I recognized there was a bigger plan for me. That was also the moment I knew I had to find help.

My message to rural, LGBT youth is: don’t give up on your community. I thought I had given up on my community—then I saw a couple thousand people walking down the street behind me carrying Pride flags. I realized: my community is behind me. It just takes time.

We organized Pride Steinbach to counter the backlash. We wanted to make sure the [LGBT] community in Steinbach knew they were supported.

My message to politicians who turned their backs on us is this: it is not acceptable for an elected official to cite personal views as a reason to completely avoid a certain group of people. It’s not acceptable to pick and choose which constituents are going to be supported. That language is damaging. It allows people to justify their behaviour when they see leaders acting this way.

How did I get to 30 without realizing I was a lesbian? Growing up in a community where you don’t see yourself in anyone else is a lonelier journey, and it becomes harder to figure out.

To me, Steinbach Pride is about acceptance and love. It’s about emancipation. It’s about letting leaders know it’s us you answer to.

My message to others who are still struggling is this: if you risk this, you’ll be rewarded. This huge weight gets lifted off your shoulders. I never thought that could be true. They don’t live here, I thought before coming out. They don’t know what this is like. But believe it—it is true.

The message I heard from the church was that this was the worst thing a person could be. Hearing that felt incredibly lonely. There was no one to turn to. I couldn’t tell a soul.

I thought if I prayed harder it would go away. Many nights I would lay in my bed and cry. Please God, I used to pray: just don’t let me wake up in the morning. I wouldn’t ever have to come out, or tell anyone. My family would never have to know. Me dying would be better than having to tell them. It felt that terrible.

I was very scared to come out to my family, but it has absolutely made us a better family—a more empathetic family. My parents have completely embraced me.

My message to gay rural youth is: it gets so much better. You realize there is a huge community who will love and support you for who you are. You are not alone. We are doctors. We are teachers. We are lawyers. And we are here to support you, and to be with you.

I struggled internally all through high school—a lot of self-harm, suicidal thoughts, anxiety. I definitely felt ashamed for being gay. I thought it was terrible. Wrong. That it wasn’t God’s plan.

I didn’t choose to be gay any more than anyone else chose to be straight. Now I think it’s a bit of a blessing—because I can help people.

To me, Steinbach Pride means being able to be who I am in a town where that wasn’t always the case. It sends a message to those who aren’t out yet that there are people just like them in Steinbach, and in other rural communities.

Hiding and keeping everything a secret makes life a lot harder. It weighs on you, and any problem will just get worse. Today, I have friends and family—and now random strangers—who are supportive.

But I also want rural youth to know that not coming out is a brave thing too. You have to take care of yourself first, even if that means staying in the closet a little while longer until you can leave to go to Winnipeg.

I don’t think life gets better, or easier. But people do get stronger.

So many people are afraid to admit they are part of the LGBT community. That’s because there is still many people who don’t agree with it. So instead of being shunned, they put a mask on. They hide who they are.

I know this because I lived that life. I lived a lie, afraid of losing the ones close to me.

I was very unhappy with my life before coming out. I came very close to ending my life, and was hospitalized after an attempt last year.

I came out the summer of Grade 11. School was very difficult that fall. I was followed around, called names. Many of my teachers refused to use male pronouns, or my chosen name. I started having panic attacks when it came time for school in the morning.

I used to stop drinking every morning, at 7:30. I never used the school washroom.

Within a month, I dropped out.

Today, I am engaged, living with my fiancée, a published author, but most of all happy. I understand that I am lucky.

Many others in this community don’t have any support. They face the daily hate, the harassment, slurs just like me. But the difference is they do it all alone.

Being LGBT doesn’t make you weird. You are the way you are for a reason.

To everyone who lost their lives because they were LGBT and acceptance was missing from their lives, I wish you could have seen the change happening. It’s absolutely beautiful.