Pity Canadian journalism, Andray Domise writes, at a time 'where the limits to its overwhelming whiteness are coming into sharp focus' 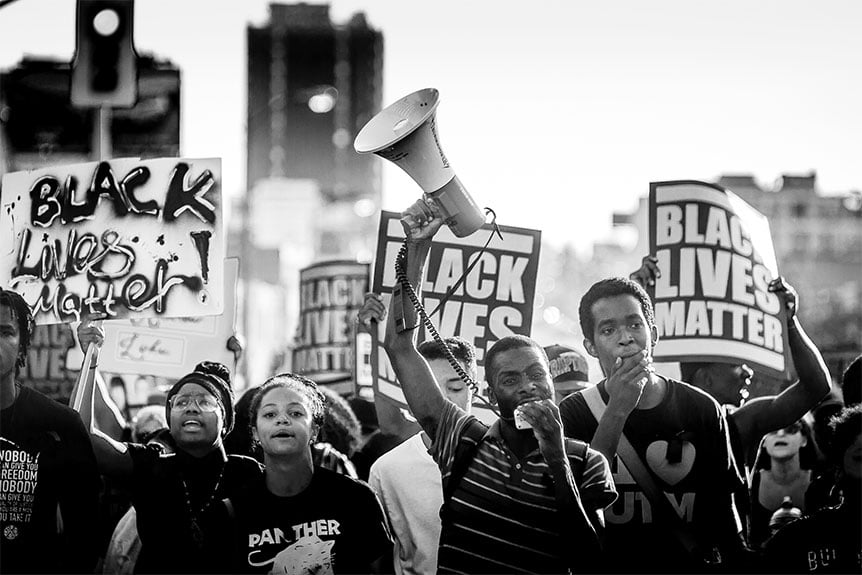 Desmond Cole at the BLMTO action that closed down the Allen Road in response to the murders of Jermaine Carby and Andrew Loku. (Jalani Morgan)

A year or so ago, Desmond Cole—journalist, activist, and friend—chatted with me about a meeting he’d had with John Honderich, at that time the publisher of the Toronto Star. Cole told me that Honderich had come to him with concerns, namely that Cole’s writing niche—namely race, racism, and policing—could possibly limit him. Desmond was deeply upset by the conversation, and the best I could manage was a derisive laugh. After all, Desmond had become a widely known name in journalism not only because of his deeply thoughtful and heart-wrenching writing on racialized matters, but also his strident and uncompromising activism in service of the marginalized.

The Star knew exactly who they were bringing in when they asked him to write for them. And, as many in the Black community knew they would, the Star made the mistake of believing Desmond Cole’s activism should (or even could) be reined in. The rules regarding a balance between journalism and activism don’t seem to have applied to other activists whose bylines have regularly appeared in the Star. So I have to say it: What I’m left with is the impression that the Star believed Desmond Cole to be their negro.

Last week, Desmond announced on his blog that he will no longer be writing columns for the Star. Before I get to the reason why, I’d like to point something out. Last year, I spent considerable time scouring daily publications in Canada for the presence of Black opinion columnists. As far as I can tell, Desmond’s was one of only three columns written by a Black journalist at any major daily print publication. The others are written by Royson James (a city writer for the Star), and Vicky Mochama (a race, gender, and politics writer for TorStar-owned Metro News). I’ll put it this way: if a plane carrying the three of them were to crash into the Atlantic, that could represent a 100 per cent loss of Black newspaper columnists for the large dailies.

Desmond resigned his position after he was called into a meeting with the Star’s opinion editor Andrew Phillips. By Desmond’s account, the concern Phillips expressed (and by extension, the Star’s concern as well) is that the type of activism he was engaging in was violating company policies. Rather than reporting on the story, he’d made himself the story. The week prior, Desmond disrupted a Toronto Police Services Board meeting by staging a lone protest until the board agreed to destroy data collected through carding. That data, obtained by police officers who arbitrarily stopped and questioned people who weren’t suspected of any crime, was found to have been disseminated upwards to government agencies and the RCMP. The effects of these fishing expeditions are known and carry real consequences for people of colour who have committed no crimes.

MORE: How activism has evolved for Black Canadians

Despite widespread community pleas for police to destroy information they had no business collecting, Toronto police chief Mark Saunders has proven intractable on the issue. The Toronto Police Services Board, which ostensibly operates in the interests of the public, offered no resistance. Board chair Andy Pringle has refused to engage Saunders on the matter of carding data, as has Mayor John Tory, who made room for his seat on the board by booting Michael Thompson (the board’s only Black representative from City Council and a staunch anti-carding voice). And thus, rather than let the Board dispense with the business of criminalizing people who gave up their information to the men holding badges and guns, Desmond refused to budge from his deputation seat until the Board changed its mind. The Board instead chose to adjourn, and Desmond became the subject of another news story. 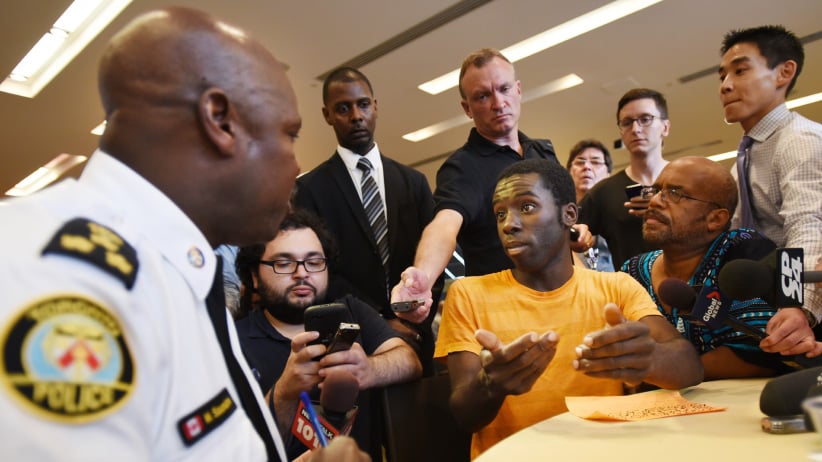 After Phillips and Desmond had their discussion, Desmond decided his activism in defence of Black lives was more important than his biweekly column. The same day he announced he would end his column, the Star’s public editor, Kathy English, wrote a missive explaining why she agreed with Phillips’s decision to bring Desmond in for a sit-down.

“While there is some precedent at the Star for columnists—not news reporters—to take an advocacy stance in the community,” English explained, “[The] fact that a public meeting of a democratic municipal government committee discussing an important matter of public interest was brought to a halt as a result of Cole’s actions would seem to go beyond advocacy to an entirely different level of the journalist/activist becoming the story.”

But consider, for a moment, that Desmond Cole isn’t just a columnist who writes about race. He cut his teeth on the type of advocacy journalism that has a long, deep history in Canadian media. Michele Landsberg, renowned feminist activist, and Linda McQuaig, darling of social and labour movements, have both written regularly for the Star, as have the Kielburger brothers. What is it about their advocacy that deems them acceptable within the sphere of journalism, that Desmond’s own advocacy violated? For that matter, what is it about Barbara Kay’s advocacy in support of men’s rights groups which keeps her in good graces at the National Post? What is it about Joe Warmington’s ceaseless dedication to the Ford family that didn’t put him offside? Or Faith Goldy’s advocacy at a Rebel anti-anti-Islamophobia rally, giving an address before a line-up of Conservative Party leadership hopefuls?

Of course, the answers are clear to many in the Black community. It’s not the mere activism that matters, but the type of activism Cole has undertaken. By pushing him into a choice between Black lives and his byline, the Toronto Star has shown its inability to evolve beyond benevolent liberal racism.

And when I say “racism,” I don’t take the word lightly. As I’ve said before, white supremacy is like carbon monoxide: odourless and tasteless, one only truly understands its effects once they are being suffocated by it. Racism is merely white supremacy in weaponized form, inflicted by one person or group unto another, and often inflicted without malice or ill intent.

The Toronto Star has done vital work in exposing the degree to which Toronto Police have targeted carding to scrutinize racialized minorities, and English mentioned this in her column. But the Star has also needlessly smeared the Somali community—a community already dealing with painful stigmas and stereotypes—when Robyn Doolittle and Kevin Donovan broke the Rob Ford crack scandal. In a story exposing Ford’s drug abuse and reckless behaviour, the word “Somali” was used 11 times, and even English herself admitted the Star “went overboard” with the references.

This is the reality of benevolent liberal racism as it affects Black Canada. We’ve long come to expect our peers, colleagues, and supposed allies to place order over justice, and even our lives. We have come to expect the hand offered in support may later be the one to slap us in the face. The Star may not have fired Desmond, or even threatened the future of his column, but their priorities were made clear. And by English’s reasoning, the Star has no place for the slew of contemporary Black activist writers, many of whom are no strangers to street-level protest. Neither would there be a seat at the table for high-profile activists like Deray McKesson, Shaun King and Brittany Packnett, who have found their voices in U.S. media. Revolutionary giants like James Baldwin and Angela Davis? Doubtful, too.

I’m sure Desmond will be just fine. He’s been at this game for years, and along the way, he’s had to put up with the ignorance, lack of compassion, and even undermining from his colleagues in the journalism field. And it’s not surprising he would give up his column before compromising his principles. No, I save my pity for Canadian journalism, at a time where the limits to (and even harm done by) its overwhelming whiteness are coming into sharp focus. Maclean’s is no stranger to this problem; it’s had (and still has) its fair share of missteps rooted in a needless struggle finding ways to draw from and speak to audiences outside of Old Stock Canada.

I’m willing to accept that Desmond’s activism contravenes the Star’s rules, and perhaps even those of journalism at large. But if those rules call for Black journalists to stand down when our lives and freedom are on the line, well, don’t be surprised when we put down the pen and put on our marching boots instead.