Canada’s agricultural land is being subsumed by development around our biggest cities. But protecting that land comes with its own problems. 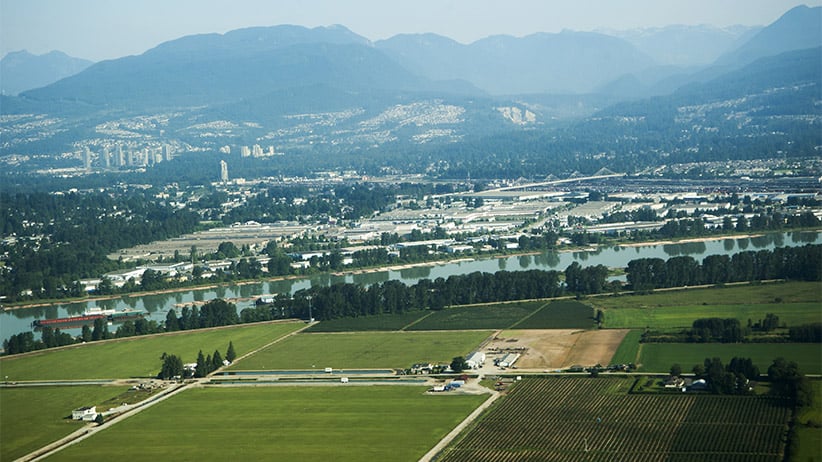 Aerial view of farmlands in the Fraser Valley near Vancouver, BC. (Marlene Ford/Getty Images)

Canada was once a country of farms. At Confederation, four out of every five Canadians were farmers. Today, farmers comprise less than two per cent of the population and produce a mere 1.1 per cent of GDP. Should it come as any surprise that the amount of farmland in Canada is shrinking, as well?

Last week, Statistics Canada released a comprehensive look at agriculture in Canada, bringing together the latest economic, geographic and ecological indicators. The most noteworthy observation: Nearly one million hectares of “dependable agricultural land” has disappeared from cultivation over the past 10 years, most of it subsumed by development around Canada’s biggest cities.

Given that most Canadians still retain a deep emotional attachment to our country’s farming heritage, as well as growing preferences for local food and farmers’ markets, the question of how much land should be farmed, and where, has become a pressing public policy issue. We should be careful what we wish for.

Canada is blessed with more than 50 million hectares of good-quality farmland. More than half of this is on the Prairies, with the rest scattered across other provinces, in particular, around the lower Great Lakes and St. Lawrence Valley. Between 2001 and 2011, however, the supply of this farmland declined by 969, 802 hectares, or 2.6 per cent. It’s the biggest drop in any 10-year period going back to 1971. And it’s a trend that’s not about to stop.

“As Canada’s population grows and cities develop and spread outward, the loss of some of the country’s best farmland will likely continue,” StatsCan observes, pointing out Canada’s fastest-growing cities tend to be located near the best agricultural zones.

That said, the Prairies are at little risk of being paved under. Canada’s position as an agricultural powerhouse is in no way threatened by urban sprawl, although the best farming regions of Ontario and Quebec are under significant pressure. It’s also worth noting the resiliency and innovation inherent in the agricultural industry. One little-noticed aspect of Canada’s recent farmland inventory is that the Taiga Plains of northern Alberta and western Northwest Territories appear for the first time as a viable agricultural area, with almost 2,000 hectares of recognized farmland—the result of technology and climate change. Agriculture is constantly adapting to new conditions and, thus, the supply of farmland is not fixed. Plus, land set aside for nature preserves has been growing, even as farms disappear.

Further, as Canada transforms itself into an urban nation, we should expect the countryside to change in tandem. Earlier this month, StatsCan also released its first-ever estimates of GDP by metropolitan area. The six largest cities in the country (Toronto, Vancouver, Montreal, Calgary, Edmonton and Ottawa-Gatineau) now produce nearly half the entire national GDP. With cities the locus of economic growth in Canada, it stands to reason these areas will require greater land resources as they swell in population and activity. Why constrain our strongest players? These same trends are playing out elsewhere: The United States, Russia and Australia have all experienced steeper drops in farmland over the same period.

To date, most efforts at protecting Canada’s farmland have come in the form of greenbelts and agricultural land reserves that restrict development on agricultural land near cities. But there is a cost to such measures. Limiting new land available for housing in areas of high growth inevitably pushes prices higher. Considerable academic evidence is available on this effect in Boston, New York and California. In Britain, economists argue that the greenbelt surrounding London is at least partly to blame for the fact that new home prices are 40 per cent higher than in comparable European regions with similar density, such as the Netherlands. At home, these price effects are felt most deeply by lower-income Canadians. With housing advocacy groups recently demanding Ottawa spend $44 billion over the next 10 years to combat a lack of affordable housing, we shouldn’t overlook the role played by farmland protection in driving up home costs.

Where there’s a conflict between the best economic use of existing farmland and a public desire for its preservation close to urban centres, protection should be used carefully and with an eye on possible fallout for Canada’s most vulnerable citizens. Rather than permanent reserves, it may make more sense to create rolling greenbelts that slowly shift outward as cities’ needs change.

Finally, cities themselves might consider what they can do to protect Canada’s farming legacy by loosening rules on chicken coops and other urban farming practices. If we’re losing farmland on the outskirts of town, perhaps it makes sense to shift more of it downtown.