The Trans Mountain pipeline and the end of the ‘veto’ fallacy

Today's appeal court ruling rejects the notion of First Nations having a veto over oil projects. But it's not the end of the legal saga. 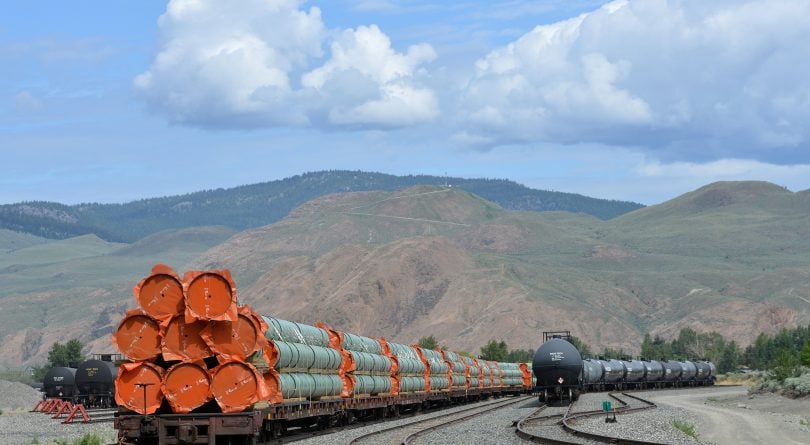 Steel pipe to be used in the construction of the Trans Mountain expansion project sit on rail cars in Kamloops, B.C. (Dennis Owen/Reuters)

Steven Guilbeault, the new Heritage Minister, took less than 24 hours to cram his comment about licensing media back into the toothpaste tube from whence it came. Not all aspirational-sounding but ultimately daft and pernicious comments by Trudeau Liberals are stuffed away so quickly. Their perniciousness can linger—in one case, nearly seven years.

With their pipeline ruling on Tuesday, judges with the Federal Court of Appeal finally exorcised the misbegotten spirit of a Justin Trudeau comment at Calgary’s Petroleum Club on Oct. 30, 2013, which he made months after winning the Liberal leadership: “Governments may be able to issue permits, but only communities can grant permission.”

He’d stopped using this catchy soundbite by the time he became Prime Minister in 2015, and his government has since tried to sidle away from it. But the idea it fostered—that the consent of a single community or First Nation can be vital, or fatal, to a project—has remained a bedrock component of arguments to block natural resource ventures.

Tsleil-Waututh, the B.C. First Nation with territory at the Trans Mountain pipeline’s terminus at Burrard Inlet, brought this argument to its second bid to thwart federal approval for the project. Its lawyers contended that Canada should have sought Tsleil-Waututh’s consent—and indeed, the federal government had stated a desire to secure its “free, prior and informed consent” ahead of this renewed round of consultations.

“That being said,” the judges wrote in their decision, “Canada was under no obligation to obtain consent prior to approving the Project. That would, again, amount to giving Indigenous groups a veto.” (Italics mine.)

The appeal court’s unanimous decision repeatedly rejects the notion of First Nations having a veto over this oil project or others. The judges write that the bands could not demand that Ottawa accommodate all their demands to change the pipeline route or safeguards, lest that be a “de facto veto right.” They also decry attempts to “tactically use the consultation process as a means to try to veto it.”

This wasn’t the first major court ruling to slay the notion Trudeau’s comment evoked. Tuesday’s ruling cites the many past decisions that put paid to claims that a single Indigenous group’s refusal can block resource development. In fact, the 2018 Federal Court of Appeal ruling that quashed the Trudeau government’s first Trans Mountain approval also clarified that no First Nation had veto ability—shoddy consultation was the fatal problem in that case, which Ottawa strived this time to remedy. But the victorious First Nations in 2018 hailed that decision as proof their consent was needed, and frustrated Alberta energy companies echoed that perception.

In the new ruling, hailed in tandem by Trudeau’s federal government and Jason Kenney’s Conservatives in Alberta, the language around project consent is separate from the meat of the ruling: that this time Ottawa adequately consulted First Nations communities and was more open to making accommodations than it was on its last pass. The federal government had bulked up its consultation teams on its second attempt, and hired Frank Iacobucci, that Swiss Army knife of former Supreme Court judges, as its guide through this process. “Contrary to what the applicants assert, this was anything but a rubber-stamping exercise,” the judges write.

Leaders from Tsleil-Waututh and its three fellow appellants lamented their fresh legal setback as a blow to reconciliation. Yet the judges also anticipated how their ruling may fit with that ever-important concept, too. “The fact that consultation has not led the four applicants to agree that the Project should go ahead does not mean that reconciliation has not been advanced,” the ruling states. “Put another way, reconciliation does not dictate any particular substantive outcome … Where there is genuine disagreement about whether a project is in the public interest, the law does not require that the interests of Indigenous peoples prevail.”

This approval brings unequivocal victory to Alberta, the oil sector and the federal government that owns this pipeline. But it can’t be considered a loss for Indigenous peoples. After all, as the judges note, Canada offered to consult with 129 potentially affected Indigenous groups, of which 120 either support or do not oppose the Trans Mountain expansion. In fact, two of the six B.C. First Nations that took the project to court this time backed out of the appeal a few months ago: both signed benefit agreements with Trans Mountain, joining the dozens of others that will reap material gains from the pipeline in the future, as the Trans Mountain line’s current capacity triples to 890,000 barrels a day.

Yet nor does it mark the end of the legal saga for Trans Mountain. Rather, it looks more like the last major hurdle the project must overcome. The quartet of anti-pipeline Indigenous groups have already sought leave to appeal to the Supreme Court to fight the narrowed scope of this case, and may try fighting the actual findings of Tuesday’s decision at the high court as well. But there’s no guarantee those judges will even hear their cases. Should Ottawa ever formally endorse the United Nations Declaration of the Rights of Indigenous Peoples, which has its own language around consent for interventions on Indigenous land, the waters may be muddied anew. But that may never affect this project.

RELATED: The Trans Mountain expansion will struggle for years—even if it gets the green light in 2019

The final true battle will be protest and civil disobedience, with Standing Rock in North Dakota and the Coastal GasLink pipeline fight in Wet’suwet’en territory as likely models. Expect cross-border solidarity to bolster the protesters’ numbers, as it did at Standing Rock, while the RCMP and government authority response in the GasLink fight may provide a preview of enforcement against Trans Mountain resistance. The protests could also occur along the pipeline route in both the B.C. Interior and on Burnaby Mountain. Small wonder that Kenney said he’ll reserve his celebrations until expansion is complete in 2022.

Still, he and other pro-pipeline advocates can tip their beverages to mark this demise of the veto fallacy, after what must have seemed to them an interminably long run. “We can’t get anything built in Canada,” they grumbled for a while—along with “the goalposts keep shifting.” They now have the clearest signal yet there is a way through to their goal.