There's been no flood of Americans heading north. Well, not U.S. citizens at least.

But a lot more people who came legally to the U.S. from other countries have fled Trump's America, making Canada their home 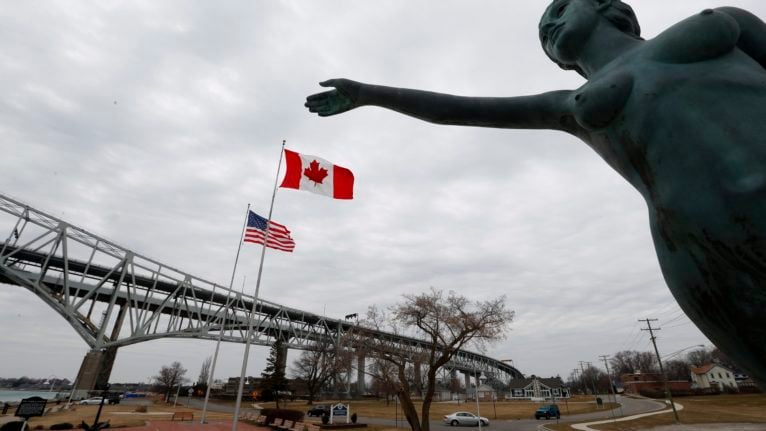 The jarring indignity of the first Trump-Biden presidential debate sent many U.S. viewers rushing to look up how to move to Canada, according to Google Trends data. If this felt familiar, it’s because it’s a recurring phenomenon of the Trump era. The same search terms skyrocketed in March 2016, as Trump was sealing the Republican nomination; the surge of keyboard curiosity even crashed Canada’s immigration ministry website briefly on U.S. election night. (Casting eyes northward is, unsurprisingly, very much a Democratic phenomenon; the only comparable pre-Trump spike came in November 2004, when George W. Bush won a second term.)

If past is prologue—although really, so little of the past has prepared us for this funhouse-mirror age—don’t expect people to vote with their feet after they’ve tapped with their thumb or mouse. There’s been no marked jump in immigration to Canada since the current resident of the White House relocated from Trump Tower. At least, no surge of northbound American citizens.

U.S. students haven’t flocked north in any greater numbers for university since 2015, according to data from Immigration, Refugees and Citizenship Canada. Nor have those who have obtained work permits.

There has been a moderate uptick in the number of Americans becoming Canadian permanent residents—a few more thousand newcomers per year than in Barack Obama’s latter years. But under Trudeau government targets during the same period, overall immigration to Canada has risen, too. “Prior to Trump, three per cent of all new immigrants to Canada were coming from the U.S., and under Trump it has remained at three per cent,” says Kareem El-Assal, policy director with CIC News, a immigration trends website run by the Montreal immigration law firm Campbell Cohen. 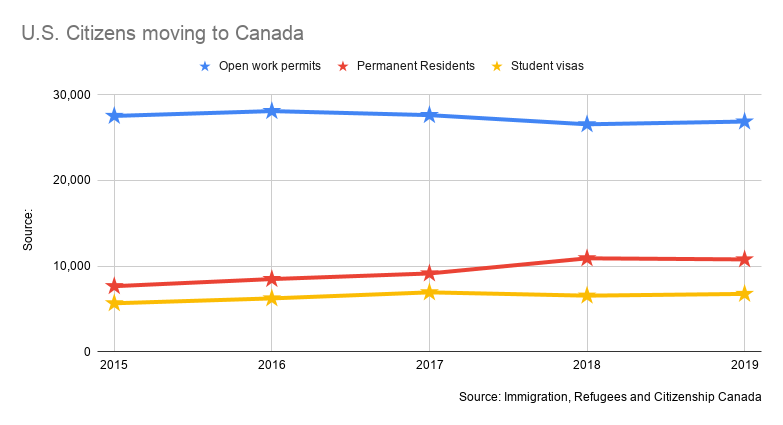 Much of the web-searching at moments of Trump-induced high anxiety is likely idle curiosity. But even earnest, spur-of-the-moment inquiries would collide with a hard reality: it’s not that easy to immigrate to Canada, a country with a global reputation as welcoming but also one with well-defined standards. Of course, it’s harder when a pandemic has indefinitely shut the land border. Immigration of all types has slowed because of the coronavirus, from the United States and other countries.

While American citizens aren’t flocking north, those who live in the United States but cannot vote against (or for) Trump have been  coming here at a greater pace. The growth in U.S. residents who are not American citizens coming to Canada is occurring on at least two fronts. One is the Express Entry system for economic migrants, a points-based approval system set up by the Harper Conservatives in 2015 to erase the backlog of permanent resident applicants. Statistics show that, while 622 U.S. residents got the right to apply through the Express Entry system in 2015, the number shot up to 5,822 in the first year of Trump’s presidency and then nearly doubled the following year, far outpacing growth in the overall program. Fewer than one-fifth of those U.S. residents were naturalized Americans, as the chart below shows. Many likely hail from India, and were in the United States on temporary work visas, says El-Assal.

Non-citizens in America have been whipsawed and jolted by the Trump administration’s policies and rhetoric against immigration, both legal and illegal. El-Assal cautions against chalking up the entire bump to Trumpism; in commentary posted on his website last week, he notes the longstanding uncertainty around the United States’ stricter immigration system, and the fact the U.S. has, proportionally, far fewer permanent immigration spots than its northern neighbour.

Another sharp rise in non-naturalized U.S. residents coming to Canada is certainly owing to Trump: asylum seekers. In his first year as president, 20,593 were intercepted by RCMP crossing at “irregular” spots along the Canada-U.S. line, mostly into Quebec; some 19,419 and 16,503 arrived in the following two years, respectively. Before the immigrant-deriding president took office, border-jumping refugee claimants each year numbered in the hundreds. In the last couple of years, many such claimants have used the U.S. as a transit point, flying into New York airports only to leave for Canada within days.

But several thousand of those who’ve come since 2016 had become fearful, or failed under the Trump administration’s refugee claim system, and came to Canada for one last chance at refugee protection. Or, like the Haitians who’d come to the U.S. after the devastating earthquake in 2010, they wanted to dodge a mass deportation that Trump proposed.

The growth of U.S. residents leaving for Canada is among those who reckon their chances of being allowed to stay in Trump’s America aren’t good. Those who have citizenship and a choice to stay in that turbulent, troubled nation might Google “moving to Canada,” but they haven’t been putting their search terms into action.