By Maclean's staff, CityNews and the Canadian Press July 23, 2018 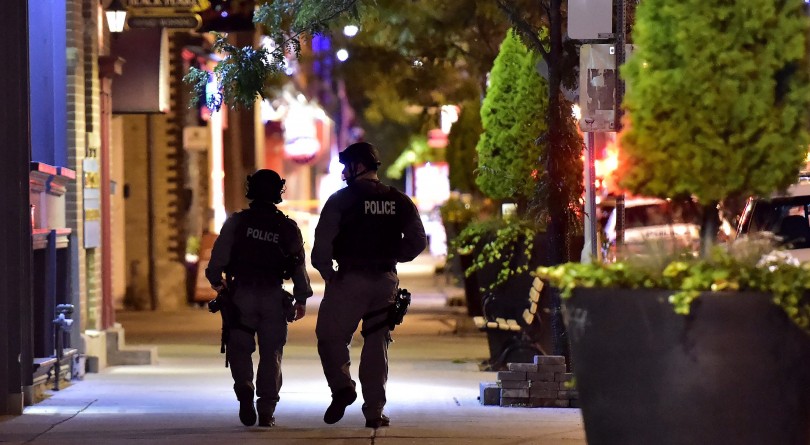 Tactical police officers walk along Danforth Ave. at the scene of a mass casualty incident in Toronto on Monday, July 23, 2018. (THE CANADIAN PRESS/Frank Gunn)

Two people were killed and 12 people were injured after a shooting in a popular Toronto neighbourhood late Sunday that ended with the death of the suspected gunman, authorities said as they worked to determine what motivated the violence.

Who was the gunman?

On Monday, the provincial Special Investigations Unit identified the shooter as Faisal Hussain, a 29-year-old male from Toronto. Cell phone footage taken during the attack shows a thin man clad in plain, dark pants, jacket and ball cap, carrying a black handbag with a shoulder strap. He is seen walking the sidewalk lined with bar and restaurant patios before stopping, raising a handgun in his right hand and firing into one of the buildings.

While his motive remains unclear, his actions on the video appear both deliberate and indiscriminate. Chief Saunders has asked the public for information on the gunman, or any video residents or businesses in the area might have that might reveal his movements or whereabouts in time leading up the shooting. The man was killed, police say, following an exchange of gun fire with officers. Sources are now reporting that Hussain killed himself.

Statement from the gunman’s family

“We are at a terrible loss for words but we must speak out to express our deepest condolences to the families who are now suffering on account of our son’s horrific actions.

We are utterly devastated by the incomprehensible news that our son was responsible for the senseless violence and loss of life that took place on the Danforth.

Our son had severe mental health challenges, struggling with psychosis and depression his entire life. The interventions of professionals were unsuccessful. Medications and therapy were unable to treat him. While we did our best to seek help for him throughout his life of struggle and pain, we could never imagine that this would be his devastating and destructive end.

Our hearts are in pieces for the victims and for our city as we all come to grips with this terrible tragedy. We will mourn those who were lost for the rest of our lives.”

Who are the victims?

Initially, police said that one person was pronounced dead, but subsequently announced early Monday morning that a second victim had died. Saunders identified the victims as an 18-year-old woman and a 10-year-old girl.

Sources later confirmed that the 18-year-old woman is Reese Fallon and the 10-year-old girl is Julianna Kozis.

Five other victims are being treated at St. Michael’s Hospital. In total, 13 people suffered injuries ranging from minor to serious in nature. Fifteen people, eight female and seven male, were shot. Their ages range from 10 to 59 years old.

Who rushed to help the victims?

Bystanders and business owners in the Greektown area stepped in to help those injured in the shooting.

Tanya Wilson, owner of Skin Deep Inked Tattoo Studio on Danforth, described helping an injured older woman and young man. She let them into her studio, donned surgical gloves and tried to treat their wounds with makeshift tourniquets.

“I ran to the back and found an article of clothing. I tied up above the wound and I just tried to keep them calm while I could try to reach police or ambulance, which was nearly impossible, I assume because everybody else was phoning at the same time,” she told CP24.

Michael Kozaris was working inside Mezes restaurant, located on the north side of Danforth when he heard the gunshots. His co-worker Nick was shot while outside and came indoors with his hand bleeding.

Kozaris called 911 but was on hold for several minutes. Finally, a friend drove his coworker Nick to Michael Garron Hospital. Last he heard, he was being X-rayed and the bullet was still lodged in his hand.

Jody Steinhauer was celebrating her birthday at a restaurant on Danforth when the shooting occurred. “We just got all of the kids and everybody to the back of the restaurant, under tables. Everything just happened so fast, it was frightening,” she said.

Saunders deferred to the province’s Special Investigations Unit, which investigates incidents involving police that result in death or serious injury, on the circumstances surrounding the death of the suspected shooter. An SIU news release confirmed six investigators and three forensic investigators were assigned to the shooting.

Toronto Police will investigate the shootings themselves. “It is a bit of a dance between the two entities,” Saunders told reporters on Monday. “We’ve got the substantive murder investigations, plus the shootings. There has to be some work in concert.”

How can you help?

Toronto Police are asking any members of the public who have information about the incident to contact their tip line at 416-808-2222 or through their website.

If you’re able to, donate to Canadian Blood Services. They’re accepting donations, both monetary and in blood.

In addition, a community member with the help of local city councillors Paula Fletcher and Mary Fragedakis has started a GoFundMe page to support the victims and their families with medical and funeral expenses, as well as lost wages.

What else we know so far

The incident began around 10 p.m. in Toronto’s Greektown neighbourhood, which is filled with restaurants, bars and boutiques.

A man armed with a handgun made his way down busy Danforth Avenue, firing as he went, turning the tranquil scene into one of chaos and horror.

Chief Saunders said that a woman was killed and a girl, aged eight or nine, was critically injured.

Many of the other victims were rushed to trauma centres. There was no immediate word on their conditions.

Saunders told a media briefing that the shooter had exchanged fire with police officers and died at the scene. He could not immediately confirm whether the gunman was hit by police fire, but he said that no officers were injured.

John Tulloch said he and his brother had just gotten out of their car on Danforth when he heard about 20 to 30 gunshots.

“We just ran. We saw people starting to run so we just ran,” he said.

An army of police, paramedics and other first responders soon descended on the scene, while a crowd of area residents, some in their pyjamas emerged from their homes to see what was going on.

A woman, who only gave her first name as Mary, said she was in the Pantheon Restaurant on Danforth Avenue when she saw a little girl on a stretcher being placed in an ambulance.

“Tonight, a despicable act has been perpetrated on the Danforth in our city,” he said. “On behalf of all Toronto residents, I am outraged that someone has unleashed such a terrible attack on our city and people innocently enjoying a Sunday evening.”

Tory thanked the first responders who rushed to the scene, and extended prayers and condolences for the victims on behalf of all Toronto residents.

The mayor later issued a statement saying he’d talked to Ontario Premier Doug Ford who conveyed his condolences on behalf of the province and offered any assistance required.

Tory said this incident hasn’t given much time for the city to heal after 10 people were killed just a few months ago in a van attack.

In April a white van mounted a sidewalk on a busy Toronto street and ran down pedestrians.

“It’s almost inconceivable that these things can happen,” said Tory. “We were so used to living in a city where these things didn’t happen and as we saw them going on in the world around us [we] thought they couldn’t happen here.”

“I can say to people to just try and stay calm while police try to figure out what happened here.”

Just this weekend an additional 200 police officers were deployed in various areas of the city in response to a recent spike in gun violence in Toronto that officials have blamed primarily on gang activity.

What politicians have said about the shooting

This is a tragedy and on behalf of all Toronto residents, we are extending our prayers to all the innocent people attacked tonight, their families and their friends.

My heart goes out to the victims and loved ones of the horrific act of gun violence in Toronto. Thank you to all the first responders for acting quickly to help everyone affected.

My thoughts are with everyone affected by the terrible tragedy on the Danforth last night in Toronto, and may the injured make a full recovery. The people of Toronto are strong, resilient and brave – and we’ll be there to support you through this difficult time.

I am shocked and saddened to hear about the shooting at Danforth/Logan. I have reached out to the police for more information and to see if there is any need for assistance. As a neighbour, I will be with you to see how the community can have comfort at this difficult time.

Less than 24 hours after the Danforth shooting, Toronto police reported that a victim had sustained life-threatening injuries in another shooting, this time in Toronto’s west end.

—with files from CityNews and Steve Hennigar, Alanna Rizza and Diana Mehta of The Canadian Press