Toronto van attack coverage has been plagued by fake news, screw-ups and lies

From misspellings of the suspect's name to claims the driver was an Islamic terrorist, fiction has shared equal footing with fact online 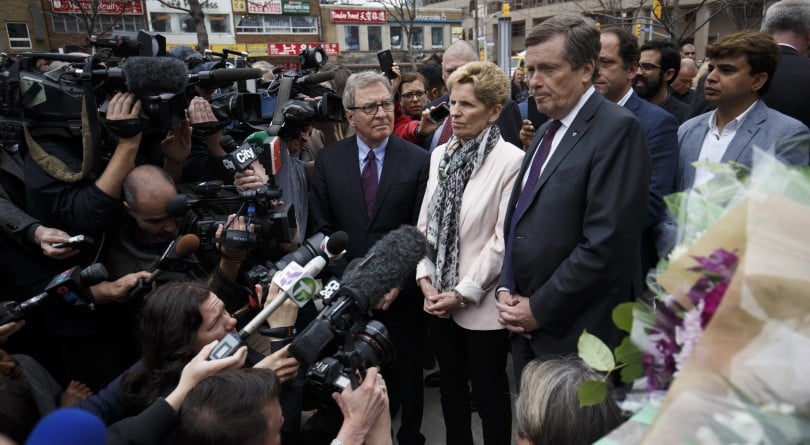 TORONTO, ON - APRIL 24: Ontario Premier Kathleen Wynne, middle, and Toronto Mayor John Tory, right, visit a memorial for victims of the mass killing on Yonge St. at Finch Ave. on April 24, 2018 in Toronto, Canada. A suspect identified as Alek Minassian, 25, is in custody after a driver in a white rental van drove into multiple pedestrians, killing 10 and injuring at least 16. (Photo by Cole Burston/Getty Images)

Covering breaking news is challenging, requiring reporters to separate fact from fiction under intense deadline pressure. The speed at which misinformation, unsubstantiated theories and hoaxes can spread online (sometimes from malicious intent) complicates this task. In the hours after the driver of a van killed 10 pedestrians and injured many others in Toronto on Monday, a range of false premises and erroneous reports gained traction.

Some people were confused by the name of the alleged perpetrator, Alek Minassian, a 25-year-old from Richmond Hill, Ont. In attempting to glean any info about the suspect, some reporters found the Facebook profile of Alex Minassian—who, coincidentally, is another young man from Richmond Hill. The latter Minassian and those close to him were apparently hounded by news media, prompting him to clarify on Facebook, “Not me. No connection. NBC, ABC, CBC, stop harassing my friends and family.” 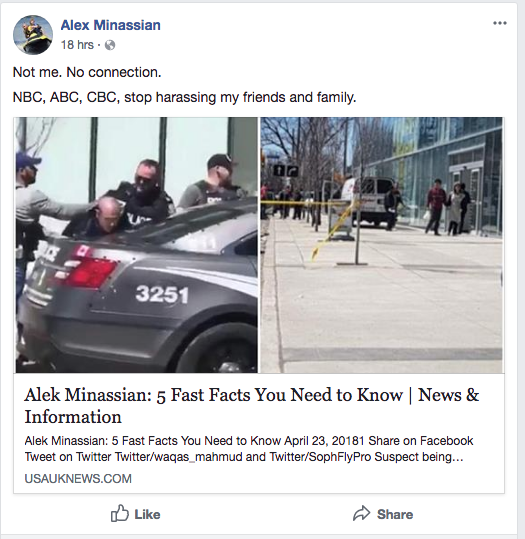 Some outlets are still getting the name wrong, one day later.

It was also reported Monday that Minassian was known to police. “Law enforcement sources are indicating that the individual in custody is known to the police up there in Canada,” a former New York police commissioner told MSNBC. The claim, at that point unverified, circulated on Twitter. Michelle Malkin, an American conservative political commentator, used the claim to criticize Toronto Mayor John Tory’s response to the incident:

9 dead, 16 injured in Toronto after deliberate attack by van driver suspect Alek Minassian, who was previously know to law enforcement.

Toronto mayor’s response? Oh, hey, this tragedy is tragic, but let’s pat ourselves on the backs for our iINCLUSIVENESS & UNDERSTANDING. https://t.co/rFj6oOKNU5

Many dubious and unverified claims have come from those eager to ascribe an ethnicity, religion and motive to Minassian. Faith Goldy, who was fired by The Rebel after appearing on a podcast affiliated with a neo-Nazi website last year, rushed to livestream from the scene yesterday. “I’m at Yonge and Finch, which has become a scene to what folks are now calling a terrorist attack on the streets of Toronto,” she said.

TERROR IN TORONTO (on the scene) https://t.co/YZkDCPrus8

No law enforcement official or political leader has labeled the attack as terrorism. “The events that happened on the street behind us are horrendous but they do not appear to be connected in any way to national security, based on the information available at this time,” Goodale said Monday. Canada’s national threat level was unchanged, too. Minassian’s reasons for the attack are still unknown. He was charged Tuesday with 10 counts of first-degree murder and 13 counts of attempted murder—and no terrorism-related offences.

Still, the lack of information about what motivated Minassian didn’t stop Rebel commentator and U.K. resident Katie Hopkins from leaping to conclusions and blaming Prime Minister Justin Trudeau for the attack.

Ten dead Trudeau. Ten. No one needs your thoughts. Do not say you carry on as normal. That you ‘stand united’. Those dead men, women and children do not. Their families do not. You brought this. You are complicit in it. Politicians like you are terrorist shills. #TorontoAttack pic.twitter.com/Eil8hFWZ5a

A jihadist has just killed 9 people and the Mayor is already out virtue signalling. https://t.co/sw2lJv9aEz

Again, officials have not said anything publicly about Minassian’s ethnicity, religion or motive. But the idea may have gained traction in part due to an early witness account. CBC reporter Natasha Fatah tweeted that a witness described the suspect as “wide-eyed, angry and Middle Eastern,” which earned more than 1,500 retweets. Fatah also tweeted that a different witness said the driver was white; that one got only 118 retweets.

Infowars, the preeminent source of bizarre conspiracy-minded fever dreams, posted an article with the headline, “Identity released of Islamic man who used truck to kill 10 in Toronto.” Infowars host Alex Jones ranted for nearly 30 minutes that mainstream media is somehow covering up the truth about Minassian.

The video is full of false statements and loopy tangents, including Jones’s description of Minassian from Monday. “He’s got a little white Islamic hat on. It looks like he’s wearing the customary nightgown the men wear,” he said. The least objectionable statement was his contention that Toronto is a “glistening and high-tech” city. He goes on, “It’s the most space-age city I’ve ever been in.”