Vancouver's koi have looked into the face of death. It has beady eyes.

The marauding river otter has returned, touching off an oh-so-Vancouver frenzy of joy, profiteering and cultural conflict 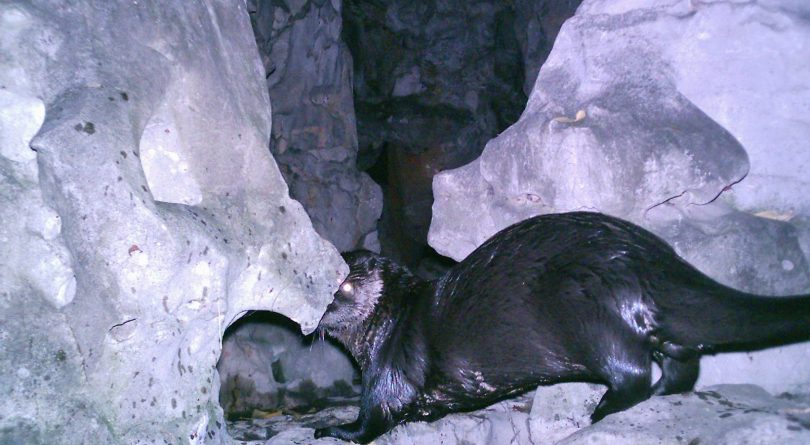 A surveillance shot of the otter during its return to the Dr. Sun Yat-Sen Classical Chinese Garden on Oct. 31 (Vancouver Park Board/CP)

The incident left six dead in Chinatown the weekend after Halloween, prompting an evacuation. Not again, thought those tasked with rounding up the vulnerable to prevent further carnage, haunted by the ghosts of last year’s 11 victims. As news broke, reporters crowded the scene with live updates and a surveillance photo emerged. The culprit bore a striking resemblance to the suspect that got away last year. Not again, thought the clean-up crew.

The miscreant was a hungry otter and the dead, rather the eaten, were ornamental carp, the residents of a traditional Chinese garden in downtown Vancouver. Sorry to have been so koi about it. The second annual otter incident had something for everyone. Puns. Mystery. Memes. Cultural division. Shameless profiteering.

The Vancouver Board of Parks and Recreation had learned its lesson after the furry terrorist’s viral debut at Dr. Sun Yat-Sen Classical Chinese Garden last year. After an otter broke in and ate 11 fish, some of them very old and very large, the surviving fish were rescued and brought to other waters. Four-foot steel plates and automatic closers were added to the two gates of the walled garden. About six months later, the remaining koi population was reintroduced to the pond, with more donated by the park’s Japanese counterpart, the University of British Columbia’s Nitobe Memorial Garden.

Everything seemed fine, but somewhere, the slinky bandit was waiting for another opportunity. At least, it might be the same otter, according to Vancouver’s Director of Parks, Howard Normann, who admits his expertise on this has been a surprising development in his career.

Here’s what could have happened, Normann explained. The otter could have been living in a neighbouring greenspace, where an artificial waterfall was recently shut off so the park could be winterized, just like it was last year. Upset at this change in habitat, he or she could’ve remembered last year’s feast and entered the garden by climbing over the steel plates, or just by walking through the front door, since human accomplices sometimes wedge in a rock to keep it ajar. We know for certain that the animal did not enter through a pipe, Normann said. All of the pipes are sealed. He checked.

As soon as koi were found dead on Saturday, the now-experienced park executives sprang into action. Within two days, the surviving koi were relocated, including one 15 or 20 years old that had escaped injury. The pond level was lowered. The otter traps were set, though the animal didn’t get caught. It’s a good thing they acted quickly since the otter seemed really hungry. “He probably would’ve killed them all,” said Normann. A couple of the dead koi weighed seven or eight pounds. “That feeds a family of four and this thing is just devouring it overnight.”

Normann said there has been widespread public response, with some residents demanding he “shoot the otter on sight” and others asking that an unlimited supply of koi be provided for the native creature to feed on. Neither option is being considered, especially given that ornamental koi are expensive, sometimes costing thousands of dollars per fish.

RELATED: Black bears at the dump, and the missing Trans-Canada link

But the city rapidly moved on from a combative conversation about the incident itself to a social media debate about what it all means symbolically.

On social media, #teamotter and #teamkoi hashtags sprang up again, a vestige of last year’s viral moment. Because this was Twitter in the year 2019, a light-hearted conversation very quickly evolved into a broader debate over cultural misunderstanding and sensitivity. It is insulting for #teamotter to celebrate the murder of a sacred animal. It is insulting for #teamkoi to demonize the river otter, which is native to this part of the world. Frankly, our society is being torn apart.

For example, the executive director of the nonprofit Hua Foundation opined in a tweet Sunday: “Reflecting on the #otterwatch2018 saga, it has surfaced how intellectually and culturally segregated we are as a city. Sure, we are ‘multicultural’ but we need to go beyond just the surface levels of cultural consumption to build the empathy and understanding of each other.”

A Twitter account posing as the otter itself took a pause from satire to ask for civility Monday. “I’m gluttonous and mischievous, but I also have a heart, in there, somewhere,” it said, addressing #teamotter denizens. “Please don’t be insensitive. It makes us all look bad.”

With a marine mammal’s lunch managing to create this level of social tension, at least on the Internet, it is not possible to sell, or to discuss selling, items that poke fun at the incident without attracting negative attention. Last year, a nonprofit group, Chinatown Today, produced #teamotter and #teamkoi buttons and offered to donate profits to the garden’s administrators. They declined, and the donation was redirected to B.C.’s Wildlife Rescue Association. This year, Chinatown Today is staying out of it. “The cultural conversation is an uphill battle,” the group said in a somber tweet Sunday. “Meanwhile, some community members view the whole thing as an insult. We do not want to profit from any of this. We learned.”

Still, a news website, Vancouver is Awesome, has created a t-shirt and mug with a cartoon of a cute, winking otter that’s munching on koi. They, too, had hoped to donate to the garden. But now they say they’ll use the money to symbolically adopt river otters from the World Wildlife Fund Canada.

Despite being a nonprofit organization that generally accepts donations, the Dr. Sun Yat-Sen Classical Chinese Garden, though moved by support following “the unfortunate event,” will not be accepting any donations “related to this incident,” said marketing manager Martha Nelson. “Should any organizations wish to create merchandise we would strongly encourage them to donate the proceeds to a wildlife organization.”

Meanwhile in the physical world, with no sign of the otter’s return, the park gates reopened Monday. That afternoon the garden was quiet, empty except for a couple of teenagers taking photos of themselves on one of its footbridges. The 15-foot stone walls that surround it muted the rush-hour traffic noise, but you couldn’t forget you were in the city, with tall buildings all around. The milky water was eerily still. Not a ripple.

Normann said it’s unclear whether koi will return anytime soon, if ever. The society that co-administers the garden will have to be consulted. New gates will be installed anyway, a plan that was already in motion before the weekend but one Normann hopes will do more to prevent a future attack.

This story can be what you want it to be. It can be about a renegade fluffy predator succeeding in a heist against all odds, or about docile creatures being brutalized with no way to escape, because, remember, the pipes are sealed. It can be about an assimilating society preying on cultural traditions or it can be about opportunistic apparel sellers.

But if you really want, this can be a success story. See, Normann offered another way to look at the whole saga, one that admittedly reflects very well on his employer. It could simply be a sign that the city is making progress with its biodiversity efforts. That its steady clean-up of waterways has been a success, and that wildlife are thriving. “Maybe this is an indication of the health of our system that we do have otters,” Normann said. He otter know.