Why British Columbia should hold another election—right away

With drama over the Speaker's chair, it's clear this B.C. legislature is doomed—so let’s get on with sorting it out at the ballot box 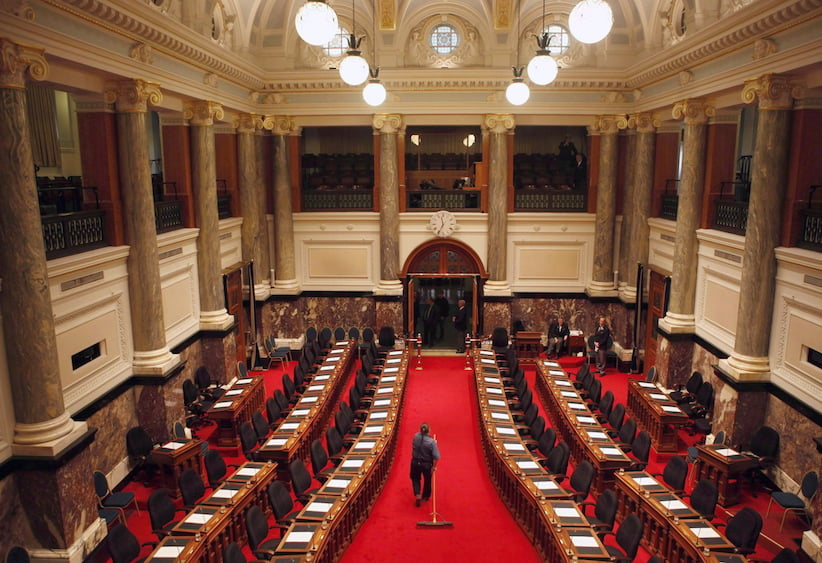 A cleaner readies the Legislative Assembly at the Legislature in Victoria on February 14, 2017. THE CANADIAN PRESS/Chad Hipolito

In May, not even a month ago, British Columbians took to the polls to elect 43 Liberals, 41 New Democrats, and three Greens. The governing Liberals managed a slight seat plurality with 40.36 per cent of the vote, while the NDP took in 40.28 per cent. Weeks after the vote, we’re still unsure who will govern the province after the legislature meets, most likely, this month. What fun!

To govern in the Westminster system, a premier or prime minister must command the confidence of the legislature—that is, they must have enough members onside to support their agenda and supply them with money to run the government, pay for programs, and so forth. While Premier Christy Clark currently has the most seats, the NDP and the Greens have struck a deal that would, in theory, allow NDP leader John Horgan to have enough support in the legislature to govern. First, though, he and Green Party leader Andrew Weaver need to bring down the government, since Clark refuses to resign. As the sitting premier, Clark gets a chance to test the confidence of the legislature, and she continues to govern until she resigns or loses a confidence vote in that legislature.

Here’s where things get tricky.

Someone needs to serve as Speaker of the legislature. Indeed, the body cannot function without a Speaker. And while the governing party typically provides a name, the Liberals have indicated they won’t put one forward this time around, and they don’t have to. That means that it’s up to the NDP and Greens to do so. However, if they do, they would have to instruct their Speaker to break with centuries of practice and vote to bring down the government when Clark presents her throne speech.

That means we are now in a situation in which one of the following must happen: the Liberals decide to bite the bullet and put forward a Speaker, the government falls, and the NDP and Greens have a go at governing (doubt it); the NDP and Greens put forward a Speaker to break tradition and turf the government, they go on to turn the Speaker into a partisan tool for months (could happen, but really shouldn’t); no one puts forward a Speaker, and we head back to an election (fun fact: this happened in Newfoundland in 1908).

So, as much as I love the summer—the beach reads, the patio drinks, the endless sunburns—British Columbians deserve another election, right away, in order to sort out the mess that they and the parties have made.

COUNTERPOINT: Why the B.C. Liberals should suck it up and offer a Speaker

This may be an unpopular argument, but after all, as Andrew Coyne has pointed out, the Liberals are under no obligation to support their opponents by offering a Speaker and facilitating an NDP government supported by the Greens. And he’s right. In an adversarial, partisan system, while parties may agree to cooperate, they certainly don’t have to, and plenty of their supporters don’t want them to. The Liberals get nothing from helping the NDP, other than the satisfaction of doing what some see to be the “right” and “reasonable” thing—but that doesn’t warm the benches on the opposition side. For their part, the NDP may go full-metal partisan themselves. “Getting strong feeling BC NDP intend to resolve impasse by turning Speaker into a partisan,” Coyne said on Twitter. “There should be hell to pay if they try.”

The role of the Speaker is to impartially manage proceedings in the legislature and, if necessary, to vote in the case of a tie (typically to continue to debate, or preserve the status quo, though Speakers do vote with the government on confidence matters). Given the deadlock, political scientist Emmett Macfarlane concluded on Twitter, “If the BC legislature can’t resolve itself, a [second] election is preferable to a lot of alternatives, like damaging the institution itself.”

So, our options right now seem to boil down to a partisan Speaker who may damage the credibility of the legislature while setting a questionable precedent in political hackery, or an inconvenient election.

On top of that, if the NDP and Greens do have a chance to govern and put forward an MLA from their side for Speaker, the legislature would be split 43-43 between them and the Liberals, with the Speaker breaking ties on the regular. That means that each day could by the government’s last—so the province would be in for months of instability (not necessarily because it would be a minority government, but because it would be such a razor-thin one). As the National Post’s Tristin Hopper put it: “An MLA with diarrhea could topple the government.”

His may be an ever-so-slightly too fine a point, but he’s right—and the same is true of one who misses a plane, sleeps in, decides to see their kid play hockey instead of attend a vote, dies, etc. In short: this legislature is doomed to fail, either by tainting an ancient institution or by collapsing in on itself like a dying star. And, in the meantime, we’re all stuck in limbo, waiting, guessing, wondering—the instability and unpredictability is unhelpful, to say the least. So, rather than risk the deleterious consequences of either, let’s skip ahead and get right to the election that’s likely coming in a year and a half or so, anyway. What’s a few weeks of democratically valuable hassle against months or years of uncertainty and potential damage to a central democratic institution?

In our democracy, the people are the ultimate arbiters of who gets to govern insofar as they elect the members of the legislature who get to determine who the premier will be. But it’s unclear where the popular will lies. In the current situation, the Liberals have tried to argue that the popular will is for them to govern (“We won the most seats, we won the most votes”); meanwhile, the NDP and the Greens have done the same (“Well, no, when you add us together, we won the most seats and the most votes; also, we can command confidence! We think. For a bit, anyway”).

MORE: How the B.C. Liberals squandered their shot to keep power

Besides, the popular will is hard to discern, anyway. We like to imagine that the people speak as one, but they almost never do. Folks vote for all kinds of different reasons, and there’s no guarantee that an election held on a Tuesday instead of the following Thursday wouldn’t produce different results; we’re a fickle and funny bunch. When votes are particularly close, like in the current situation in B.C., the popular will is even harder to know. Of course, we must respect the results of the election (as we should respect the NDP/Green deal, if they can make it work without damaging the reputation of the speakership), but we shouldn’t try to conclude too much from them, other than the fact that the province, on May 9, was deeply divided.

And yet, here we are. A deeply divided province, an election that was nearly a tie, a B.C. Liberal Party that has no reason to support its opponents, an NDP and Green Party that has little hope of much of a tenure in office, a legislature that may quickly become unworkable, a Speaker’s chair that risks being tarnished as a partisan seat, and a beautiful summer ahead of us that could be partially sacrificed so that British Columbia can enjoy a coherent, stable, and effective legislature and government for the moment and for the future.

So, let’s have an election. Then we can all go to the beach.