A comeback for banned books in Tunisia

After chasing out former president Ben Ali and his family, Tunisians can’t stop reading about them 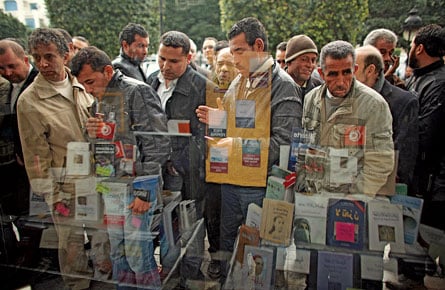 After chasing out former president Zine al-Abidine Ben Ali and his family, it seems Tunisians can’t stop reading about them. Long-banned books about the deposed leader, his children and much-detested wife, Leila Trabelsi, are turning up on bookshop shelves in the country, along with other once-prohibited volumes delving into corruption, Islamism and political repression under the regime. A sign reading “Livres interdits” (“forbidden books”) on display in the window of a prominent bookstore in the capital, Tunis, attracted crowds of passersby, writes the Irish Times.

Across Tunisia, taboo titles surfacing to the public realm include La Regente de Carthage, an unflattering portrayal of the former first lady, and writings by journalist Toaufik Ben Brik, a notorious critic of the president, according to the Guardian newspaper. Gone, it seems—hopefully for good—are the days when importing a book required obtaining a visa for it from the interior ministry, and keeping track of an ever-changing official list of prohibited foreign tomes.