A timeline of U.K. terror attacks

By the numbers: A look at all the terrorist attacks that have hit the United Kingdom since the 1970s 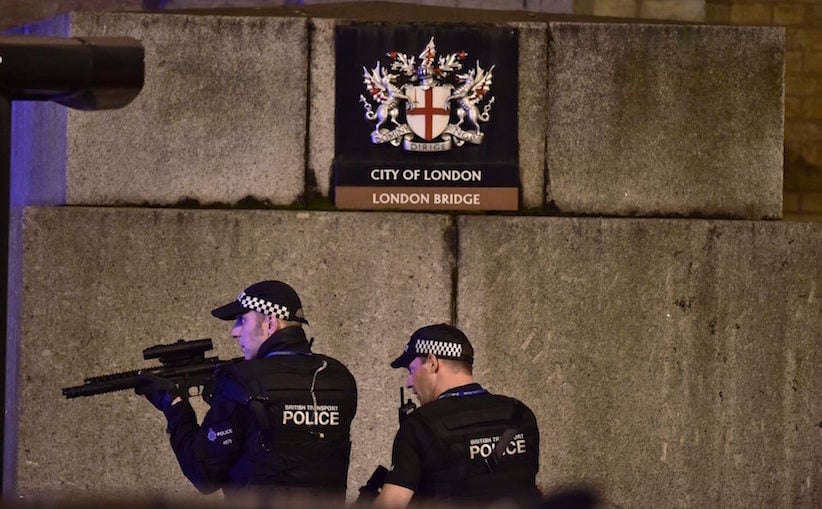 An armed Police officer looks through his weapon on London Bridge in London, Saturday, June 3, 2017. British police said they were dealing with “incidents” on London Bridge and nearby Borough Market in the heart of the British capital Saturday, as witnesses reported a vehicle veering off the road and hitting several pedestrians. (Dominic Lipinski/PA via AP)

On Saturday night at around 10 pm London police say a van traveling on London Bridge swerved off the road and ran down multiple pedestrians, followed by reports of stabbings. As of Saturday night, police had confirmed six people were killed and 20 injured, while police said three suspects were shot dead.

This is the third terror attack on U.K. soil so far in 2017, following an attack on London’s Westminster Bridge in March and then last month’s suicide bombing at a concert in Manchester. After the Manchester attack, MI5, the country’s intelligence agency, raised its threat level from severe to critical, meaning an attack was “expected imminently,” but then lowered it to severe on May 27.

The following chart shows the history of the U.K.’s threat level since the warning system was first introduced in 2006. (Casualty figures for the London Bridge attack are current as of Sunday morning.)

Since 1970, more than 3,400 people (victims and attackers) have died in terrorist attacks in the U.K., according to data from the Global Terrorism Database.

The deadliest attack in the U.K. in the last half century was on December 21, 1988, when a bomb detonated during Pan Am Flight 103 as it flew over Lockerbie, Scotland, after taking off from London. Two hundred and seventy people were killed in the explosion.

Two Libyan intelligence officers were charged with the bombing, but only one was convicted. Abdelbaset Ali Mohamed al-Megrahi was sentenced to 20 years in prison, while Lamin Khalifa Fhimah was acquitted.

The majority of the attacks (51.6 per cent) since 1970 were conducted by the Irish Republican Army.

Here’s a look at how the numbers break down by killed and injured:

And by the type of attack: 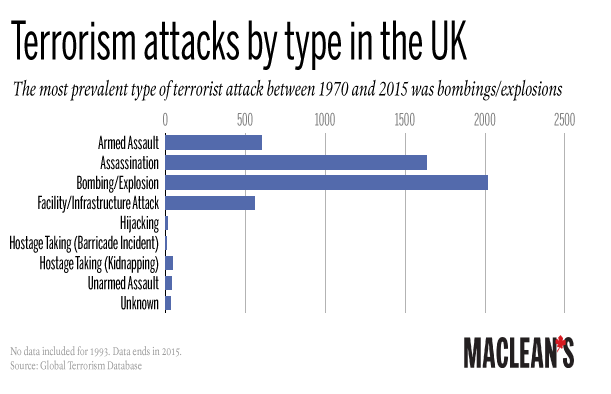 Updated: This post was corrected to state that the U.K.’s terror alert was lowered to severe several days after the Manchester attack.