Why Russia should fear the coming insurgency in Ukraine

All the key ingredients for a powerful insurgency now exist in Ukraine. If the battle turns to brutal urban warfare, Russia is in 'big trouble'. 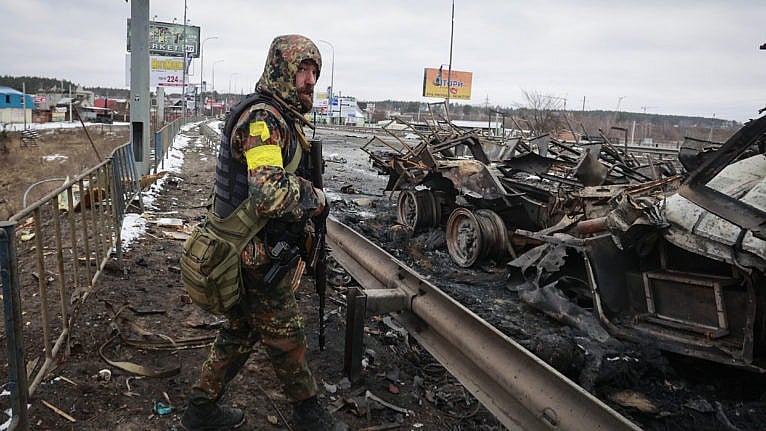 An armed man stands by the remains of a Russian military vehicle in Bucha, close to the capital Kyiv, Ukraine, on March 1, 2022 (AP Photo/Serhii Nuzhnenko)

Over the first week of its war with Russia, Ukraine’s military has demonstrated remarkable competence and bravery, in part due to the training it has received from NATO countries, including Canada. The expected Russian military juggernaut, meanwhile, has been massively underwhelming, suffering successive battlefield defeats and failing to the achieve the air superiority it was expected to quickly win.

But as the fighting moves into Kyiv, and other major cities like Kharkiv, the war is expected to shift gears. Urban warfare is the bane of any conventional army. No proven doctrine exists to tackle the complexities of fighting a war in the maze of city streets, where the local population is motivated to resist. And Ukrainians are deeply motivated—both by a president who has risen to the challenge of wartime leader and an international community that has rallied behind them in unprecedented ways.

Thousands of Ukrainian civilians are lining up at recruitment centres to join the fight.  Meanwhile, in Canada, the U.K., and elsewhere, leaders have suggested that citizens who wish to join the fight are welcome to do so, even encouraged.

This is looking like the start of an insurgency.

Maclean’s spoke to Dr. Eric Ouellet, a professor at the Royal Military College’s Department of Defense Studies in Toronto and an expert on insurgencies. Ouellet broke down what might be in store for the Russians and why, if Putin is at all rational, he should avoid it at all costs. This conversation has been edited for length and clarity.

Q: Why do you think a Ukrainian insurgency will be so costly for the Russians?

A: Well, the best way to understand what the Russians face is to look at what makes an insurgency successful. There are three main ingredients. One is legitimacy. The insurgent force has to be seen as legitimate by the population. That way they get all the logistics support they need—hiding weapons, hiding people, helping with transportation, money, recruits, etc. So that’s one aspect that makes Ukraine very strong from the get go.

The second characteristic is the insurgency’s actual capacity to inflict damage. In Ukraine, they have a very high level because of the military training they have received from countries like Canada, as well as the fighting in the Donbas region, where you have had independent Ukrainian battalions made up of volunteers. These people are still around, and they have real military experience.

The last characteristic of a successful insurgency is external support. Again, Ukraine is really starting at a very high level. The international community has shown that it is ready to back a long-term insurgency.All the pieces are in place. If the Russians try to go all the way–take Kyiv and Kharkiv and the rest of the country–and put a puppet government in place, that government will have zero legitimacy; it will face a very well-organized insurgency that has deep support.

Q: Fighting in dense urban settings has been an unsolvable puzzle for militaries, especially conventional militaries. Are the Russians in for a lot of trouble?

A: They’re going to be in big trouble. The problem with an urban insurgency is that you have a fairly high density of people. It’s very easy to hide in the population. And the only way to really fight against that effectively is to have well-established security and intelligence services to figure out who’s who. In a country where nobody wants to work with you, it’s going to be difficult, it will take a while to establish those resources. Even if you install a friendly government, it takes time for it to put in place loyal security services.

Before those services can start functioning efficiently, the Russians will have to rely on brute force, which brings us to a key dynamic in insurgencies: the spiral of oppression and legitimacy. In the face of a strong and determined insurgency, a Russian occupation will be needed for a long time, which will lead to further oppression and, knowing Putin, war crimes. That will just reinforce the legitimacy of the insurgency, which will in turn lead to more oppression.

You have this spiral of violence up to the point where eventually the occupier is forced to admit that it’s wasting its time, which is exactly what happened in Afghanistan.

Q: Afghanistan is an interesting historical example, as well as Syria. The Soviets in Afghanistan were somewhat sensitive to civilian casualties, but in Syria, the Russians have shown a total disregard for the rules of war. What posture will they take against a Ukrainian insurgency?

A: Afghanistan was a good example of the spiral dynamic I just mentioned. The Soviets started out brutally there but then realized all they were doing was growing the numbers of mujahideen, so they later softened their approach. But it was too little too late.

In Syria, they absolutely did not care about collateral damage. But in Ukraine, the situation is different. These are people Russia wants to absorb as part of greater Russia. So they won’t want to alienate them.

Q: Can an insurgency win here? Or what does winning look like?

A: One of the things a lot of people often misunderstand about an insurgency is that it is not about winning militarily; it is always about politics. The goal of the insurgents is to change the strategic thinking of their enemy.

What’s interesting about Ukraine is that the Ukrainians knew before the invasion that the greatest fear for the Russians was to face an ongoing, long-term insurgency. So that’s been part of their strategy all along, to send the message: you know what, if you come here, you’ll be here for a long time, and it’s going to be very painful. Think twice.

Q: It’s hard to imagine the Russians didn’t consider an insurgency. In fact, President Joe Biden warned back in December that the U.S. would support an insurgency if Russia occupied Ukraine. So what was Putin thinking?

A: I think he just made errors in calculation. First, he really underestimated the Ukrainian military. He really thought Russia would do a blitzkrieg and it would be over. He was like the Borg in Star Trek, saying: You will be assimilated; resistance is futile. That was the first miscalculation.

The second miscalculation was he underestimated the west’s ability to unite in its actions against Russia. Again, Russia is an autocratic country so decision making happens with Putin and his close buddies. Errors of calculus become more likely when there are fewer people involved in thinking through an issue.

Q: Do you think Putin will realize his mistake and de-escalate?

A: It is possible. I mean, you never know but the European Union has announced it is now seriously considering the membership of Ukraine, the exact opposite of what Putin wanted. If there is any reasonable discussion still happening in Russia, there must be a sense that things are not going well. From a strategic perspective, the Russians should be looking for ways to de-escalate. I hope this is the case because if this continues, it will be very costly for civilians.