At Michael Kovrig's trial, the world had Canada's back

Outside the courthouse in Beijing, a phalanx of foreign diplomats took a silent stand for the Canadian who faces almost certain conviction 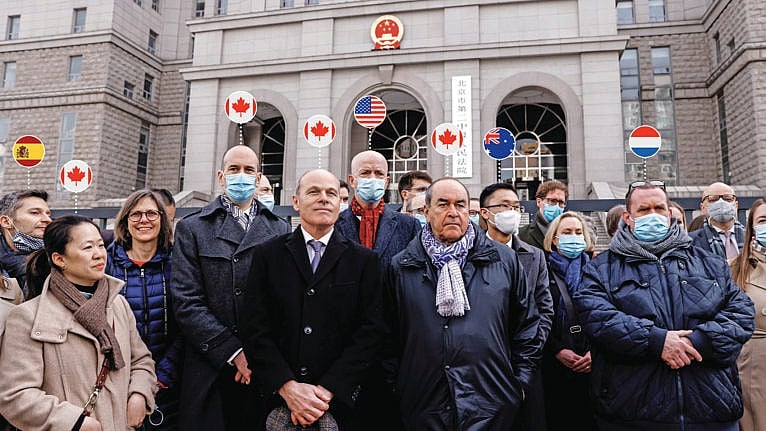 On March 22, a small army of diplomats stood in protest outside the courthouse in Beijing, China, where Michael Kovrig—one of the “two Michaels”—was being tried. Representatives came from the embassies of the United States, the United Kingdom, Australia, Austria, Belgium, the Czech Republic, Denmark, Estonia, the European Union, Finland, France, Germany, Ireland, Italy, Latvia, Lithuania, the Netherlands, New Zealand, Norway, Romania, Spain, Sweden and Switzerland. (Some are pictured here; many others were not caught on camera.)

It was a symbolic gesture. Everyone knew the trial wasn’t legitimate; nobody expected they’d be invited inside. China’s conviction rate is 99.9 per cent, and closed trials are common, especially for detained foreigners. Kevin Garratt, a Canadian who lived in China for 30 years before being arbitrarily detained and put on trial, told Maclean’s his trial involved three judges, two prosecutors, an interpreter, a camera operator and his attorney, with whom he wasn’t allowed to speak. “It was very confusing, what I could and couldn’t do,” Garratt said. “Mostly I couldn’t do anything.”

READ MORE: Inside the fight to bring the ‘two Michaels’ home

Nonetheless, Canada couldn’t let Kovrig—or Michael Spavor, tried days earlier—stand trial without a protest. That so many nations showed up was a promising, if muted, show of support. Some diplomats, standing outside the courthouse, refused to identify themselves or speak to the media.

“It was easy for them to show up,” says Guy Saint-Jacques, a former Canadian ambassador to China. In diplomacy, written statements are more powerful than silent protests. Besides, “we have to be realistic about how much international support we can rally,” he adds. “If countries are asked to choose between Canada and China, China is a lot more influential.”

Spain has been stubbornly neutral on China in several controversial areas and Spain’s largest telecom has invited Huawei to help build its 5G network—although it has regretted that decision in the last couple years. Luis Melgar Valero, the Spanish embassy’s first secretary, represented his country at Kovrig’s trial, though he and his embassy declined to comment for this story.

The U.K. has been an outspoken critic of China’s human rights abuses and a strong ally of Canada’s, joining Canada, the U.S. and the EU in laying down sanctions in March against Chinese officials responsible for Uighur persecution. “The U.K. stands with Canada,” Foreign Secretary Dominic Raab wrote on the day of Kovrig’s trial. “We call on China to respect the rule of law, uphold its international obligations, and allow consular access under the Vienna Convention.”

Christoph Carpenter, a Swiss political counsellor, showed up for Kovrig’s trial, though he isn’t visible in the above image. In March, Switzerland unveiled its first foreign policy strategy dedicated to dealing with China, a businesslike approach that focused on human rights and trade. The Swiss department of foreign affairs tweeted out a statement on the day of Kovrig’s trial that urged China to guarantee “fair and transparent trials.”

Germany actively supported democratic activists in Hong Kong and published a private request by the Chinese government to praise its handling of the coronavirus—a request that Germany ignored. Bärbel Kofler, the country’s commissioner for human rights policy and humanitarian assistance, has said of the two Michaels, “I believe that their detentions are arbitrary and that they should be released immediately.”

The U.S. has been vocal on the two Michaels. President Joe Biden and Secretary of State Antony Blinken have both said that “human beings are not bartering chips,” referring to the two Michaels’ detention as revenge for Canada arresting Huawei executive Meng Wanzhou. William Klein, the acting deputy chief of mission of the U.S. embassy in China, told reporters outside the Beijing courtroom that “the United States will treat these two individuals as if they were American citizens.”

The nation has demanded answers to the origins of COVID-19 and dismissed China’s aggressive claims to the South China Sea. Yet Australia has avoided loudly backing Canada on the two Michaels. In December 2018, Australian experts in Chinese affairs wrote to Foreign Minister Marise Payne, urging her to call for the Canadians’ release. In response, Payne said her government was “concerned” about the situation. An Australian political officer showed up to both Michaels’ trials, but the country’s high commission did not identify him to Maclean’s, instead emailing a statement calling for “transparent and fair” trials for the two Michaels.

Prime Minister Jacinda Ardern has shifted her government away from Chinese reliance after evidence came to light of Chinese Communist Party interference in political parties, universities and local governments. In a statement to Maclean’s, New Zealand said its presence outside Kovrig’s trial was “consistent with New Zealand’s strong interest in the principles at stake in this case.”

Two Dutch representatives showed up: Marcel van den Bogaard, head of the embassy’s political department, and Gabriella Ramdhan, the department’s second secretary. “We call on the authorities to ensure a fair and public hearing and to ensure their right to legal counsel and consular access,” Laura van Megen, a media and political policy officer at the embassy, told Maclean’s in an email. “We call upon the authorities to act in a fair, unbiased and transparent manner, in compliance with rule of law.”

This article appears in print in the May 2021 issue of Maclean’s magazine with the headline, “When the world had Canada’s back.” Subscribe to the monthly print magazine here.