Hong Kong protestors to democratic leaders: Stand up for us before it's too late

'Hong Kong is the foreshadow of what will happen to the western world,' warns one leading demonstrator. 'Whatever happens here is the first chapter' 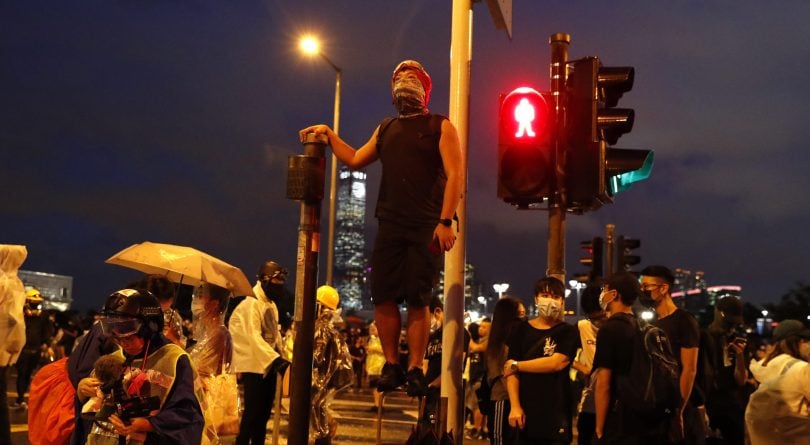 Protesters gather near government buildings in the Admiralty district of Hong Kong. Students promised to boycott the first day of term to add pressure to the government. (Jeon Heon-Kyun/CP/EPA)

Update, Sept. 4, 2019, 7:33 a.m. EDT: On Wednesday, Hong Kong Chief Executive Carrie Lam announced the formal withdrawal of the extradition bill that sparked the protests that have rocked the former British colony for 13 weeks. Key pro-democracy figure Joshua Wong said: “Too little and too late now … They have conceded nothing in fact, and a full-scale clampdown is on the way.” TG

Kacey Wong is one of Hong Kong’s most beloved and celebrated artists. He’s an award-winning sculptor, visual artist, lecturer and creator of provocative works of performance art. For several years, he’s been a leading figure in what you could call Hong Kong’s impeccably non-violent democratic cultural resistance. But Wong says he’s fed up with the complaints he’s been hearing from the world’s liberal democracies about the violence that has lately emerged at the front lines of the most dramatic popular unrest since the semi-autonomous former British colony was ceded to Beijing in 1997.

“These people who are complaining about the violence, they have no idea,” Wong told me by telephone from Hong Kong this week. “They have no idea about when to use force and how much force to use. What you are seeing with the young people, they are practising uncivil disobedience with high discipline. They have nothing to lose. Already they can’t afford housing, already there is no freedom, already life is not worth living. You can get arrested for anything now. They see that the law is already unjust, so they mask up, and they say ‘don’t get caught, do the right thing,’ and it is quite an advanced practice. It is more like a sentiment of ‘liberty or death’.”

Now in its 13th week, Hong Kong’s tumult took a dramatic turn last Friday after several prominent activists and lawmakers were rounded up and charged with a variety of offences, including incitement to riot and obstruction, and the Hong Kong Police Force banned a mass protest that was planned by the Civil Human Rights Front for Saturday.

Throughout the weekend, tens of thousands of angry people marched in a series of unauthorized protests. The malls, the train stations, the parks and the approaches to Hong Kong International Airport were scenes of pitched battles between police and young radicals. For the first time, police deployed water cannon, having dyed the water blue to assist police in tracking people fleeing the confrontations. Molotov cocktails were thrown at police barriers. Riot squads poured into the Metro stations, and truncheon-wielding police were captured on cell phone cameras engaged in vicious acts of brutality. This was particularly so at the Prince Edward Station in the Mong Kok district of Kowloon, where baton-flailing police targeted protesters, neighbourhood residents and regular transit users alike, while medics were refused entry and ambulances waited outside.

“What we’re seeing is uncontrolled use of force by the police,” Wong told me. “We’re seeing real brutality. And the hatred, the real hatred of the police is there now. There are mass arrests, and the abuse of police power, and in this process people will probably get killed. We are going down in a spiral. It’s like sitting on a time bomb, waiting for people to die. Some of the protesters are already writing their wills, but instead of killing themselves, they go out and fight. This is the shared ideal among the hardcore people on the front line. It is not nihilism. It is about a citizen’s right and responsibility to do the right thing.”

The recent protests began in early June in response to an extradition law that would have incorporated the Hong Kong Special Administrative Region into the judicial system of the People’s Republic of China, where dissent is criminalized and the courts boast a 99 per cent conviction rate. While the bill was suspended in Hong Kong’s pseudo-democratic legislative council, Chief Executive Carrie Lam refused to withdraw it completely, and the protest demands were expanded to include amnesty for arrested protesters and a fulfillment of the promise in Hong Kong’s mini-constitution, the “Basic Law,” for universal suffrage—one person, one vote.

RELATED: Inside the fight for Hong Kong

Saturday’s rally was to mark the fifth anniversary of Beijing’s decision to renege on that promise—one of several dramatic encroachments on Hong Kong’s autonomy in recent years. Hong Kong’s semi-independent status was a key condition of the 1984 Sino-British declaration that led to the 1997 handover, but this summer, three weeks after the protests began, Beijing dismissed the declaration as an “historic document” with no practical force and effect.

Civil unrest continues this week. Tens of thousands of workers, university students and returning high school students staged strikes and gathered in rallies. While shocking incidents of police brutality are stiffening the resolve of the pro-democracy movement, Chinese propaganda videos are being broadcast showing dramatic anti-riot drills carried out by the Peoples Liberation Army across the border in Shenzhen.

Reinforcing the widespread view that Lam is a mere puppet of the Chinese Communist Party, the Reuters news agency obtained an audio recording in which Lam concedes that her refusal to meet protesters’ initial demands has caused “unforgivable havoc,” but that the matter is now out of her hands because Beijing has elevated the issue of Hong Kong’s turmoil to a matter of national security.

“It is impossible to know who is really making the decisions,” Yvonne Leung, a key leader of the 2014 Umbrella Movement protests for universal suffrage, told me. “The decision to arrest certain people last Friday, for instance, when all those leading figures were arrested by police, this couldn’t have been a decision by police by themselves. They would dare not do that without the authority of high ranking people.”

RELATED: When the democratic world turned its back on Hong Kong’s freedom fighters

It is not for nothing that this summer’s mass protest movement is leaderless. Four of the five young leaders who tried and failed to negotiate the 2014 Umbrella Movement’s demand to replace Hong Kong’s gerrymandered constituency system with genuine universal suffrage ended up in jail.

“There is no longer ‘one country, two systems’ for Hong Kong,” Yvonne Leung told me. “The insides of the system are rotten.” 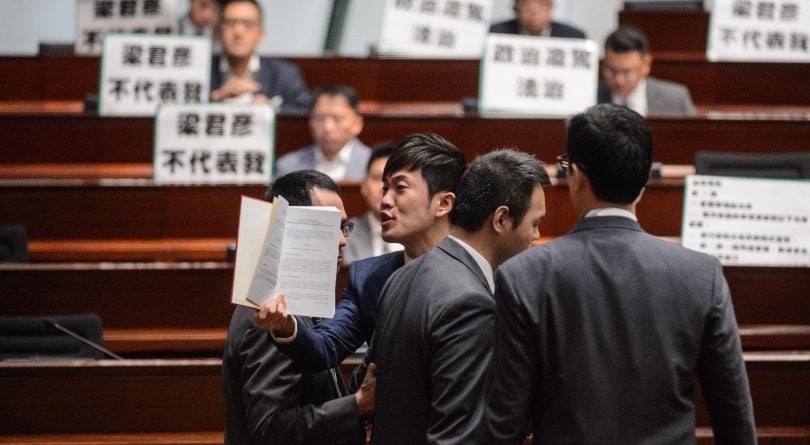 The political situation in Hong Kong is now intractable, with neither side willing or able to back down from their respective positions. Even so, it is unlikely that popular fears of a repeat of the 1989 Tiananmen massacres will be realized, Leung said. For one thing, it won’t be necessary. Beijing has already insinuated itself so deeply into Hong Kong’s affairs that more “elegant” means of repression, or at least something not as barbaric as Tiananmen, will likely be viable, she said.

The key to a resolution of the Hong Kong crisis is in the hands of the world’s liberal democracies, like Canada, Australia, the European Union, and perhaps even Donald Trump’s America, Leung said. “It is really important for these countries not to take the threats from China. Civil societies in liberal democracy countries are doing a much better job for us than their governments. It is very important for those citizens to make their governments take a very hard line.”

At the very least, citizens’ groups, universities and business groups should refuse to engage at any level with delegations from Chinese embassies and consulates. “They could boycott government officials, and don’t invite them as guests. This is something that could be very easily done. It is the very least you could do for Hong Kong people.”

“How to stop this repression, it will not be the voices of Hong Kong people. It will be the voices outside Hong Kong, the leaders of foreign countries. It will happen when the problem becomes immediate and real,” Wong told me. “Right now we are trying to escalate everything to the foreign affairs level. It is only through that, in my mind, that we have a slight chance.”

And Hong Kong’s democratic spirit will not spread to other Chinese cities, at least not unless and until liberal democracies put their avowed ideals about human rights and the rule of law ahead of the narrow interests of western corporations that have enriched the Communist Party elites. China will not democratize until the Chinese economy begins to implode.

“Freedom will not spread to China. It will be the other way around. I see the oppression of freedom and liberty spreading throughout planet earth,” Wong said. With Chinese corporate and state interests increasingly entrenched in western democracies, and democratic politicians increasingly compromised by their own countries’ integration with the Chinese economy, “Hong Kong is the foreshadow of what will happen to the western world that you know. Whatever happens here is like the first chapter of the rest to come.”