In Afghanistan, the signs of our failure were everywhere

Paul Wells: How did the West get things so terribly wrong? 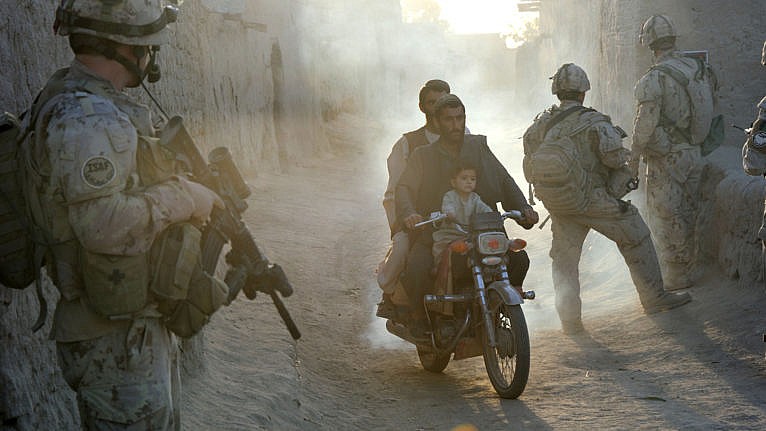 Passing through an early morning checkpoint in Kandahar in 2011, the year Canadian soldiers were brought home (Courtesy of Sergeant Matthew McGregor/DND-MDN)

So Joe Biden announced that the last American troops would leave Afghanistan, and before they could even finish leaving, the entire country had fallen to a resurgent Taliban. Some people said Biden was wrong to end the deployment. Some said Americans, and the rest of us, were wrong to be there in the first place. But it’s easy to remember why the latest doomed war in Afghanistan began in 2001, and very hard to find an easy off-ramp after that.

My first trip to Afghanistan was at the end of 2007. It was an “opinion-leader tour.” A half-dozen people from NATO countries—an Italian journalist, an Estonian think-tanker, a Dutch military analyst and so on—spent a week in Kabul and Kandahar as guests of the military alliance. In theory we would see what was happening, or what our mostly British, Canadian and American escorts and protectors would show us. Then we would go home and lead opinion, somehow.

We flew from Brussels to Dubai and then on to Kabul. After dinner in Dubai, the retired British military officer and the guy from the American-funded think tank started working on their “What We Saw in Afghanistan” op-ed for the Financial Times. Neither had actually seen anything in Afghanistan yet. Something about the place always did seem to encourage more talking than listening.

READ: The last trip out of Afghanistan: ‘There is no way back. Taliban are outside.’

NATO’s International Security Assistance Force (ISAF) had spent 2006 pushing into southern Afghanistan, with Canada taking a lead role in the province of Kandahar. The Taliban, which had seemed on the ropes, pushed back. So did the surprisingly diverse array of other Afghans and visitors from nearby countries who saw an advantage in killing NATO members: warlords, crime bosses, factional grudge carriers and more. Canadian soldiers would say the shots and improvised bombs came from “Opposing Military Forces,” to capture the notion that there was no need to pass a test of ideological purity to be a mortal threat. Coalition deaths in 2006 were three times as high as they were in 2004, and would triple again by 2010.

Most of the members of my little group had visited Afghanistan a couple of years earlier, when the country was calmer. They had great difficulty understanding that things had taken a turn for the worse. Some complained about having to wear body armour. Others wished they could stroll into downtown Kabul without “babysitters.” On the way in from the airport, we’d driven around a crater that marked the spot where an armoured vehicle like ours had been blown straight upward by a homemade bomb. But some of my travelling companions were not in a mood to add two and two.

To be fair, any attempt to do the math led to increasingly discouraging results. Afghanistan was a mess on a scale beyond comprehension. A desperately poor country whose median age is under 20 had been occupied by successive waves of outsiders for longer than most Afghans had been alive. Millions of Afghans had learned rational lessons from watching armies come and go: allegiances must shift because circumstances would. Money or influence must be used while available because neither would last.

RELATED: A Canadian bottleneck in Kabul is endangering innocent lives

The 37-member Western coalition constantly told itself its tens of thousands of soldiers and civil servants were there only to assist the Afghan government. This was transparent fiction, beginning with the notion of an “Afghan government.” We’d walk into a cabinet minister’s office and there’d be a U.S. army officer, huge and wearing desert camo, standing in the background, saying nothing after he introduced himself. “I’m the minister’s advisor,” the soldier would say. If the human and strategic stakes hadn’t been so high, the result would have seemed like some epic satire of government inefficiency, the career-capping novel Franz Kafka never finished.

From 2001 to 2005, under a United Nations mandate, five Western countries had been in charge of reforming central institutions in Afghanistan. The British were supposed to shut down the opium and heroin trade. The Americans tried to build up an autonomous Afghan army. The Italians would get the courts running smoothly. The Japanese would disarm irregular militias. The Germans would train the police. By 2007 none of these tasks had been accomplished. Countries not named as leads on a file assumed their help wasn’t needed. Lead countries were suspicious of outside help. The Americans decided the Germans had done a lousy job training police, so they tried taking over; meanwhile the Afghan police, who didn’t get to sleep overnight in hardened military bases, were being slaughtered, dozens each week. Many used police checkpoints to shake down drivers at gunpoint; the trade became so lucrative that checkpoint-duty assignments were traded on a black market. You could get rich or die; might as well try at least to do a little of each.

MORE: Where do Canada’s political parties stand on wars like Afghanistan?

Judges made less money, sitting in well-lit rooms and deciding whether to send battle­hardened warlords to prisons so crowded they had to release as many inmates as they admitted. Sometimes, when they got out, prisoners would call the judge who sent them and say: “I’m out now and I know where you are.”

Then there was the army: factious, ill-equipped, their families likely to remain targets for years in ways NATO soldiers could hardly imagine. They were supposed to become progressively more independent, but if combat conditions ever got too wild they could always call for NATO reinforcements or an air strike. “We trained them to depend on us. For years,” a retired army officer said to me in August, after Kabul fell.

I returned to Afghanistan twice, in 2008 and 2010. I met so many good people working hard against overwhelming absurdity. In 2008 the Canadians announced they had begun attempting “white situational awareness,” which meant they had finally started, after seven years, trying to understand the larger number of Afghans who weren’t obviously trying to kill them. They were perhaps starting a little late.

All those tens of thousands of people were there because airplanes flew into skyscrapers in 2001, provoking such rage and fear that, for months afterward, “Let’s not send soldiers to Afghanistan” was not a tenable position in a democracy. Once they were there, when should they come home? When the Taliban was defeated but not destroyed? Or the year after? Or the year after that?

Stephen Harper astonished me by bringing Canada’s soldiers home in 2011. The last Germans and Italians came home this summer, the last Americans soon enough. Until next time, I’m tempted to say. They say the road to hell is paved with good intentions. I’ve been on that road, steering around the fresh crater.

This article appears in print in the October 2021 issue of Maclean’s magazine with the headline, “Travelling down the road to hell in Afghanistan.” Subscribe to the monthly print magazine here.