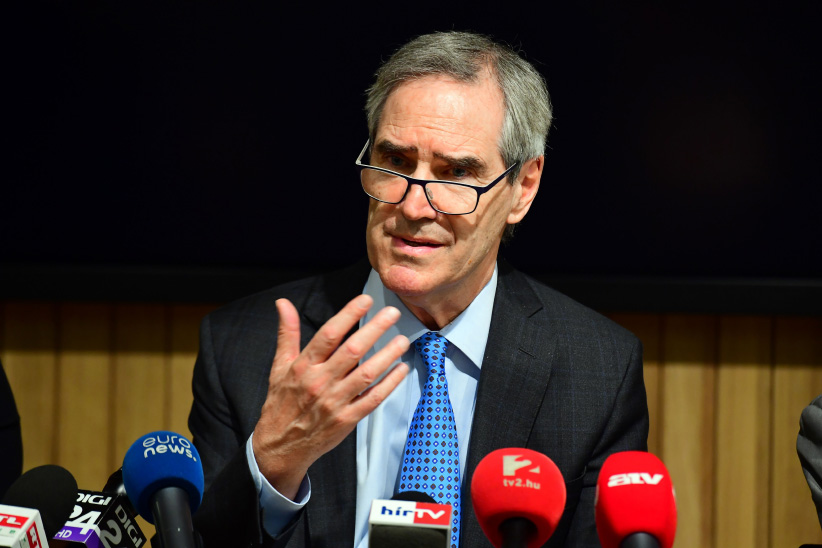 President and Rector of the Central European University (CEU) Michael Ignatieff speaks during a press conference in Budapest on March 29, 2017. The English-language CEU set up in Budapest by Hungarian born American businessman Georg Soros in 1991 after the fall of communism, has long been seen as a hostile bastion of liberalism by Prime Minister Viktor Orban’s right-wing government. (Attila Kisbenedek/AFP/Getty Images)

In its ongoing efforts to eliminate what it views as the unofficial opposition, including foreign-funded NGOs, the government of Hungary has proposed a series of amendments to its rules on national education. The changes, according to Central European University (CEU), would make it impossible for the university to continue as an institution of higher education in Hungary.

At a well-attended press conference on March 29, Michael Ignatieff, CEU president and Rector, said that the proposed legislation is “targeted” specifically at CEU, is “discriminatory,” and is “an assault on academic freedom in Hungary in general.” No stranger to tough situations, Ignatieff—the former leader of the Liberal Party of Canada and author of such books as Blood and Belonging, about ethnic pride turning into ethnic cleansing—is likely to be a tough opponent to prime minister Viktor Orban’s “illiberal democracy” as applied to the university he runs.

Orban’s examples of successful nations include Russia and China, neither of which is liberal. He considers civil society organizations that receive funding from abroad agents of foreign powers. That makes Human Rights Watch, Amnesty International and Transparency International suspect.

CEU has 200 academic staff, close to 1,500 students from 117 countries, including, of course, Hungary. It was founded 25 years ago by hedge-fund billionaire George Soros—a man Orban loves to hate—but it is a fully independent academic institution. Ignatieff is answerable only to CEU’s board of trustees whose membership includes distinguished academics (from Harvard, Columbia, Bard College), business leaders, George Pataki (the former Republican governor of the state of New York), a couple of high-ranking business people and Canada’s Chaviva Hosek, former president of the Canadian Institute of Advanced Research. Bard’s Leon Botstein is chairman; George Soros is only “honorary chairman.”

Soros established CEU as part of his overall strategy to promote “open societies” in the early days of the end of Communism in central Europe. Orban is a former recipient of a Soros-funded grant to study overseas. But times have changed. Orban now accuses Soros of meddling in Hungarian political life. As well, the ruling FIDESZ party has been committed to vociferously defending Hungary’s (and coincidentally) the European Union’s borders from migrants seeking a better life. Soros has been an outspoken supporter of refugees. Some FIDESZ members have referred to CEU as “the Soros university.”

“This university,” Ignatieff said, “has always been in full compliance of Hungarian law. We are scrupulous with our compliance. Any account to the contrary is defamatory.” He is outraged that “the government has not had the courtesy to consult us” before tabling new laws that, if enacted by parliament, would force CEU to change its name, have its professors from non-EU countries vetted when applying for work permits, and open a university in the United States by Feb. 15, 2018. This is clearly impossible, though the university is registered in the United States and is supported by the U.S. government.

“The University is an important success story in the U.S.-Hungarian relationship, and it enjoys strong bipartisan support in the U.S. government. The United States opposes any effort to compromise the operations or independence of the University,” chargé d’affaires David Kostelancik said in a statement.

Ignatieff, who is usually a very calm man, was visibly angry at the press event. “This is our home,” he said. “We have done nothing wrong. It seems to me that the government has failed to understand the contribution we have made.” He insisted that there could be no productive dialogue with the government until the legislation is withdrawn; trust has been broken. “I have no desire to raise the tension but I have no desire to back down.”

Having talked of the deleterious effect of the legislation if passed by parliament, Ignatieff announced: “We will never close this university. We have no other home than Budapest.”

Ignatieff is married to a Hungarian, and has spent many happy years in Hungary.

There will be a demonstration in support of CEU on Friday. And given widespread acknowledgement—even by some FIDESZ party members, on condition of anonymity—of the value of CEU’s commitment to higher education, it is likely to be well attended.

Academics from other Hungarian universities have expressed support, as has the European Commission’s Frans Timmermans, and the mayor of Vilnius offered to provide a home for CEU if the Hungarian government does not back down. All in all, Orban may have a hard time realizing his plans.