Mining for the truth in Guatemala 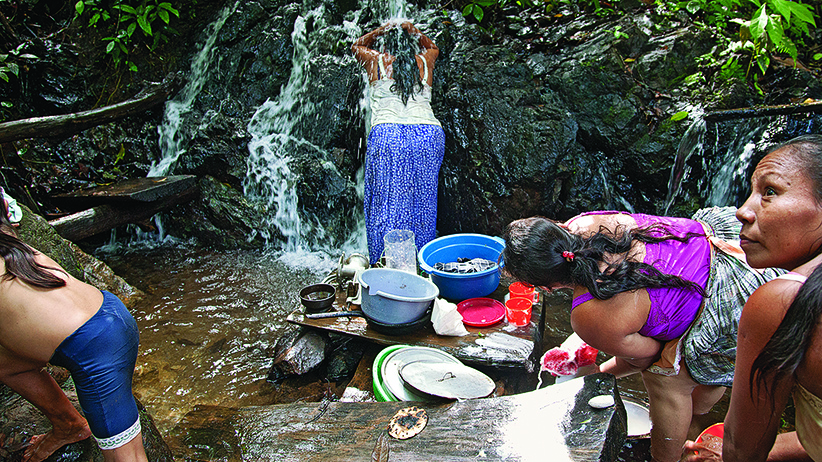 Rosa Elbira Coc Ich was warming tortillas when the men came. Their trucks rumbled down the dirt road toward her home, a shack she’d rebuilt in eastern Guatemala after a forced eviction 12 days earlier. It was Jan. 17, 2007, and as hundreds of police, military and private security workers returned, she heard their voices pierce the thick tropical brush as they called out for the leaders of the community.

Nine of the men pushed their way into her home.

“Where’s your husband?” a policeman asked, pressing a gun to her temple, according to documents filed as part of a lawsuit in an Ontario court. When she couldn’t answer, the officer said he was going to kill her. Then the men pushed her to the floor, ripped off her clothes and covered her mouth. Ich claims all nine of them raped her.

Nearby 10 other women from the Mayan Q’eqchi’ community say they experienced the same ordeal—gang rapes at the hands of police, military and private security from the Fenix nickel mine, 300 km northeast of Guatemala City—during evictions from the homes they’d built on the mine’s property.

These and other allegations, including the murder of a community leader and the shooting of another local man, are contained in three lawsuits filed in 2010 against Toronto-based Hudbay Minerals Inc., which owned the mine through a subsidiary from 2008 to 2011. None of the allegations have been proven in court; the company, which filed its defence last month, denies the allegations.

The simple fact the case has made it this far has already raised the stakes for Canadian companies operating abroad. Last year, when Superior Court of Ontario Justice Carole Brown ruled the three cases would be tried in Ontario, human rights activists hailed it as a landmark decision because it opened the door to further lawsuits against Canadian companies over their conduct—or that of their subsidiaries—outside the country. Just last month, another lawsuit was filed against another Canadian company related to a different Guatemalan mining project. In that case, seven plaintiffs filed suit in a Vancouver court against Tahoe Resources over alleged shootings at Tahoe’s Escobal Mine. 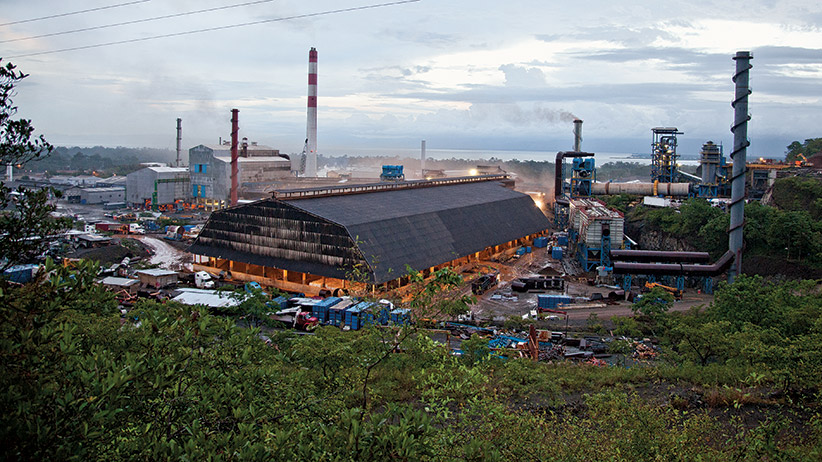 Nickel processing plant for the controversial Fenix mine project. (Photo by Roger LeMoyne)

It’s a sign, lawyers say, that Canadian courts are growing more comfortable exercising their jurisdiction in matters involving Canadian corporate activities abroad. For an industry like mining, and for Canada, where three-quarters of all the world’s mining and exploration companies are headquartered, the implications could be particularly profound. A case like Hudbay “had never been done because there was no obvious mechanism for it,” says Ralph Cuervo-Lorens, a lawyer with Blaney McMurtry in Toronto, who is not involved with the lawsuit. “The law has fallen behind and is now playing catch-up.”

The lawsuit related to the alleged gang rapes dates back to long-standing land disputes that erupted in early 2007. At the time, Vancouver-based Skye Resources owned and operated the Fenix mine, which was run by its Guatemalan subsidiary, Compañía Guatemalteca de Níquel (CGN). When a group of farmers set up homes and planted crops on small parcels of land owned by the company, CGN ordered an initial round of evictions. When the community returned, CGN ordered a second eviction, which the villagers say turned violent. The other two cases before the courts in Ontario stem from shootings in 2009 that left activist Adolpho Ich dead and a man named German Chub paralyzed. A criminal investigation into those shootings is under way in Guatemala.

Hudbay acquired Skye, along with its legal liabilities, in 2008. It later sold CGN to Russia’s Solway Group in 2011, and, as part of the agreement for that deal, Hudbay retained responsibility for defending the lawsuits. The plaintiffs did not pursue a lawsuit in Guatemala, however, turning instead to Canada, which has a stronger legal system and may be more likely to award higher damages. 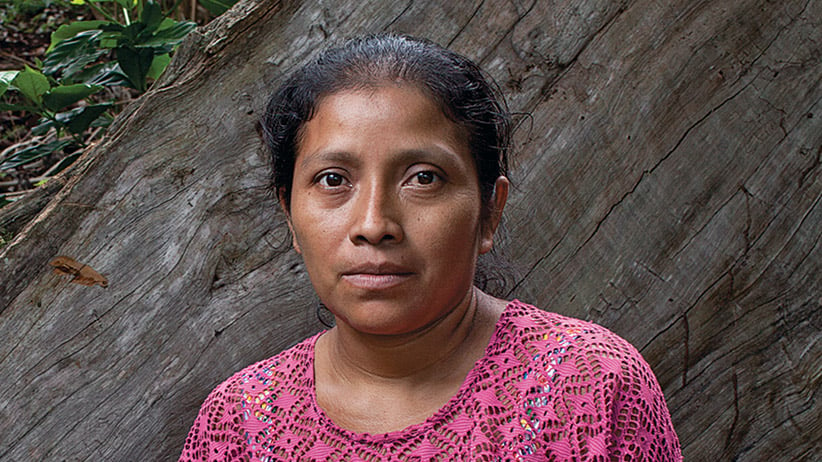 An indigenous Mayan woman near the Fenix mine project in Guatamala was forcibly removed from her first settlement in Lote Ocho. (Photo: Roger LeMoyne)

Documents filed by Hudbay in May give a taste of what’s to come in a trial that lawyers for both sides admit won’t begin for another two to five years. In its statement of defence, the company describes an uprising where a mob “wielded machetes and threw rocks and Molotov cocktails” before stealing AK-47s, firebombing a police vehicle and shooting at private security, who “feared for their lives.” Given the context, Hudbay believes CGN’s security forces acted “appropriately and with restraint in some very volatile situations and they did not carry out the acts alleged in the litigation,” says Scott Brubacher, Hudbay’s director of communications.

As for the 2013 court decision allowing the case to go ahead in Ontario, Hudbay’s lawyer, Bob Harrison at the law firm Fasken Martineau, says the company chose not to appeal the ruling because, after cross-examining the witnesses in Toronto, Hudbay believed it would prevail in court. “Hudbay consented to having it tried here. So that’s the end of that issue . . . We’ll just see what a judge does with this case when it’s tried.”

Win or lose, however, the three lawsuits have already accomplished what opposition legislators in Canada have already tried and failed to do in the past: exert a measure of control over Canada’s many mining interests in developing countries. In 2009, Liberal MP John McKay’s private member’s bill, C-300—which would have compelled miners to strengthen their environmental and human rights standards when operating in developing countries—was narrowly defeated in the House.

“I’m not so naïve as to think that these mining companies aren’t operating in difficult circumstances,” says McKay. If the allegations are proven, he says, it will send a message that “you can’t use your security service as, in effect, a paramilitary organization that terrorizes the local population. If that’s the only way in which you can operate a business, then you probably shouldn’t be doing business there.”

On the ground in Guatemala: Observations from photojournalist Roger LeMoyne 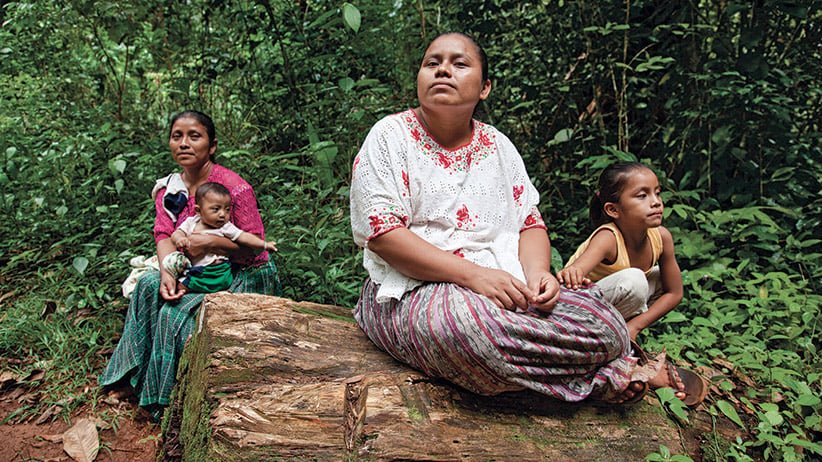 Rosa Eblira Coc Inh, one of the plaintiffs. (Photo by Roger LeMoyne)

The impromptu meeting in the wood shack went on for a long time, a dozen or so men and women mulling over their situation, back and forth in the Mayan language of Q’eqchi’. Thin yellow dogs lay on the earth floor, a baby slept in a blanket suspended from the roof, and Margarita Coc Icaal swung thoughtfully in a hammock like a pendulum marking time. She had heard from insiders that the company was planning to set up camp at the first Lote Ocho settlement, the one that was destroyed during the evictions seven years ago, in 2007. They worried they would be evicted from their jungle homes once again.

I was wishing, as all photojournalists do, to be invisible. The Q’eqchi’ had welcomed me—and my constant photographing—despite my being Canadian, like the company they hold responsible for their evictions and alleged rapes. But this meeting in the half-light of a rainy afternoon felt intimate, my camera, intrusive.

These people before me share the features of their Mayan ancestors: the long, sloping nose; full, bowed lips; dark almond eyes. There is an aura of nobility about them, despite their diminutive stature, constant poverty and lowly status in Guatemala. There is also a vulnerability: the lack of schooling and limited exposure to the wider world, the precarious life of subsistence farming, a guileless quality that is both touching and unsettling. While tortillas baked on an open fire, the small group discussed the latest twist in its legal battle with a transnational corporate titan. 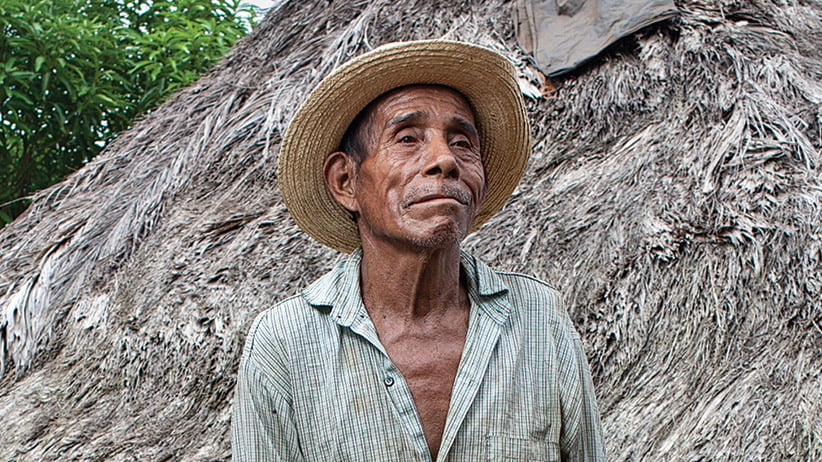 An indigenous Mayan man near the Fenix mine project in Guatamala was forcibly removed from his first settlement in Lote Ocho. (Photo by Roger LeMoyne)

Although Guatemala sells itself to tourists with the catchy line “Corazon del Mundo Maya” (the heart of the Mayan world), the indigenous people of Guatemala have been decimated since the day the conquistadors landed on their shores. A 1999 United Nations report asserts they were victims of genocide at the hands of the military dictatorship of the 1980s. In this decade, their foes are more often oligarchs and large corporations.

As with many other communities in Guatemala, the indigenous people around El Estor refused to recognize the legitimacy of foreign mining companies on what they consider their ancestral lands. They built homes in Lote Ocho. According to lawsuits they filed against Toronto-based Hudbay Minerals Inc. in an Ontario court in 2010, a small army of policemen, soldiers and private security personnel from the mine—armed with shotguns and other weapons—descended on the settlement in January 2007, destroying some 100 homes and evicting the people there.

After seeing a report about four of the plaintiffs travelling to Toronto for cross-examination by Hudbay lawyers in 2012, I felt the need to follow up on this story. With the help of Rights Action, an NGO working with the Q’eqchi’, I arranged an introduction to this reclusive community. In May, I trekked along a muddy jungle path to Lote Ocho to photograph and interview six of the women plaintiffs and other key members of the community.

It took the women almost two years before they dared to come forth with their story. The decision was made as a community, the support of the men was crucial, and Mayan spirituality was part of the process. 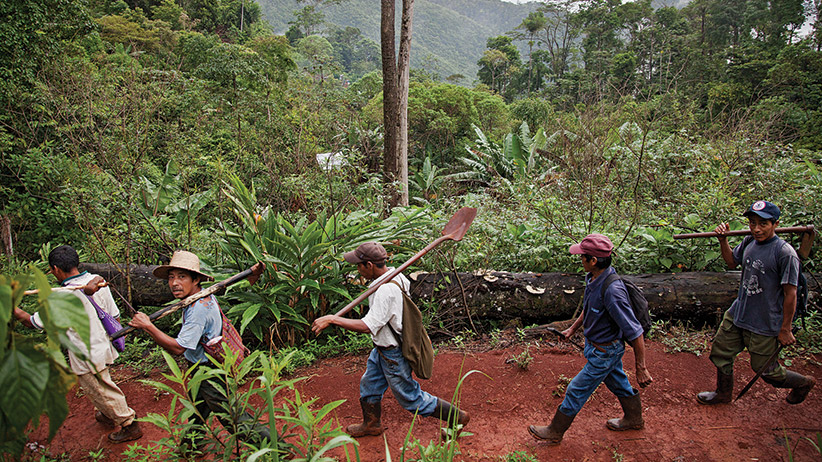 A group of indigenous Mayan men near the Fenix mine project in Guatamala who were forcibly removed from their first settlement in Lote Ocho. (Photo by Roger LeMoyne)

After several days making the images you see here, I hiked out past the site of the 2007 evictions, now an open, grassy area with a single structure of two-by-fours and a tin roof, a bare-bones community centre. From it, there is a magnificent view of a valley below—flat, green farmland that belongs to wealthy Guatemalans and, in the distance, the glinting mirror of Lake Izabal. I scrambled down the mountain along a rocky stream bed, working hard to keep up with a barefoot Q’eqchi’ boy. Reaching the road in the valley below, a car met me for the trip back. We passed the massive nickel-processing plant for the Fenix project, now a hive of activity, trucks streaming in and out, smoke belching from some of the several lofty stacks. The mine is back in production. Markets are bullish for nickel these days.

In early June, a dozen armed security personnel from the mining company, now owned by Russia’s Solway Group, installed themselves at the community centre. It looked, ominously, like the beginning of the occupation that Margarita had brought news of a few weeks earlier.

Roger LeMoyne’s photography and reporting for this story was made possible through the support of the Michener-Deacon Fellowship.