Inside the world’s oldest gem market in Pakistan, home to terrorist financiers and drug smugglers 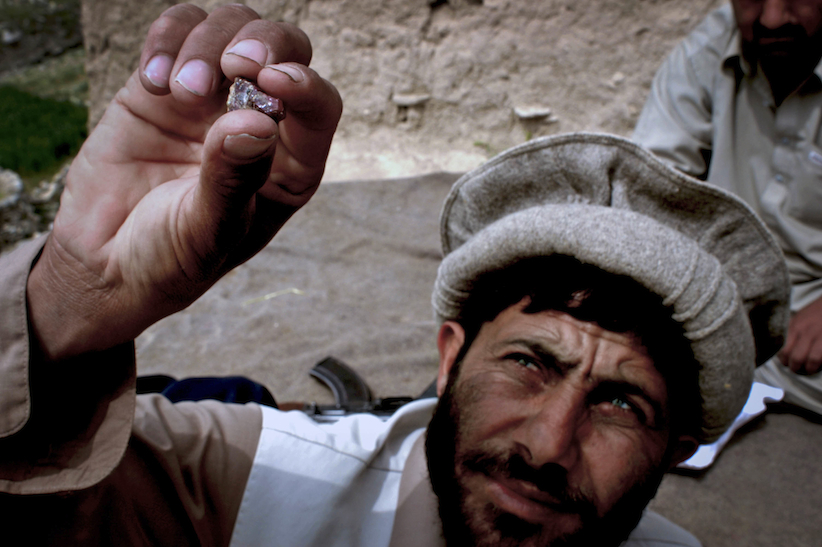 A miner at the ruby mines in Jegdalek, Afghanistan examines a ruby specimen extracted from one of top producing mines. (Photo: Adnan R. Khan)

“Twenty-thousand dollars.” That’s how much Jalil says the blood-red ruby he is holding is worth. “It’s not my best,” says the 47-year-old gem trader. “My best pieces I only show to people holding a bag of cash.” A hush descends over the small group of men huddled around a lamp in Jalil’s shop. The ruby, three near-flawless carats, glimmers with a surreal clarity. Other gemstones lie scattered on crisp white sheets of paper—sapphires from Kashmir, emeralds from Afghanistan’s Panjshir Valley, citrine and aquamarine—making the dark, windowless office feel like a cave of treasures.

The ruby is the true prize, mined in the remote mountains of Afghanistan and transported by smugglers over the treacherous Khyber Pass to Namak Mandi, home to one of the world’s oldest gem markets, in Peshawar. It is stones like these that can transform a pauper into a prince, or fund a war.

Jalil (who spoke on the condition his real name not be used) does not consider himself a prince, though other gem traders in Namak Mandi question how a man who only months earlier was struggling to survive can now show off gems worth tens of thousands of dollars. “He’ll do business with anyone who walks through his door,” one rival says. Jalil shrugs off the rumours. “I am a businessman. I buy a good and then I sell it,” he says, counting out the wad of U.S. dollars he’s just acquired. In recent years, Namak Mandi’s bustling trade has suffered in the face of a relentless war and instability, he adds. Legitimate buyers have disappeared. Today, they have been replaced by money launderers, drug smugglers and terrorist financiers.

The ruby Jalil just sold originated at the mines in Sappar, Afghanistan, a centuries-old mining village now controlled by the Taliban. On a visit there last year, local miners said the militants take a 10 per cent cut from all the gems they extract. “Protection money,” they said, adding that it’s likely some of that money helps local Taliban commanders purchase weapons, ammunition, or other supplies. In Peshawar, those stones are often bought with drug money, converting a large amount of cash into easily transportable gemstones; terrorist financiers use the stones to fund groups both in and outside of Pakistan.

Transactions like the one in Jalil’s shop have become a source of concern for money-laundering and terrorist-financing experts around the world. The Financial Action Task Force (FATF), an intergovernmental body set up in 1989 to combat threats to the international financial system, has warned of the growing problem of “trade-based money laundering” in terrorist financing. Pakistan has been identified as a hot spot.

Jalil shows just how the easy the process can be. He doesn’t ask the buyer his name or document the transaction. After counting out the money a second time, he rolls it up and stuffs it into a white plastic bag, depositing it in the back of his safe. “All my business is done in cash,” he says smiling.

It’s difficult to calculate how much hard currency is changing hands on any given day in Namak Mandi, but likely it is millions of dollars. According to the Pakistan Gems and Jewellery Development Company’s official figures, Pakistani gem exports from July 2013 to January 2014 amounted to US$3.4 million. As for the undocumented trade, industry experts estimate its value to be as much as 100 times the official figure.

Peshawar’s gem trade is only part of a larger global trend. Authors of a 2004 report on money laundering in Canada, published by the Nathanson Centre on Transnational Human Rights, Crime and Security at York University’s Osgoode Hall, pointed out that gems “satisfy one of the essential prerequisites of money laundering: converting a cumbersome amount of cash to less suspicious, high value commodities. Jewellery, precious gems, gold and coins are also generally unencumbered by government regulation, are readily bought and sold through retail outlets, can be transported internationally, and are easily converted back into cash almost anywhere in the world.” 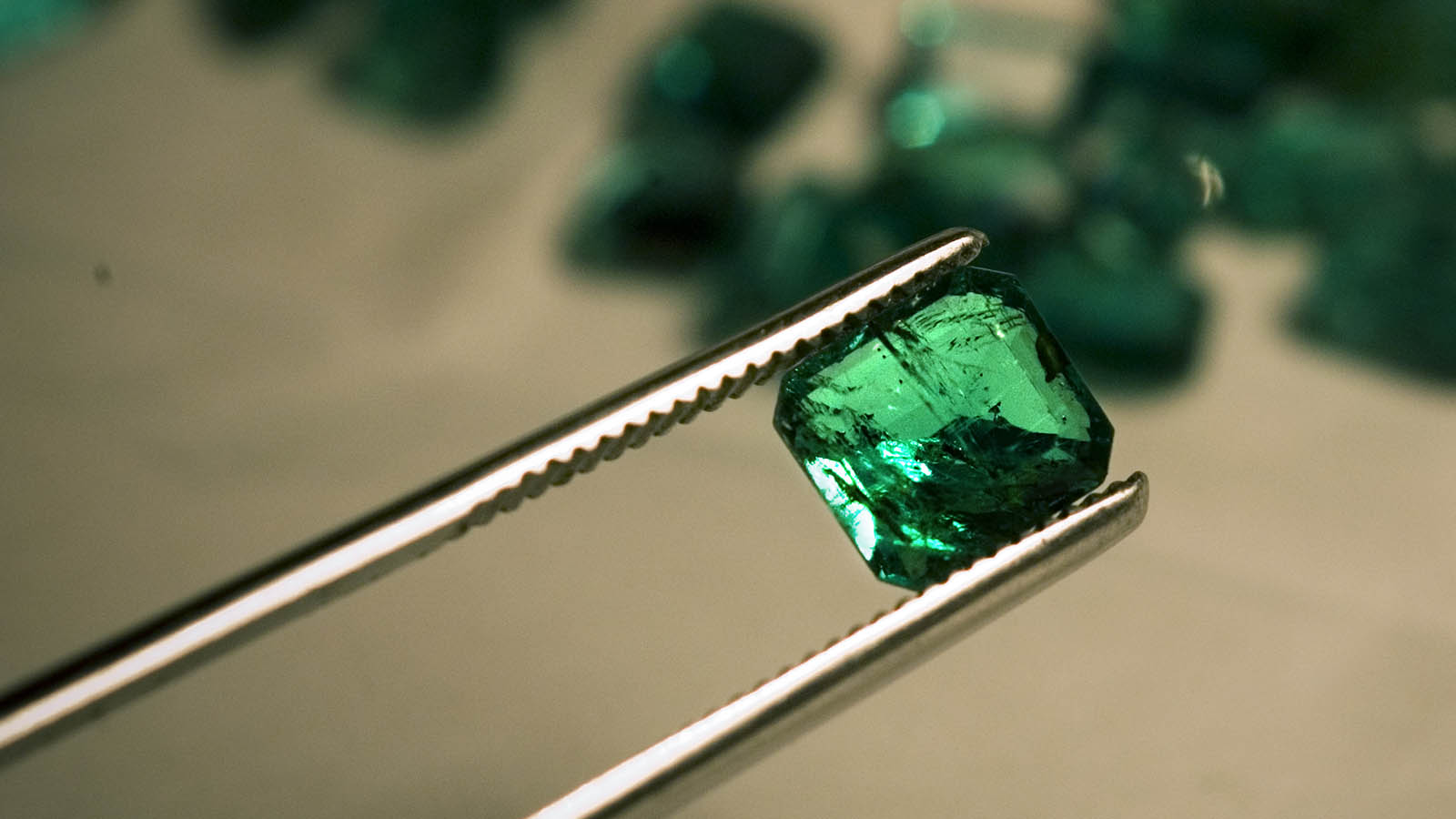 In Pakistan, soaring values have gone relatively unnoticed by financial regulators. “The gem trade is too small,” one investigator at the country’s ﬁnancial monitoring unit, Muneer Ahmad, told Maclean’s. “We have bigger issues.” On paper, at least, he’s right. Documented gem exports from Pakistan represent less than one half of one per cent of the $10-billion global trade in gemstones. It’s the informal trade that is the problem. In a largely informal economy like Pakistan’s, currently experiencing rapid growth, it’s a wonderland for criminals.

While Pakistani officials have turned a blind eye to the undocumented trade in gemstones, global industry leaders have started to take notice. Unlike the diamond industry, which experienced its own ethical crisis in the late 1990s, coloured gemstones have, until very recently, escaped similar scrutiny. As gemstone values have increased, so have threats to the industry, says Alexandra R. Harrington, a Ph.D. candidate at McGill University and author of a 2009 paper outlining a possible verification regime for gemstones.

Her proposal modelled itself on the Kimberley Process, the global standard set up to try and stem the flow of African conflict diamonds. “The diamond industry is much more organized,” says Harrington. “So diamonds are easier to trace. The gemstone industry, on the other hand, is still very fragmented.”

The mining and trading of coloured gems forms a vast network of largely small-scale miners and traders in 47 different countries, 90 per cent of which are in the developing world. A ruby sold as a pendant in New York may have changed hands half a dozen times since it was mined, cut and set, without documentation. “It’s very difficult to determine the origin of a coloured gemstone,” Harrington adds. “You’d need very sophisticated equipment.”

Harrington suggested a coordinated international effort to force governments into regulating and documenting the trade. In April 2013, the International Colored Gemstone Association (ICA) announced that it had begun working with the United Nations on developing a framework to do just that. The results so far have been far from stellar.

“We don’t have this grandiose idea that we can change things,” says Nick Houghton, CEO of True North Gems, based in Vancouver. “Criminals will always ﬁnd a way around obstacles. But the more obstacles we place in their way, the less attractive our industry becomes for them.” Houghton is currently developing the gemstone industry’s first tracking program, with UN and ICA support, using his company’s ruby operation in Greenland as a model. It’s still a far way from tackling the troubles in Afghanistan and Pakistan. 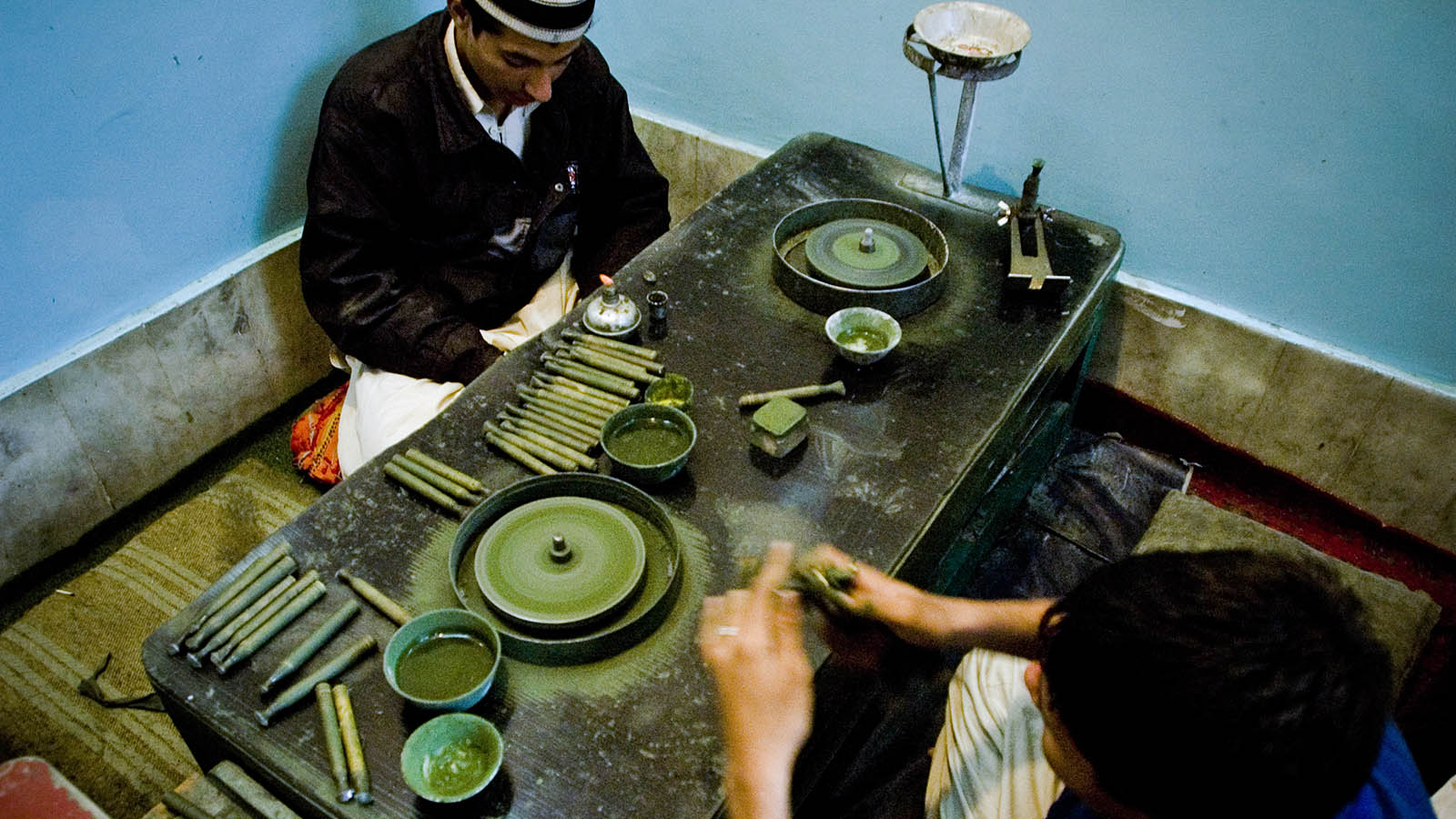 Afghan authorities have tried to stem the outflow of their mineral wealth—an estimated US$3 trillion, according to the latest figures provided by the Afghanistan Geological Survey—but with little success. The border crossing into Pakistan at Torkham is infamously porous. A network of footpaths through the mountains offer an abundance of clandestine routes around the official crossing, while guards at the crossing itself, both Afghan and Pakistani, rarely turn down a bribe.

Afghan authorities complain that Pakistan maintains a see-no-evil policy to the trafficking in raw stones, happy to reap the economic benefits of value-added processes like cutting and jewellery production. It is a legitimate complaint, but Afghanistan’s resource-processing sector remains undeveloped outside of some small-scale initiatives. For bulk trade, Afghan miners must still send their stones elsewhere for cutting and setting. Peshawar, because of its proximity and the historical significance of the gem trade, is the natural beneficiary.

From there, anything can happen. “A lot of Afghan emeralds are still smuggled into Colombia from Pakistan,” says Houghton. “Then they are moved out as Colombian emeralds, increasing their value on the world market.”

Reputation matters in the gemstone trade. Unlike diamonds, which have a set value based on quality, a gemstone’s source changes its price. Burmese rubies have a reputation for high quality. Owning one is more prestigious than owning an Afghan ruby, even if technically they are of equal quality. Ruby traders in Namak Mandi say they often send their best stones to trading hubs like Bangkok and sell them as Burmese rubies.

In the process, their histories are erased. An emerald mined by a warlord in northern Afghanistan could be sold to a drug baron who then sells it to a trader in Peshawar who transports it to Colombia, where it is mixed with Colombian emeralds and enters the global market. A person in Canada buying an emerald pendant from a jeweller would never know the emerald was used to buy weapons for a warlord’s militia or launder money for an Afghan drug lord.

For traders in Peshawar willing to play the game, trafficking gemstones means huge payoffs. “You can tell when someone is holding dirty money,” says Jalil. “First off, he probably doesn’t know much about gems. He’ll ask for only a few of the highest quality pieces. He’s desperate, so it’s easy to take advantage. I can sell a piece worth $20,000 for $30,000. The buyer doesn’t care. If he has dirty money, that’s the cost of cleaning it. Then he can fly to Europe to sell the gem. No airport scanner is going to pick up a ruby.”

Another Afghan trader, Khyber Jan, says there are no rules in Namak Mandi. Local sellers will gladly undervalue a shipment of gems intended for export, a common technique used by trade-based money launderers. “The buyer asks us to bring the value down on paper,” he says. “I assume it’s to avoid import duties. I’ve put one-tenth of the actual value on shipments. What do these customs officers know about gems anyway? If they ask, you can say a ruby is spinel, or tourmaline or even a piece of coloured glass.”

Kamal ud Din, the former president of the Pakistan Gems and Minerals Association, argues that playing the game has become a necessity for traders suffering from a market in decline. “Our industry is in crisis,” he says, surrounded by pictures of Pakistan’s mineral riches at his office in Namak Mandi. “War and displacement have completely changed this market. People are desperate, and desperate people will do anything to survive.”