Religious freedom is under assault. Will Canada be its champion?

The world stands by as Pakistan’s blasphemy laws claim lives and incite violence, opening the door to similar abuse around the world 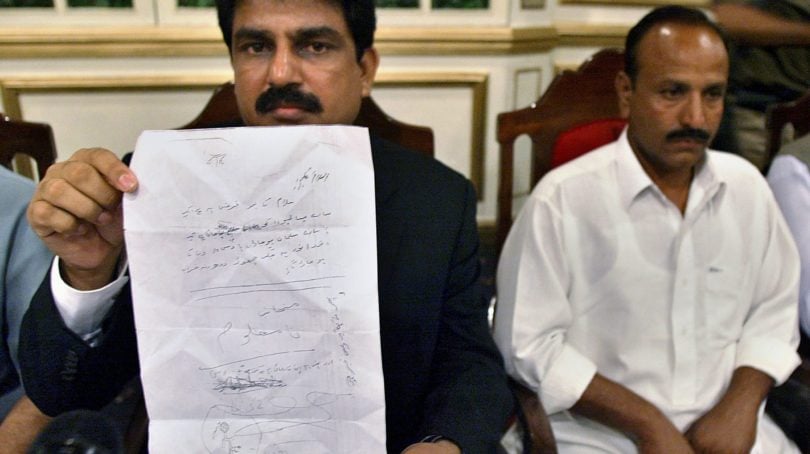 Shahbaz Bhatti, left, is seen in 2007 holding a threatening letter a Christian received in a pro-Taliban town where Pakistani Christians were ordered to convert to Islam (Anjum Naveed/AP)

Monday was a fairly uneventful day for Peter Bhatti, the 60-year-old president of International Christian Voice, a non-denominational organization based in Brampton, Ont. But it was a sad day, as March 2 has been, every year, for nine years. It was on March 2, 2011 that Peter’s younger brother Shahbaz was assassinated in Islamabad.

As Pakistan’s minister for minority affairs, Shahbaz Bhatti had drawn the ire of Islamist extremists for his outspoken advocacy on behalf of Pakistan’s persecuted Christians, Hindus and Sikhs, and the Hazara and Ahmadi Muslim minorities. Bhatti died from 22 gunshot wounds in an attack claimed by the Tareek-e-Taliban only six weeks after he’d visited Ottawa, where his activism served as an inspiration for the establishment of the Office of Religious Freedom.

The high-level diplomatic project was shuttered by former Foreign Affairs Minister Stephane Dion in March 2016. It was a move that Peter Bhatti says was shortsighted and ill-advised, especially now that religious liberty is under such brutal assault around the world.

RELATED: Can Pakistan control its extremists?

“You know, we are so lucky here in Canada. We have all kinds of freedom here,” Peter told me on Monday. “But if Canada is going to be a champion of human rights, we should be paying more attention to places where people have no religious liberty at all.”

China is engaged in a brutal campaign involving intensive surveillance and internment without trial in an all-out effort to eradicate the Muslim identity of the Uighur people of Xinjiang. Myanmar continues to evade responsibility for its enforced expulsion of nearly a million Rohingya Muslims from Rakhine state, bordering Bangladesh.

In Pakistan, the blasphemy law that Shahbaz Bhatti fought against not only remains on the books despite international condemnation. It is increasingly deployed to intimidate and persecute religious minorities and liberal intellectuals. Hundreds of people have been prosecuted under the law in recent years.

Shahbaz Bhatti had been particularly outspoken in the notorious case of Asia Bibi, the Christian farmworker who was convicted on a wholly contrived blasphemy charge and languished on death row for eight years before a high court overturned her conviction in November 2018. Several weeks before Bhatti’s murder, on Jan. 4, 2011, Punjab governor Salman Taseer was also assassinated for protesting the obvious miscarriage of justice in Asia Bibi’s case. Taseer was murdered by his own bodyguard.

The judicial reversal of Bibi’s conviction prompted riots across Pakistan. Bibi was placed in protective custody, and it wasn’t until last May that she arrived in Canada—two of her daughters had already relocated here. For the past 10 months, Bibi and her family have been living in Canada on temporary visas, at an undisclosed location and under assumed names for security reasons.

Last week, French President Emanuel Macron invited Bibi to apply for permanent asylum in France, where Bibi is currently promoting her memoir, co-authored by the French journalist Anne-Isabelle Tollet. Last Tuesday, she was presented a certificate of honorary citizenship from the mayor of Paris, Anne Hidalgo. “France is a symbol for me,” Bibi told reporters, adding that Canada’s harsh winters were also a factor in her consideration of France as her permanent home. Besides: [France] was the first country in the world to really support me, and the country from which my name became known.”

While Shahbaz Bhatti’s name has been nearly forgotten in official Canadian circles, his memory lives on among Pakistani minorities and progressive Muslims. Last Sunday, memorial masses in his name were held in Catholic churches across Pakistan. Several commemorations were underway in his honour this week, in the Bhatti family’s home village of Kushpur, and also in the capital, Islamabad. A celebration of Bhatti’s life was planned at the site of Bhatti’s murder in Islamabad, bringing together Muslim and Christian leaders, politicians, diplomats and representatives of the All-Pakistan Minorities Alliance, led by another of the five Bhatti brothers, Paul.

Peter Bhatti’s International Christian Voice (ICV) organization and its supporters will be gathering for a commemorative fundraising dinner in Woodbridge, Ont. on Friday. “But we are no longer mourning,” Peter said. “We are trying to carry on the work of my brother, to continue his legacy.”

A priority for ICV is the resettlement in Canada of Pakistani Christians who have fled to Thailand and are now at risk of arrest and deportation. While it’s easy for Pakistanis to travel to Thailand, the government in Bangkok doesn’t recognize them as genuine refugees. So they end up stuck in limbo in Thailand, and often end up imprisoned in what the ICV calls “intolerable and inhumane conditions” in Bangkok’s Immigration Detention Centre. Working with several churches, the ICV has managed to resettle several dozen Pakistani exiles from Thailand under the federal private-sponsorship program.

The ICV wants Global Affairs and the UN High Commissioner for Refugees to urge Thailand to stop arresting and incarcerating refugees for repatriation back to Pakistan. Ottawa should also pressure the Thai government to provide Pakistani refugees with temporary asylum, at least, the ICV says. The organization has also asked Ottawa to formally recognize Pakistani Christians as bona fide refugee claimants fleeing persecution, and also to expedite claims filed by families.

Meanwhile, back in Pakistan, the country’s three million Christians—whose heritage goes back to a late 16th century Jesuit mission during the reign of the Mughal emperor Akbar the Great—are increasingly singled out for spurious blasphemy prosecutions. Over the past 10 years, Christians have been subjected to several suicide bombings, pogroms, anti-Christian riots and the official demolition of Christian neighbourhoods. But it is the blasphemy law that allows extremists to engage the full force of the state most effectively against Christians and other minorities.

There are at least 25 Christians in prison on blasphemy convictions in Pakistan at the moment. Six are on death row. One of them, Shagufta Kausar, has been awaiting an appeal hearing, along with her husband Shafqat Emmanuel, ever since they were both sentenced to death in 2014.