Royal baby dispatches: 'It's a Prince!'

After a long day's wait, the big announcement finally comes

“It’s a Prince! It’s a Prince!” The crowd outside London’s St. Mary’s hospital—suddenly dominated by teenaged tourists—greeted news of the royal birth with cries and cheers.

“Please step aside. This is a working hospital!” crisply-dressed but bleary-eyed police officers pleaded, as the group surged forward, iPhones raised to the heavens and switched to camera mode.

The press release had arrived just moments before. I stood with another Canadian reporter, bent over his Twitter feed. “It’s a boy!” A healthy eight pounds, six ounces. As of yet, unnamed. As the crowd reacted, a car pulled up to the hospital’s Lindo Wing to collect the official proclamation.

It had been a long wait for the hundreds of journalists and enthusiasts gathered since the wee hours of the morning. The hospital Starbucks was due to close at 10 p.m., and reporters were getting testy. There had been several false alarms, which sent news crews rushing to curbside frontlines. There was also a real fire alarm, which nobody paid much attention to.

Particularly biting was the revelation that more than four hours had lapsed between the baby’s birth and Kensington Palace’s announcement. “They were probably waiting for the evening news,” one journalist mused. Indeed, the Royal Family spoon-fed us spectacle until the end.

“Have you ever seen The Lion King?” one man has asked me, earlier this afternoon. Evidently, he had an epic scene in mind: of Prince William arriving on the steps and lifting his royal newborn into the air.

Things proceeded somewhat differently. Shortly after the car bearing the announcement sped off to Buckingham Palace, the street grew dark. A ‘Royal Crier’ in period garb then appeared on the steps to ring his bell and read aloud from a script. Amidst the shouts, only bits and pieces were audible: “on this day…” But never mind; the masses roared each time he spoke. Many a Union Jack flag was waved.

Those in the biz like to say that no news is harder to bear than news. All day long, specious hypotheses were exchanged under a heavy sun. Bored photographers sat perched on their stepladders, reading fresh-off-the-press tabloids. TV producers spooned up towering caramel frappuccinos. We print journalists exchanged weary smiles.

For some time after the announcement, the crowd refused to disperse. What else would happen? When nothing much did, broadcast news producers circled the enclosure, encouraging groups of young tourists to ramp up the enthusiasm. “Are you excited?” they prodded.

Near the entrance to hospital, an American man with a chubby toddler on his shoulders was interviewed by a string of broadcasters. At a moment’s lull, the little boy leaned down to whisper something in his father’s ear. “It’s OK,” his Dad responded, soothingly. “ We don’t have to go on TV anymore.” 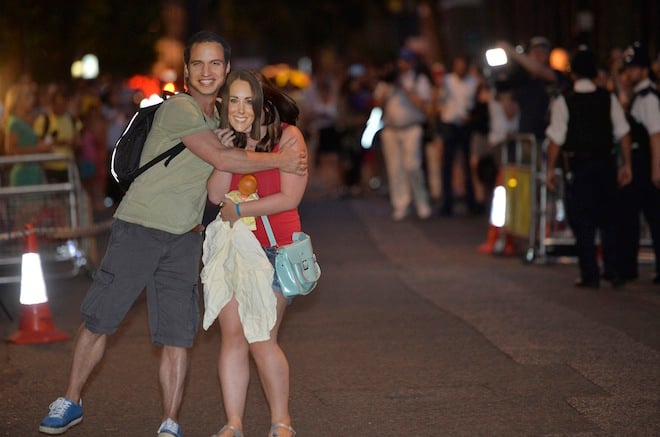