On the ground near the rescue operation, neighbours express support for the man who led 12 children underground 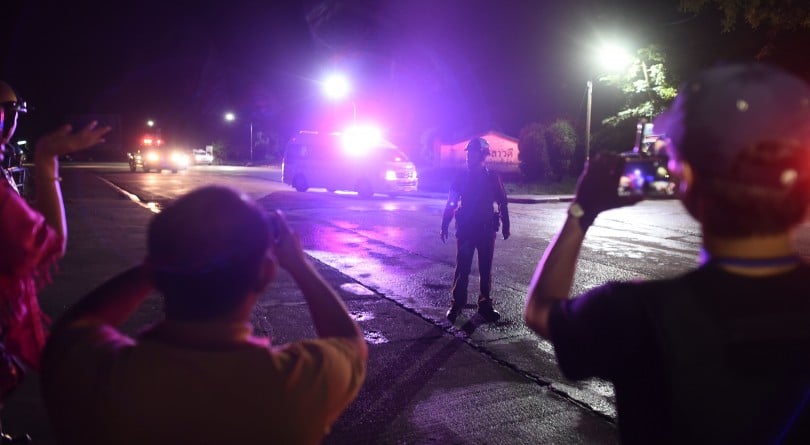 People watch as an ambulance with escort are seen leaving the military airport in Chiang Rai to a nearby hospital after taking passengers from a helicopter as divers evacuated some of the 12 boys and their coach trapped at Tham Luang cave. (Photo by Ye Aung Thu / AFP)

More than two weeks ago, the twenty-five-year-old assistant soccer coach crawled inside a cave in this remote part of northern Thailand with twelve children under his care; none of them could crawl out. The police didn’t initially eliminate the possibility of pressing charges against him if he survived. At the time of writing, one man has died trying to rescue them, and a nation lays in agony waiting for all the children to emerge from Tham Luang cave alive. There has been pain enough already, and there may be more pain yet to come. But for now, the hurt is not laced with blame.

Not half an hour from the cave, in the area of Koh Sai, residents say they love the boys; they love their neighbour too, the man who was supposed to protect his young charges. In every corner of Thailand, the country follows their lead.

On the right: Hom Suprakaru stands outside her convenience store stacked with plastic bins of candy, plastic flowers and portraits of the King. Her husband is a village elder who has been spending a lot of his days at the cave. She misses the kids who are trapped in it; they used to come in off the street and buy red licorice and Pocky sticks. But she misses their coach as well. When he was little he bought candy from her too from next door; now that he’s a grown man, the former monk never misses going to temple but still buys a lot of candy.

“It was an accident,” she says. Accidents happen. Sometimes people just die in them.

On the left: the same. A few chickens cluck behind Saipet Nam Non; a few more cook on the rickety metal grill she works in front of her squat home with a corrugated tin roof. She used to serve chicken to her nephew until he got stuck in the cave. She served it to his coach too, her next-door neighbour. She loved the man she knows as Ake then and loves him still. “He is smart man! Very good man!” she says. An accident.

At the mouth of the cave, volunteers have spent days picked up garbage, translating press releases, and sorting rubber boots and ponchos. They have all been trying to save the children, but they haven’t forgotten the adult with them. They say that none of them has made the sacrifices the coach has: They might have cooked some food for the rescuers, but he stopped eating so the kids could live.

He did not feel that starving himself was enough. He told the parents he was sorry. And so, in a letter to him that travelled through the three kilometres of cave separating them from their children, parents told the coach, “We want you to be relieved. Every dad and mom isn’t angry with you at all. And everyone understands and encourage you. Thank you for looking after the boys. Coach [Ekapol] went inside with them then you must come out, bringing them out safely as well.”

And his own aunt says this: “Don’t overthink or worry too much… Nobody blames you.”

After all, if the blame began with him, it is not clear where it would end. None of the children in the cave can swim. That is typical in Thailand: when children die here, they usually die in the water. Though statistics vary, drowning is said to be the leading cause of death among children in Thailand. It has launched programs offering swimming classes, and the death toll has been decreasing over the last decade. So Thais don’t blame their government, even if more progress had been made, they might have taught these kids to swim.

And Thais don’t blame their neighbour, even if he might have prevented the kids from needing to swim to live. One of these neighbours says she plans to run out from behind her chicken stand and scream with joy if—no, when—the coach finally comes back home. But another neighbour says she will sell him his chips and say only “hello” at her convenience store. She knows that if he lives he will want to live normally.