The Divided States of America

Red and Blue Americans have grown so dangerously far apart, they should be considered different ethnic groups 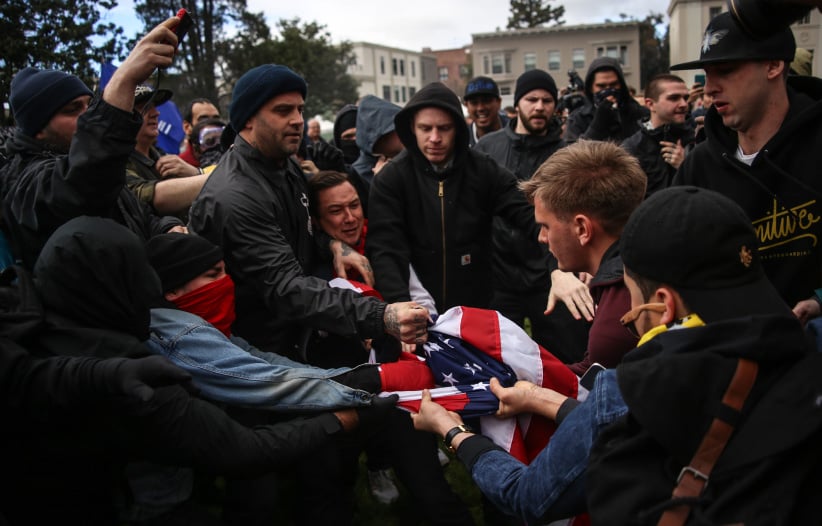 Anti-Trump protestors and the supporters of U.S. President Donald Trump battle over an American flag after violence broke out during a free speech rally in Berkeley, United States on March 4, 2017. (Joel Angel Juarez/Anadolu Agency/Getty Images)

The United States is no longer a melting pot; it has become a nation dominated by two very different and increasingly hostile ethnic groups. Their mutual interests are shrinking, their conflicts growing and the implications for long-term stability are dire.

The polling group FiveThirtyEight shared some important data this week. There were just 303 out of 3,113 counties where the electoral outcome between the Democrats and Republicans was within single digits. In 1992, there were three times as many. During the same time frame, the number of counties that were won by landslides increased tenfold. American voters have begun to clump together, to live in political enclaves where everyone is either a Republican or a Democrat. There are places where the next generation will grow up without being exposed to anyone who supports another political party.

The development of political ghettos is exacerbated by the growth of intellectual bubbles. People are increasingly getting their news from different sources. Up until the 1980s, most Americans relied on Walter Cronkite or the local newspaper. But with the growth of talk radio and the arrival of cable news, people began to segregate themselves. On the left, channels like CNN and MSNBC became popular. On the right, it was Fox and Rush Limbaugh.

The arrival of the internet and social media dramatically accelerated this. People began to isolate themselves into information bubbles where they only read news that reinforced their pre-existing world view. On Facebook, we have learned to mute those who criticized our party, or who rant about a policy we prefer. Our desire for looking into ideological mirrors is abetted by the algorithms that are used to populate our newsfeeds. These are increasingly adept at sending us only the information we like—in other words, whatever echoes what we already believe.

After the election, some scientists at the MIT Media lab mapped connections on Twitter and found that for the most part, Blue and Red America are utterly isolated. A data journalist on that team described the online world as “…one Balkanized by ideology and issue-interest, with little potential for information flow between the online cocoons.” Not surprisingly, the Pew Research Center has found the American public is becoming increasingly polarized along partisan lines, year after year.

Of course, this growing geographic and intellectual segregation also changes the people Americans send to Washington. The Lugar Center at George Washington University publishes a “Bipartisanship Index” that tracks the level of cooperation in the Senate. Not surprisingly, it has plummeted over recent decades and is at an all time low. This reflects other research that has shown party polarization is more severe than at any time in the last 140 years. The stark differences seen between Democratic and Republican politicians merely reflects the differences between the two different groups they represent.

These differences, between Red and Blue America, have become so deep, and so broad, they transcend party politics. Democrats and Republicans have become tribes; in fact, they are different ethnic groups. It is a mistake to think ethnicity is language or skin colour. It is defined by shared cultural and social values. And in this regard, Red and Blue America have very little in common.

In the United States, almost every aspect of life can be predicted based on who you vote for. Democrat? You are much more likely to be divorced. Republican? You are a much stronger believer in the need for a mother to stay home and raise the kids. Democrats have more sex, but Republicans are 50 per cent more likely to do it outdoors. Republicans are more religious. Democrats smoke more weed. Believe in God? Trust the police? You’re likely a Republican. Believe in gay marriage? Drive a Prius? You’re a Democrat. If you are watching SNL, you’re Blue. If it’s a home improvement show, you’re Red. Your partisan affiliation defines almost everything about you. 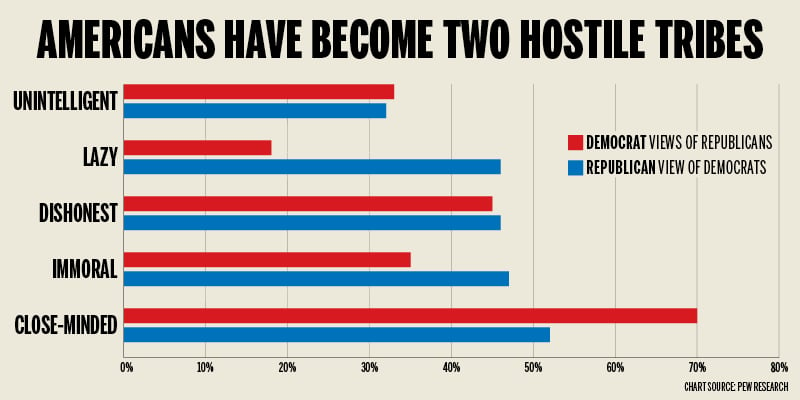 Not only are these two ethnic groups becoming more different, they are also growing more suspicious of each other. Another Pew poll found the majority of supporters from each party “fears” supporters from the other. Republicans see Democrats as immoral and lazy. And from the Democratic perspective, Republicans are dishonest and closed-minded.

America was once a melting-pot. It didn’t matter your language, your religion, or where you came from, once you stepped foot in the United States, you almost magically became “American”. It was a country where ethnic divides and animosities were left behind, in “the old country”. But now, after decades of increasingly isolating themselves into two partisan camps, Americans have become so polarized even their respective cultures are drifting apart. And what’s worse, these new ethnic groups see each other as hostile threats. America’s future is starting to look like Europe’s past.