Terry Glavin: Politicians, academics and activists around the world say Beijing has undermined its claim to sovereignty over Hong Kong by breaching its 1997 agreement with Britain. Will the Trudeau government join them? 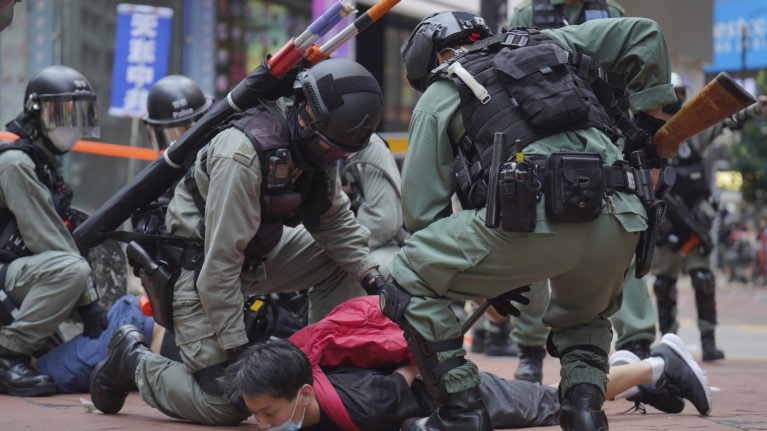 As thousands of angry Hongkongers defied the law and poured into the streets over the weekend in response to the Chinese Communist Party’s increasingly aggressive moves to finally enclose the semi-autonomous region within Xi Jinping’s police state, it looked very much like the former British colony’s storied and long-standing status as one of the world’s great, free cities was coming to a bitter and heartbreaking end.

At least 180 people were arrested on charges of participating in unauthorized gatherings after riot police broke up a march that was originally planned to protest Xi’s insistence that Hong Kong adopt his National Anthem law. The law provides for severe fines and jail terms of up to three years for mocking the People’s Republic of China’s anthem, “March of the Volunteers.” After a new “national security” law aimed at imposing direct rule over Hong Kong was unveiled last Friday at the National Peoples Congress in Beijing, the weekend protests took on greater urgency. Riot police deployed water cannon, pepper spray and tear gas to disperse crowds.

The national security law is widely understood to stand in direct contravention of Hong Kong’s mini-constitution, known as the Basic Law—the document enshrining the legal and political autonomy guaranteed to Hongkongers in Britain’s 1997 handover of the territory to Beijing. The new national security law authorizes Beijing to directly impose its own system of population control on Hong Kong, criminalizing any activities the Communist Party arbitrarily considers terrorism, treason, subversion or plotting with foreign organizations.

RELATED: Hong Kong protestors to democratic leaders: Stand up for us before it’s too late

As grim as Hong Kong’s prospects appeared over the weekend, there are some faint flickers of hope. The city-state’s future may come down to whether Xi would think twice about his manoeuvres if he were facing the severe economic penalties set out in the Hong Kong Human Rights and Democracy Act, adopted by a unanimous Senate vote and a 417-1 vote in the House of Representatives in Washington last November.

It remains to be seen whether U.S. President Donald Trump will make use of the sanctions and other measures under the Act, however. When the law came into force late last year, after intense lobbying efforts by Hong Kong’s young democrats, Trump said parts of the Act impinged upon his authority as president. “We have to stand with Hong Kong,” Trump said at the time, “but I’m also standing with President Xi. He’s a friend of mine.”

Even so, on Sunday, Robert O’Brien, the White House national security adviser, said the U.S. State Department would likely find it impossible to certify that Hong Kong continues to maintain a high degree of autonomy, now that Beijing is adopting measures that amount to a “takeover” of Hong Kong. If Secretary of State Mike Pompeo can’t justify that certification, it’s likely that the provisions of the Hong Kong Human Rights and Democracy Act would be triggered.

There is also the potential for a broader international response arising from a multinational, cross-party declaration led by Chris Patten, Hong Kong’s last British viceroy. By this morning, the statement had won the support of 226 leading legislators, former ambassadors and leading public officials from 25 countries, including several leading Conservative MPs from Canada. While Canada’s governing Liberals are noticeably absent from the declaration—Senator Jim Munson was the only Liberal to sign on—the proclamation has won the support of the current chairs of the foreign affairs committees of the United States, the United Kingdom, Australia and New Zealand.

The declaration calls Beijing’s latest move a “flagrant breach of the Sino-British Joint Declaration” that set out the 1997 terms of Hong Kong’s autonomy, which is supposed to be in force until at least 2047. “This is a comprehensive assault on the city’s autonomy, rule of law, and fundamental freedoms,” the proclamation states. “The integrity of one-country, two-systems hangs by a thread.”

If the world’s liberal democracies come to a consensus that Beijing has abrogated the Sino-British declaration, it follows that the liberal-democratic camp in the United Nations could no longer recognize the legitimacy of Beijing’s claim of sovereignty over Hong Kong. There is already a move afoot in the U.S. Congress to authorize the White House, at the president’s discretion, to recognize Hong Kong as an independent national state. There is also a corresponding viewpoint emerging among Hong Kong’s democrats that it’s either independence or total submission to Beijing.

British Human Rights activist Benedict Rogers, founder of Hong Kong Watch, said he hopes Patten’s declaration will be sufficient to give Beijing pause. “The death of democracy in Hong Kong should be of grave concern to us all. We hope that this international statement from policymakers across the political and geographic divide will send a clear message to Beijing that the world will not meekly consent to the dismantling of the ‘One, Country Two Systems’ model overnight.”

If the international community allows Beijing to get away with shredding the Sino-British Joint declaration and abrogating the terms of the 1997 handover agreement with impunity, Xi should be expected to turn his sights on Taiwan next, Charles Burton, longtime China expert and associate professor at Brock University, told me. “Once Xi has destroyed Hong Kong, I fully expect him to move on to Taiwan and damn the consequences,” Burton said.

Along with its unilateral moves against Hong Kong’s autonomy last week, Beijing dropped its usual references to the “peaceful reunification” of Taiwan with the People’s Republic. Beijing has conventionally declared the independent, self-governing country of Taiwan to be a temporary breakaway province of China. But Chinese Premier Li Keqiang told the National People’s Congress last week that Beijing would “resolutely oppose and deter any separatist activities seeking Taiwan independence.” The word “peaceful” was absent for the first time in Premier Li’s annual Taiwan report.

Burton said both Hong Kong and Taiwan together serve as a withering rebuke to the Chinese Communist Party’s insistence that democracy runs counter to the Chinese character. “The existence in Hong Kong and Taiwan of alternative Chinas to the CCP’s Stalinist dictatorship is a major threat to Xi Jinping. He insists that the CCP represents the interests of the Chinese people everywhere and is legitimated by Chinese culture and historical tradition, but the vibrant democracy and freedom of citizens in Taiwan and Hong Kong give the lie to that.”

In the meantime, Ottawa should adopt several long-overdue measures to come to Hong Kong’s aid, and also to safeguard Canadian sovereignty, says a coalition of Canadian Hongkongers. The recently-established Alliance Canada Hong Kong (ACHK) says it is long past time for Canada to acknowledge that by shredding the “one country, two systems” conditions underlying the 1997 handover, Beijing has already relinquished any legitimate claim it can make to sovereignty over Hong Kong. Like Taiwan, Hong Kong was never directly ruled by the People’s Republic.

“Hong Kong is no longer an autonomous region,” the ACHK declared in response to Beijing’s unveiling of the new national security law. “We demand the Canadian government and the international community to immediately revoke Hong Kong’s special administrative status. We must consider Hong Kong’s democratic future outside of the confines of the One-China fantasy.”

ACHK is asking Ottawa to: invoke Canada’s “Magnitsky” legislation to sanction specific human rights abusers in the Chinese government and in the administration of Hong Kong chief executive Carrie Lam, Bejing’s chief puppet in the Special Administrative Region; Offer humanitarian support to Hongkongers, Tibetans, Uyghurs, and members of other persecuted groups who qualify for asylum in Canada; take measures to address Beijing’s persistent interference in Canadian affairs by its subversion and influence operations in public and private Canadian institutions.

So far, however, the Trudeau government has gone only so far as to express “concern” about the crisis in Hong Kong. and has committed only to continue to “monitor” the situation.

Pressed by Opposition leader Andrew Scheer in the House of Commons today, Trudeau dodged several questions about what specifically Canada intends to do, beyond reiterating earlier statements about Canada’s hopes for a “de-escalation” of tensions. Trudeau said Canada stands with the people of Hong Kong and will work with allies around the world to “stand for human rights” there. Scheer said Beijing is trampling on the rights of Hongkongers, noting that it continues to hold Michael Kovrig and Michael Spavor as hostages, while Canada takes no action and instead persists in “a policy of appeasement.”

Trudeau again said only that Canada supports the human rights of Hongkongers, despite Scheer’s repeated questions about what specific measures his government intends to take in response to Beijing’s latest moves.