The G7 group shot, where Donald Trump can't hide from his height

The president claims to be 6-foot-3, but the traditional 'family photo' at the recent G7 summit suggests he's shorter than the 6-foot-2 Justin Trudeau 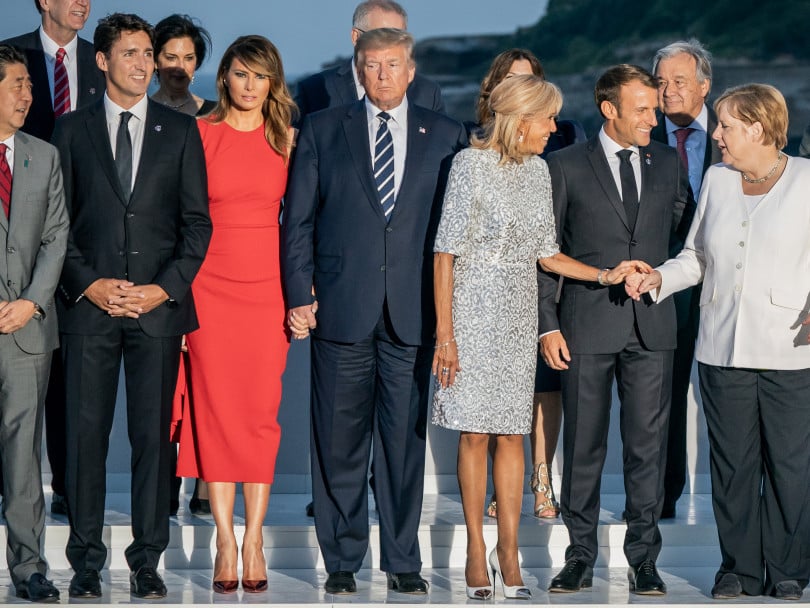 The heads of state and government of the G7, the guest countries and the heads of the international organizations stand together at the group photo on August 25, 2019, in Biarritz, France. (front row (l-r). Shinzo Abe, Prime Minister of Japan, Justin Trudeau, Prime Minister of Canada, Melania Trump and Donald Trump, President of the USA, Brigitte Macron and Emanuel Macron, President of France, Chancellor Angela Merkel (CDU). (Michael Kappeler/picture alliance/Getty Images)

U.S. President Donald Trump loathes G7 summits. He’s even asked aides if he had to attend this year’s meeting, hosted by French President Emmanuel Macron in the seaside resort of Biarritz. He likes foreign visits when he gets lavish welcomes, accolades and state banquets, like his visit to Britain in June. In contrast, the G7 is a series of meetings and discussions with only the odd meal to break up the day.

Perhaps another reason why Trump dislikes the G7 summit is the group picture of all the leaders together on a dais. Sure he gets a prime spot in the middle of the first row, but on that level platform, unlike the seated images that Trump seems to prefer at other venues, the heights and heft of those standing on that dais are immediately comparable, especially as the photographers and camera operators are positioned to capture straight, head-on images.

For the record, Donald Trump is 6’3 and weighs 243 lb., according to his annual physical in February. But on that G7 dais in Biarritz, those statistics look like one of his more than 10,000 false and misleading claims.

READ MORE: When the world stopped listening to America

On Sunday, as the sun was setting, he ambled over to the dais, going first to stand beside German Chancellor Angela Merkel. It was as though he wanted to stand between her and Macron, two leaders who are decidedly not of towering height.

Trump also seemed to try to put some distance between himself and Justin Trudeau, but was foiled because their spots on the dais were already assigned, with Macron directing Trump to his spot next to Trudeau.

Canada’s Prime Minister is one inch shorter than Trump’s official height. But with both leaders side-by-side on a level platform, even casual observers can see that Trump is shorter, by at least an inch or two—his bouffant hair style makes exact comparisons impossible. Even Melania Trump, 5-foot-11 before her towering heels, looks to be just a smidge shorter than her husband.

This must feel like déjà vu for Donald Trump. At last year’s G7 summit, held in La Malbaie, Quebec, the leaders’ group shot featured Trump beside his host, Trudeau. Even with the PM’s wide stance, which made him a bit shorter, in the head-on images taken by photographers and camera operators, Trudeau was obviously taller than Trump on that dais. “That number might be a stretch,” is how the Daily Mail delicately referred to Trump’s official height.

“Meek and mild”
"Dishonest & weak"
“Stabbed us in the back”
“Special place in hell”
… These are some of the statements Trump and his inner circle used to describe Canadian PM Justin Trudeau after fallout from the G7 summit https://t.co/7n1fIt4Jo1 pic.twitter.com/kDB1HioYsS

Many have doubted Trump’s official height and weight for a while. Last year, when he was four pounds lighter, at 239 lb., social media exploded with even more side-by-side comparisons, this time the president with athletes. To be fair, their muscle shows more than the president’s rather more rotund body. Trump’s only apparent exercise is golf—though it’s not exactly aerobic given he uses a cart, even driving right onto the greens to make shots.

Trump's medical exam says he's 6'3" and 239 pounds. Albert Pujols is 6'3" and 240 pounds. If the dementia tests are equally accurate, we are doomed. pic.twitter.com/fn0u1xzzjI

Even if Donald Trump may have been six-foot-three-inches at one point in his life, it’s hard to see how he’s currently that height, even though military doctors swear it’s true. After all, in 2012, he stated he was six-foot-two-inches when he got his still-valid driver’s licence from the state of New York (Politico got a copy of the legal ID in a freedom-of-information request.) It’s hard to imagine he had a growth spurt in his seventies. If anything, that’s the age when people begin to shrink.

Next year, the G7 summit will be in the United States. Trump has mused about hosting it as his Doral golf course in Florida. If Trudeau is still PM, it’s a safe bet that he’ll be positioned well away from Trump at that group photo shot.