Trump's best day comes on the eve of his impeachment trial

'How about my life?' the U.S. president asks a fellow billionaire after signing a trade deal with China. Answer: 'Unbelievable.' 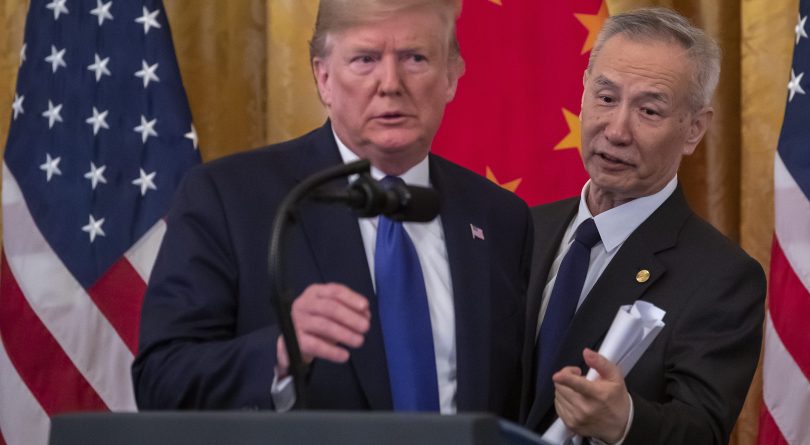 “The business of the American people is business,” President Calvin Coolidge famously said in the 1920s. A century later, had his successor paid attention to this credo and stuck to the affairs of commerce and construction that he was elected to enact, Wednesday might have been one of the best days of the best weeks of Donald Trump’s life and career. But then he wouldn’t be Donald J. Trump, tweeting, bleating, scheming and obstructing his way to the White House hall of shame.

So it was only four hours after the 45th president signed what he called a “landmark” trade agreement with the one-party government of the People’s Republic of China—and with his new NAFTA deal with Canada and Mexico scheduled to be approved by the U.S. Senate on Thursday—when a solemn troupe of partisan pall bearers carried the formal, damning articles of Trump’s impeachment across the Capitol and into the mitts of the senators who will sit as a jury on The Donald’s alleged high crimes.

The Chief Justice of the Supreme Court will arrive in the Senate chamber on Thursday to impartially supervise the president’s trial. Next Tuesday, after a pause for the Martin Luther King, Jr. holiday, the president’s accusers will begin to lay out their case. The trial may take a month or more, placing the president’s State of the Union address smack in the middle of the deliberations.

RELATED: The U.S. is sinking. Maybe it’s time for Canada to jump ship.

Dealmaker, hardballer, nationalist, narcissist—whatever Donald Trump is—and he can be, within a span of minutes, all of these things, and many more—all were in view on this amazingly bad/good January day.

At midday, in the East Room of the White House, Trump was drunk on his generalship of trans-Pacific trade, demanding and expecting and, perhaps, deserving credit for “righting the wrongs of the past and delivering a future of economic justice and security for American workers, farmers and families,” should the Chinese actually obey the strictures of the pact. Ignoring his prepared remarks, he riffed for more than an hour on everything from the Democrats’ impeachment “hoax” to his approval of a fireworks show above Mount Rushmore on the Fourth of July because, as everybody knows, stone cannot catch fire.

“You’re the best president ever,” Trump recalled being told by Lou Dobbs, the Fox Business mahatma, on one of those recent days when the stock market shattered its previous ceiling.

“Does that include Washington and Lincoln?” Trump said he hungrily pressed the tele-host.

Yes, he desperately wanted to be told, better than the Roosevelts and Jefferson and Reagan, and better than Silent Cal Coolidge, too.

Left gasping for breath during Trump’s incomprehensible and interminable riff were dozens of Chinese officials and journalists who may never before have been in the never-silent president’s presence.

RELATED: Why sudden NAFTA progress is thanks to the U.S.-China trade war

“It just doesn’t get any bigger than this not only in terms of a deal but keeping these two giants in harmony,” Trump gushed of the China deal. He vowed that he would immediately begin work on Phase Two of the compact and lift the punitive tariffs he imposed on Chinese goods. Or maybe he would wait until after the November election. Or not.

“No one’s ever done anything like this with the Chinese,” trade ambassador Robert Lighthizer had enthused to a small group of reporters earlier in the day, noting that millennia of Chinese insularity and suspicion of foreigners’ motives has not fully been eclipsed by a new generation of reformers.

“For people who don’t want to get along with the United States, this will be a bitter pill to swallow,” Lighthizer said.

It wasn’t very tasty medicine for Trump’s enemies on Capitol Hill, either. (These are the same people who will exult that they put one over on The Donald in the coming days when the United States Mexico Canada Agreement is signed into U.S. law, pending parliamentary approval in Ottawa.)

“We got a whole lot of words on paper,” sneered Sen. Ron Wyden, Democrat of Oregon. “This is just a repackaging of what China has been promising for decades.”

“Given the fact that China does these deals and then ignores them,” sniffed Sen. Chuck Schumer, Democrat of New York, “the real answer to the real deal with China is a new president.”

RELATED: Canada’s awful relations with China. Now there’s a committee for that.

Beginning Thursday, the Senate will possess the power and authority to make Mike Pence, the devout and obedient Veep, precisely that.

“This is the World Series and the Super Bowl of trade in one week,” exulted Sen. Rob Portman, Republican of Ohio.

On Wednesday, pending his constitutional eradication or salvation, The Donald was in an ebullient mood. At a luncheon following the signing of the China deal, he motioned to a fellow New York billionaire named Nelson Peltz.

“How about my life?” Trump asked, seeking yet more praise on yet another of his best-worst days.