Trump's hit on Soleimani exposed a lot of uncomfortable truths

Terry Glavin: Tehran's interference had tied NATO's Iraq mission in knots, and the idea of 'stability' had become an illusion 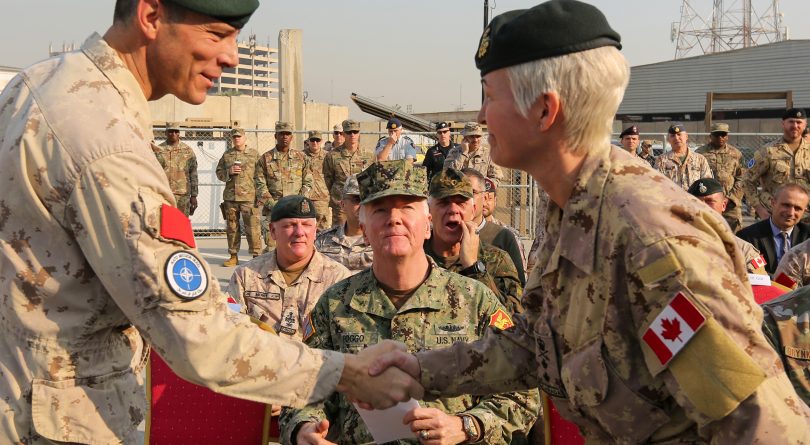 Following Sunday’s vote in the Iraqi parliament seeking the expulsion of American forces from the country, the multinational NATO-led mission in Iraq headed by a senior Canadian commander now figures prominently among the military and geopolitical applecarts suddenly overturned by the Trump administration’s obliteration of Iran’s global terror commander Qassem Soleimani last Friday.

Or so the story goes.

Not widely noticed is that the NATO military training and institution-building mission was already facing a looming crisis, and a dead end. Led by Canadian Maj.-Gen. Jennie Carignan, the NATO mission was on its last legs as a credible multilateral agent of “stability” in Iraq, no matter what U.S. President Donald Trump has or hasn’t just gone and done. It was only a matter of time before it was all going to unravel, because of a plainly untenable dilemma.

The NATO mission is supposed to provide logistical support, mentoring, military training and institution-building services to the Iraqi armed forces. But by last summer, divisions of the Iraqi military command—nominally answerable to Baghdad but loyal to Iranian Supreme leader Ayatollah Ali Khameini—were directly implicated in ongoing terror operations undertaken on behalf of the Quds Force, the terror-listed institution that Soleimani commanded.

RELATED: The U.S. has gone rogue, and Canada may be caught in the crossfire

That’s the insoluble conundrum that Canada and its NATO allies were facing long before last Friday’s fireworks, owing to the rapid advances of the Quds Force proxies in Iraq and the slow collapse of the Iraqi government into something approaching full-on failed state status. The Hellfire missile fired from an MQ-9 Reaper drone that incinerated Soleimani last Friday along with his senior Iraqi lieutenant, Abu Mahdi al-Muhandis, didn’t just come out of nowhere.

The NATO mission in Iraq is separate from the U.S.-led anti-ISIS coalition involving about 80 countries, including Canada, which has also suspended operations, at least for the time being. Most of the Canadian soldiers involved in that effort are safely based with the Kurds in northern Iraq, or are stationed in Kuwait, Jordan and Lebanon.

The status of that operation, too, was thrown into total confusion on Monday with the leak of a letter by U.S. Brig.-Gen. William Seely to the effect that U.S. troops, in the wake of Sunday’s vote in the Iraqi parliament, were pulling out of Iraq, fully, finally and imminently. Later in the day, U.S. Defence Secretary Mark Esper said that no such decision has been made, and the letter had been misconstrued.

But it’s the predicament facing the Canadian-led civilian/military NATO mission that exposes a darker picture that hasn’t been readily discernible in the NATO capitals, where the focus of attention has been on Trump’s crazy outbursts, along with roaring debates about the propriety and the implications of his decision to selectively assassinate the ayatollah’s second-in-command.

Established only 18 months ago at the invitation of the Iraqi government and drawing on about 250 Canadian Forces members, the NATO mission has been dodging its dilemma by taking pains to provide no direct assistance to any of the 40 mostly-Shia militias in Hashd al-Shabi, the umbrella group overseeing 120,000 fighters who have been formally integrated into the Iraqi military structure, at least in name. But for the past several months, that’s too fine distinction to have made much of a real-world difference.

Iran’s proxy militias have been growing in influence in Baghdad ever since the defeat of the Islamic State in Iraq in the final months of 2017. But the militias that helped fight ISIS back then filled the ISIS vacuum with scorched-earth tactics every bit as genocidal as the methods ISIS employed, and they’re now deeply embedded in Iraq’s military and security establishment.

Muhandis, the Quds Force proxy killed along with Soleimani last Friday, was not just a bad character sanctioned under the U.S. Magnitsky laws. He wasn’t just a lowlife terrorist ex-con in command of the powerful Kataib Hizbollah militia, a U.S. terror-listed organization and self-described jihadist army.

Kataib Hizbollah operates openly in Iraq, happily accepting the “outlaw” status the Iraqi government claims to pin on independent militias, and by last Friday, Muhandis had risen the post of deputy commander of the 40-militia umbrella institution that the Iraqi government has  normalized with military ranks, salaries equivalent to the main Iraqi chain of command and a $2 billion annual stipend.

The Iraqi militias mobilize their own pro-Iran political parties, and generally run their own show, and beginning last November, the militia commanders began to take full advantage of a crisis brought on by a dramatic and unprecedented pro-democracy uprising in Iraq that Qassem Soleimani took a determined and personal interest in crushing.

The Canadian-led NATO mission is supposed to be about guiding Iraqi military leaders in the finer points of war law and humanitarian conduct. But long before last Friday, those same Iraqi officers had been deeply implicated, along with Iraq’s more fervent Quds Force proxies, in mowing down at least 460 protesters as part of a complex strategic response devised by Soleimani himself.

The general outline of Soleimani’s strategy has been known to Iraqi and Iranian dissidents for some weeks, but it wasn’t until last weekend that the Reuters news agency hammered down the details. The Reuters account relies on Iraqi Shia politicians, Iraqi security sources, militia commanders, and senior officials close to Adel Abdul-Mahdi—the Iraqi prime minister who tried and failed last summer to rein in the militias. Abdul-Mahdi resigned on Dec. 1 to placate the protesters, but later agreed to stay on until the Iraqi parliament selects a successor.

The Iraqi uprising was part of a wave of hundreds of thousands of pro-democracy protesters that had risen up in Lebanon and Iran itself, openly devoted to the overthrow of the Khomeinist regime in Tehran and the regime’s proxy rulers across the region. Cheered on by the revolutionary democrats of Syria who were still alive, the region-wide revolt was an unprecedented challenge to the Khomenists, who had become accustomed to operating with the free hand Barack Obama’s administration had more or less granted them throughput the Middle East, in service of his 2015 nuclear-deal rapprochement with Iran’s ayatollahs.

RELATED: The uprising in Iran: ‘These people have nothing to lose. They’re fearless now.’

Obama’s policy effectively gave the Quds Force licence to consolidate and expand its operations—directing Bashar Assad’s bloody war in Syria, funding and arming Hezbollah in Lebanon, Hamas and Islamic Jihad in Gaza, Houthi militias in Yemen, paramilitary Shia militias in Iraq, and so on. After Trump walked away from the deal two years ago, the Quds Force began to turn Iraq into an open proxy-war battleground, pitting its affiliated paramilitaries against the Americans.

Two weeks after the Iraqi uprising kicked off, Soleimani arrived in Baghdad to meet with Iraqi military officials, and with his loyalists among the paramilitaries, most notably Muhandis. The plan was cunning, cynical and straightforward. It wasn’t just about replicating the Islamic Revolutionary Guards Corps’ barbarism in Iran, where internet connectivity had been shut down and protesters were being slaughtered in the streets en masse—perhaps 1,500 murdered, by the end of 2019. The plan involved radically ramping up attacks on American targets in Iraq.

The Quds Force would supply sophisticated weaponry—Katyusha rockets and shoulder-fired missiles capable of bringing down helicopters. The whole show was to be run by Muhandis and his Kataib Hezbollah outfit. The attacks would provoke an American military response, and across the region, but especially in Iraq, people would abandon their hopes for democracy and governments freed of malign Khomeinist influences, and everybody would be enraged about the Americans instead.

It didn’t quite work out as Soleimani planned. It proved to be the death of him, and of Muhandis, his senior Iraqi consigliere. But it certainly has incited a great amount of rage about Donald Trump, who is, after all, quite easy to get enraged about.

At their emergency meeting in Brussels on Monday, NATO ambassadors decided to maintain the Canadian-led mission’s suspension, with all personnel confined to base, at least until the immediate security situation in Iraq sorts itself out. NATO secretary-general Jens Stoltenberg called for restraint and de-escalation, but he singled out Iran for its “violence and provocations” going back several months.

RELATED: As protests deepen in Iraq, Canada is caught in the middle

Separately, European Commission President Ursula von der Leyen blasted Iran for its “repeated provocations,” referring to the hijacking of oil tankers in the Strait of Hormuz and bomb attacks on tankers in the Gulf of Oman, and drone attacks on Saudi pipelines, and the rocket attacks against U.S. targets in Iraq that have intensified since last summer.

Everybody says they want stability. Prime Minister Justin Trudeau said Monday he will continue to talk with his European Union partners “to promote stability in Iraq and the wider region.” In Beiing, where Iranian Foreign Minister Javad Zarif spent New Year’s Eve, the Communist Party called for “stability and peace.”

But there hasn’t been stability or peace for the past nine years in Syria, where the Quds Force has helped direct a Russian-backed war on behalf of Syrian dictator Bashar Assad that has led to the deaths of a half million people. Or in Yemen, which has been turned into a global humanitarian disaster zone, with massacres and famine and cholera that closely reflect Syria’s agonies.

Or in Iran, with the massacres of anti-regime protesters in recent weeks in a revolt more widespread than anything the Islamic Revolutionary Guard Corps has managed to crush over the past 40 years. Or in Lebanon, were a democratic uprising has brought the country to a standstill, and the government remains in the vice grip of Hassan Nasrallah’s Iran-backed Hezbollah.

Or in Iraq. There hasn’t been much stability or peace there either.

A number of applecarts are suddenly overturning in the aftermath of that Hellfire missile strike last Friday. Stability wasn’t one of them.