Will Canada stand with Uyghurs—and against 'modern slavery?'

Some of the world's biggest brands are benefitting from the forced labour of Uyghurs in China, reports say. A bill before Parliament would target those companies and their products. 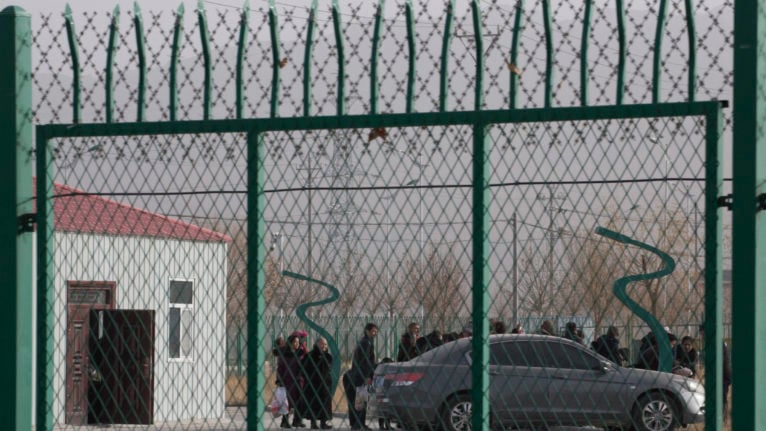 A file photo of he Artux City Vocational Skills Education Training Service Center in Xinjiang, where Uyghurs have been detained for, among other offences, having too many children. (Ng Han Guan/AP)

While the Trudeau government is coming under increasing pressure to extricate Canada from commercial supply chains compromised by slave labour in China, a frustrated senior Liberal MP says the Prime Minister’s Office appears to be ignoring mounting evidence that China’s persecuted Uyghur minority, after being rounded up into re-education camps in the northwestern province if Xinjiang, is now being corralled into industrial gulags to satisfy the needs of global corporations.

“We simply cannot be a nation that professes what we purport to profess and continue to turn a wilful or negligent blind eye to the evidence of what is clear is going on,” says John McKay, chair of the House of Commons Standing Committee on Public Safety and National Security. “But sometimes, governments don’t see what’s blindingly obvious.”

For two years, McKay has been attempting to push Parliament to adopt a new law, the Modern Slavery Act, which would require corporations doing business in Canada to ensure their supply chains are uncontaminated by forced labour and child labour. The law would provide for fines of up to $250,000 for violators and amend the Customs Tariff to allow the Canadian Border Services Agency to ban slave-labour goods from entering Canada.

McKay first introduced a private members’ bill proposing the law in 2018. Last year, before Parliament was dissolved for the October election, the Standing Committee on Foreign Affairs and International Development proposed such a law, and Marie-Claude Bibeau, who was International Development minister at the time, agreed to stakeholder consultations. That effort has now been passed on to Anthony Housefather, parliamentary secretary to Labour Minister Filomena Tassi. In an effort to move things along, earlier this year, Senator Julie Miville-Dechêne introduced McKay’s bill in the Senate.

And there it sits.

“If I were looking at royal assent by this time next year, I’d be dancing in the streets, presuming the government survives,” McKay told me. “It’s tough.”

The absence of an effective anti-slavery law in Canada was brought into dramatic relief last week when Bill Matthews, the deputy minister of public works, told the Commons government operations committee that Ottawa has no way of knowing whether suppliers relying on Uyghur slave labour are benefitting from the $2 billion in new spending on personal protective equipment required to cope with the COVID-19 crisis. Most of new money is being spent in China. Liberal and Conservative MPs said they were shocked to learn that Ottawa expects Chinese suppliers to “self-certify” that no forced labour is involved in PPE production.

RELATED: Where is the outrage over the plight of China’s Uyghurs?

But the slavery issue doesn’t arise only in government purchases of PPEs, McKay said. It arises across the board in trade with China. “We are in effect cutting our own throats,” McKay said. “There’s not a snowball’s chance in hell that we can manufacture products at a price point that is competitive with the price point that China has to offer. We’re actually working against our own economy. It is ultimately not in Canada’s best interests, our moral best interests, or our interests writ large, or from a national security standpoint, an economic standpoint, or from a health standpoint, or an overall societal standpoint.”

Last week, nearly 200 human rights and labour organizations from 36 countries launched a campaign to secure formal commitments from the world’s major clothing brands to sever contracts with suppliers implicated in Uyghur slave labour. Beijing’s archipelago of “labour transfer” operations arise from the detention centres and re-education camps where the Chinese Communist Party has interned more than a million Uyghurs and other Muslim minorities in their homelands in Xinjiang, purportedly to suppress religious and separatist militancy.

Campaigners estimate that 90 per cent of China’s cotton comes from Xinjiang, and one fifth of all cotton garments sold worldwide contain cotton or yarn from Xinjiang. But the corporations implicated in Uyghur forced labour are not just major garment brands and retailers like Adidas, Abercrombie & Fitch, Ralph Lauren, Tommy Hilfiger and Calvin Klein. Earlier this year, in a major investigative report titled “Uyghurs for Sale,” the Australian Strategic Policy Institute (ASPI) found that at least 80,000 Uyghurs have been forced from Xinjiang and conscripted into factories across China where they are made to work in production for 83 international corporations, including Samsung, Apple, BMW, Sony, and Volkswagen.

Mehmet Tohti, the Canadian representative for the World Uyghur Congress, said he appreciates McKay’s efforts to bring Canada in line with modern anti-slavery laws already in force in the United Kingdom, the United States, France, Germany, Italy and Brazil. McKay is not like most Liberals, Tohti said: “Their response is standard. They all stick to talking points. They repeat like parrots whatever the government says. It’s really difficult to understand those people.”

RELATED: The people of Colorado just voted to abolish slavery—here’s why

Here’s where Tohti differs with McKay.

The Uyghur crisis has to be addressed specifically, and fast, Tohti said. The World Uyghur Congress is hoping Canada will replicate a bipartisan initiative in the U.S. Congress, the Uyghur Forced Labour Prevention Act, spearheaded by Massachusetts Democrat James McGovern and the Republicans’ Marco Rubio. Their proposed law would declare all goods relying on materials originating in Xinjiang to be the product of slave labour unless otherwise proven, shifting the burden of proof in the existing rules under the 1930 Tariff Act.

“It is shocking that we have not seen any steps taken in Canada to ban products that have entered Canadian markets through supply chains that use Uyghur forced labour,” Tohti said. “Canadian consumers continue to buy these products, unknowingly.”

And here’s where McKay sides with Tohti.

“If COVID has exposed anything it has exposed our unhealthy dependency upon products made in China, and I think it’s exposed vulnerabilities not only in PPEs but in vaccines and various other health supply chains that leave us hugely vulnerable as a nation to the political whims of the Communist Party of China. And I just don’t think that’s a viable position for Canada to be in, and that’s aside from the slavery issue.”