Will Conrad Black be pardoned by Donald Trump?

The Office of the Pardon Attorney says he hasn't applied. And Black calls the speculation 'bunk'. But they have a history and reasons to help each other. 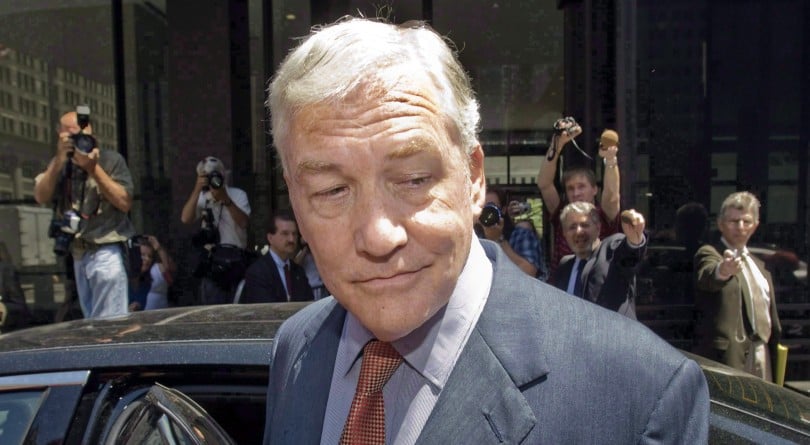 Conrad Black has not applied for a pardon from U.S. President Donald Trump and does not wish to say if he will do so. “You are correct that no pardon has been applied for, and I have no comment on the subject,” Black wrote in an email late last month. “The public speculation about it that I have seen is bunk.”

Lord Black of Crossharbour, who once regularly socialized with royalty and billionaires, spending vast amounts on a jet-setting lifestyle as the proprietor of the international Hollinger newspaper empire, was brought low by a fraud conviction in 2007 and spent three and a half years in the Coleman Federal Correctional Complex as Inmate 18330-424.

Now residing in Toronto, living as a tenant in the opulent Bridle Path home he was forced to sell, Black spends his time writing, often praising his old friend Trump in the pages of the National Review and the National Post.

Black lauds him as a visionary in his most recent book, Donald J. Trump, a President Like No Other, which has led some to speculate that he may be angling for a pardon from the U.S. president. But the Office of the Pardon Attorney said in an email last month that he has no current application on file.

“Mr. Black’s clemency petition C59362 was closed without presidential action on May 28, 2009, and he does not have a petition pending with the Department currently.”

In 2009, when Black was in prison and George W. Bush was getting ready to clear out of the White House, Black’s friends, including Brian Mulroney and Tony Blair, applied pressured, seeking clemency, but Bush declined to lift a finger for him.

But some believe Trump will do what Bush wouldn’t do. “I have no doubt that Donald Trump will pardon Conrad Black before his presidency ends,” says Toronto defence lawyer Steven Skurka, who wrote a book about the trial. “No doubt at all.” Skurka thinks Trump will want to help his old friend.

Until 2011, when he sold it for $23.3 million, Black had a home a five-minute drive from Trump’s Mar-a-Lago mansion in West Palm Beach. “Conrad used to like Palm Beach a lot,” says Ken Whyte, a former media executive who launched the National Post with Conrad Black in 1998 and a former editor of Maclean’s.

“He once told me that the first time he was there he’d been walking down the street and he saw one Rolls Royce crash into another Rolls Royce and he thought to himself it was the only place in the world that was likely to happen and he instantly felt at home there. But it’s not something he talks about now. I’ve never heard him say that he misses the Palm Beach crowd.”

In 2003, When Hollinger shareholders were demanding to know where their money was going, and Black and his wife, longtime Maclean’s columnist Barbara Amiel, were living a famously opulent lifestyle, Black turned to Trump for help.

Black emailed Trump, asking him to speak up for him at the 2003 Hollinger shareholders’ meeting, which Trump did. He called for his help again, in 2007, during his trial, when the defence was  seeking to explain why Hollinger picked up two thirds of the tab for a $62,869 birthday party for Amiel at La Grenouille in New York.

Trump was prepared, apparently, to testify that he and Black discussed a Chicago property deal at the party, which might have explained why Hollinger picked up the tab, but the defence didn’t call him, because when Black emailed him, he attacked the prosecution’s case, opening himself up to charges that he sought to influence a witness.

That Trump was willing to help meant a lot to Black, Skurka says. “If you look back at that time, he was a pariah. And Trump was going to attach his name to someone who was very likely going to be convicted of a serious criminal offence. And Trump did that. And Black will always remember that.”

Skurka thinks that connection explains why Black keeps writing in praise of Trump.

Black bristles at the suggestion that he is praising Trump because he wants a pardon. In an interview promoting his Trump book in June, he appeared troubled when TVO’s Steve Paikin asked him about speculation that he’s sucking up to Trump in hope of winning a pardon.

“I think that would be a mealy-mouthed and almost a dishonorable thing to do,” he said. “I would not praise the president in order to get something from him.”

Whyte said in an interview that Black is not losing any sleep over the matter. “I think he’d like to be pardoned. I don’t think it’s something he spends a lot of time worrying about. He’s writing books. He’s building businesses. He’s busy.”

But lawyers and journalists who followed his case are skeptical.

Former prosecutor Jacob S. Frenkel, who was a frequent commentator during Black’s trail, points out that the fact that Black has not applied for a pardon may not be as meaningful as it seems, because Trump does not feel bound as his predecessors did by the bureaucratic process.

The process “is entirely outside the public eye, so it’s very easy for him to deny making a request while he or people close to him could very well have made requests,” he said in an interview. “It’s easy for Conrad Black to project a denial of such a request but the mere fact that he sought a commutation of his sentence suggests that it would be in his interest, his personal interest, to pursue a pardon.”

Frenkel is sure Black wants a pardon.

“Absent a pardon, he remains a convicted felon in the United States for corporate fraud and I would imagine that he would want to do everything he can to have that stigma removed.”

Trump, who appears obsessed with settling scores with Robert Mueller and James Comey, might want to pardon Black to get at Peter Fitzgerald, the man who prosecuted Black, who is close to Mueller and Comey. When he mused publicly about pardoning other felons who were prosecuted by Fitzgerald and Comey—such as Martha Stewart and former Illinois Governor Rod R. Blagojevich—he did not mention pardoning Black.

David Adler, president of the Idaho-based Alturas Institute, says that Trump’s pardons have so far been transactional, like everything else he does. So if he pardons Black, it will be because he thinks it will help him.

“If Trump were to pardon Black it would be a reflection of Black’s craven flattery of the president as seen in his book and articles striking Trump’s ego, and an expectation that Black would somehow support Trump’s Reelection bid,” Adler said.

In his interview with Paikin, Black said that he had not spoken to Trump since he became president, but he has received messages letting him know that the president “has expressed his appreciation of some of the things I wrote.”

Tom Bower, a British journalist who wrote an unflattering book about Black and Amiel, thinks Black desperately wants a pardon, but doesn’t see any reason for Trump to do it.

“I can’t imagine why he should want to pardon him. I mean, when Clinton pardoned Marc Rich, there was an agenda that we all know. Why should he? What will be the advice? That he was innocent. Well, he wasn’t.”